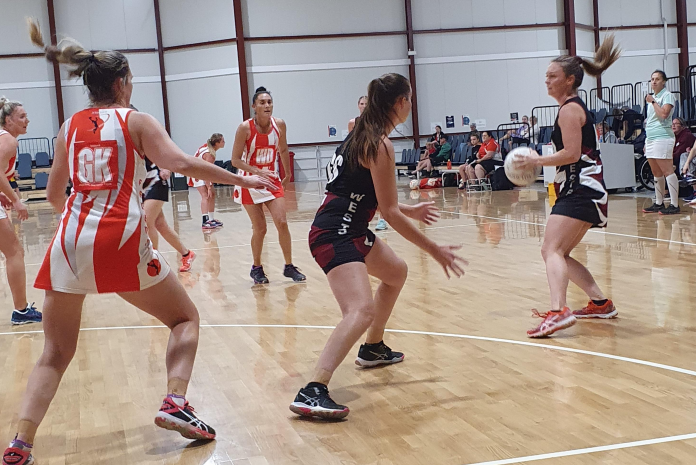 Massive wins by the top two KFC Alice Springs A-Grade netball teams emphasised the gulf in talent that exists in the sport.

But there were a couple of patches in the games when Wests were able to go goal-for-goal with the reigning six-time premiers.

Another bright aspect for Wests was the performance of Katelyn Douglas after coming on at goal attack in the second half.

Douglas played for Wests five years ago and recently returned to Alice Springs and decided to resume her netball career with Wests.

“I grew up in Victoria and lived in Alice Springs for a year and liked it so I was always going to come back,” she said.

“It’s good that some of the girls I played with before are still here at Wests so I slotted right back in.

“We can always get better, you are always learning.”

Federal welcomed back Carly Ryan, Simone Tribe, Phoebe Wilcox and Ailis Nolan to the side which narrowly defeated Rovers the previous week.

The team was straight into action with Wilson and Tribe combining in the attack circle to finish the control of their up-court colleagues and score eight goals to one in the first minutes.

But scoring was even for the rest of the quarter with Wests adding six goals to Federal’s seven.

Wests’ shooter Nicole Ryan made the most of her opportunities scoring all her team’s goals.

Tribe, playing her second game for the day, left the court with muscle tightness in the second quarter which forced Federal to reorganise the side with Crystal Dixon moving from wing defence to goal attack and Dana Schembri taking over the defence role.

Dixon goaled with her first touch in the attack circle while Wilson went on her merry way scoring 13 of her game tally of 49 goals at 87.5 per cent.

Wests, with Douglas troubling the Federal defence with her movement in the circle, had its best term in final quarter scoring eight goals but Federal remained in control with 16 goals with Wilson netting 15.

Angels were below full strength and could not stop the Rovers rampage as Rovers scored eight goals to one in the first five minutes set the tone of the game.

The top four B-Grade sides consolidated their positions with comfortable wins against teams at the bottom end of the premiership table.

There was a goal fest in the B2-Grade. Undefeated Rovers Complete Construction led the way with a 60-24 win against Wests Loco Burrito.

Neata Glass Giants had a third win for the season against Rovers Spritzers, 37-31.

The 17-and-under clash between undefeated Giants Bark n Bath and Wests LinkUp was billed as the match of the day.

It did not disappoint with Giants coming from two goals down at half time to win 30-27.

A superb third quarter by Kyah Purtic, scoring seven of Giants’ 11 goals for the term, was the telling factor.

Seasons ASYASS had a big day in the 15-and-under grade scoring 73 goals in the 60 minutes against RoversRascals.