The Alice Springs native title body may seek the return of nearly $700,000 in cash, and of shares in the Yeperenye shopping centre worth $400,000 in annual interest, which were transferred to other entities apparently without proper authority.
This is revealed in a document obtained by Alice Springs News Online. It was prepared for a meeting between the native title body, Lhere Artepe Aboriginal Corporation (LAAC), and what has become known as the “Enterprise Group” earlier this year, in particular some directors and the Public Officer of Lhere Artepe Enterprises Pty Ltd (LAE).
A spokeswoman for the Enterprise Group, Sally McMartin, responding to our request for comment, says: “There appeared to be monies owing to LAAC – the LAE Directors were not however aware of the past arrangements nor for what purpose the monies were used nor any past arrangements around repayment.
“The  LAE Board sought from LAAC some advice and documentation  of the ‘Loans’ and the amounts of each loan because these numbers were also not firm.
“LAE Board subsequently advised LAAC Directors that LAE Board could not source loan agreements nor easily identify where monies had been received and for what purpose. Board minutes could not be found in LAE’s administration files.”
Legacy of past management
The transactions date back to the management of LAAC by Darryl Pearce (pictured),  when he also played a major role in the creation of several other entities over which LAAC had no control, although they bore its name.
All or some of these new entities became involved in the construction of the Mount Johns subdivision on land subject to an Indigenous Land Use Agreement, negotiated by LAAC, under which native title holders were given freehold title to half the land in exchange for extinguishment of native title over the whole development area.
The following is an extract from the briefing document obtained by the News, except for sub-headings and explanatory notes from the editor in square brackets:-
This brief provides background information and suggested areas of focus for those discussions [between LAAC and the Enterprise Group].
It is recommended that the discussions focus on identifying areas of mutual interest and ways of working together more closely. Secondly and most importantly [it seeks] to resolve the issues surrounding loans made to the Enterprise group in 2010/11.
The loans are a crucial issue as the 2010/11 Audit report for the Lhere Artepe Aboriginal Corporation identifies the following loans were made:-
Lhere Artepe Enterprises Aboriginal Corporation – Discretionary Trust – $281,529, and Lhere Artepe Enterprises [Pty Ltd, of which NT Deputy Administrator Pat Miller is the chairperson] – $393,214, a total of $674,743.
It is understood that no agreements were made in relation to these loans but that the funds were transferred to complete the purchase of the IGA supermarkets.
[The Eastside, Flynn Drive and Hearne Place neighbourhood supermarkets were purchased for $14m including a $6m grant from the Federal Government controlled Aboriginal Benefits Account.]
How did the transfer occur?
As there is no formal connection between Lhere Artepe Aboriginal Corporation and the Lhere Artepe “Enterprise Group” it seems strange that such a transfer would occur without an agreement to repay or an equity share in the enterprises in question.
The only connection seems to be a determination by the former CEO of LAAC [Mr Pearce] to build a commercial empire. It is understood he was employed at that time by LAAC and was later employed by the Enterprise Group.
There appears to be a dispute by the directors of the “Enterprise Group” in terms of whether the transaction ever occurred or if they did, whether there i 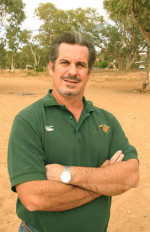 By ERWIN CHLANDA There have been further increases in crimes against the person, Commander Craig Laidler told media this morning, but the rise is less...
Read more
Issue 8

By JULIUS DENNIS A survey filled out by 110 hospitality businesses, 25% of the Hospitality NT membership, has found there are over 7000 workers needed...
Read more
Issue 8

By KIERAN FINNANE An explosive sense of “who we are” radiates from the recent work by the Tennant Creek Brio, showing at Raft Artspace. It...
Read more