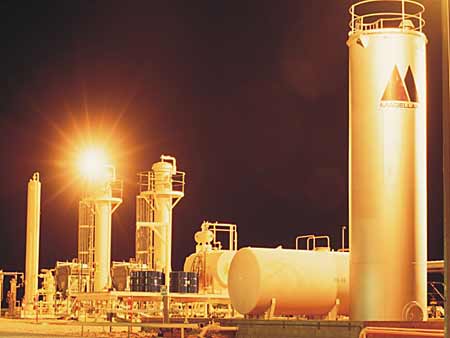 The oil and gas producer Santos has plans – yet to be “fully approved” by the company – of drilling 23 wells in the Mereenie field whose known reserves are close to being exhausted.
Gas from the fields west of Alice Springs has stopped flowing to Alice Springs and Darwin because the Power Water Corporation has stopped buying it.
And crude oil production is down to “a couple of road trains a week,” says the new NT regional manager of Santos, Andrew Eastick.
The oil is trucked to the deepwater port of Port Bonython near Whyalla in South Australia.
Santos is the operating partner of the consortium owning the Mereenie field.
Mr Eastick says gas is currently re-injected into the ground where it helps with production of oil, forcing more of it to the surface.
He says the remaining known gas reserves could still play a role in the NT by meeting a quarter of the requirements of the Gove bauxite mine and alumina refinery for the next 10 years.
The company is also gearing up for 1500 km of seismic work in the Simpson desert and south of Alice Springs, following a farm-in deal with Central Petroleum.
It will be a search for gas and oil, not coal, which had been Central’s earlier focus.
The Alice Springs News Online put the following questions to Mr Eastick and he promised to investigate and provide answers next week: “Can you confirm whether Mereenie crude, after a fairly simple process of removing sand in a centrifuge, can be used in diesel engines?
“And how much would you sell the crude to someone setting up such a plant in Alice Springs?
“We used to have a refinery here and now that diesel in Central Australia costs between $1.70 and $2, who knows, someone may give it another shot.”
CORRECTION March 31: Santos became the 100% owner of Mereenie in 2011.
PHOTO: Archival shot of the Mereenie installation.