Macklin opens door to grog in Aboriginal communities, brings in 'assessors' to check pubs in Alice 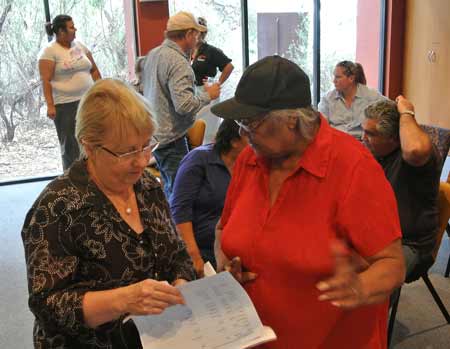 UPDATED at 4.30pm on Wednesday

The Federal Government’s new Alcohol Management Plans could open doors to permitting alcohol in communities that are currently dry, while in Alice Springs “assessors” will be looking at “two licensed premises” to see whether “they are causing harm to the community”.
These initiatives were announced by Indigenous Affairs Minister Jenny Macklin today and yesterday.
Police will be required to enforce the individual Alcohol Management Plans once they are put in place by communities, under a detailed protocol set down by the minister.
The initiative, part of the 10-year, $3.4 billion Stronger Futures in the Northern Territory package, reserves for the Minister the right to sign off on the plans, but is putting the final say over banning grog, or lifting the bans, into the hands of the communities.
In Central Australia most of the Aboriginal communities are currently dry.
The initiative does not rule on a floor price for alcohol, but a spokesman says it is under consideration.
It does not require the re-introduction of the banned drinkers register, abolished by the new NT Government. The onus is on the Territory government, says Ms Macklin, to bring back the register.
She says she had asked the NT Government to support her proposal for assessors to look at the licensing and business practices of two  venues not named in her media release, but tipped to be the venues known as the animal bars: “However, if the NT Government is unwilling to meet their responsibilities, the Australian Government is prepared to meet ours.”
Ms Macklin says the Australian Government is investing more than $1.8 million to enable the local BushMob rehabilitation service to relocate and expand its facility which delivers round-the-clock care, as well as education and counselling to help overcome alcohol, petrol-sniffing and substance abuse.
The funds will lift the service’s capacity from five to 20 beds.
Meanwhile “vital community infrastructure” will be upgraded in the Utopia homelands in the with a $4.36m expenditure, as well as $4m for the Centre for Appropriate Technology “to deliver a range of projects to help families in Utopia live more sustainably”.
Ms Macklin says: “These will include critical work to make housing safer, helping residents to reduce their energy consumption and improving the safety and reliability of the local water supply.”
Utopia will be benefitting from a range of other measures:-
• A police station at Arlparra, staffed as part of the additional 60 officers funded through Stronger Futures;
• A night patrol service operating from Arlparra;
• A primary health care service operated by Urapuntja Health Service;
• Increased food security through a licensed community store at Arlparra; and
• The continued provision of municipal and essential services across the homelands.
Ms Macklin is pictured in Alice Springs today with Rosalie Kunoth Monks at the Centre for Appropriate Technology after announcing a the Utopia initiatives.