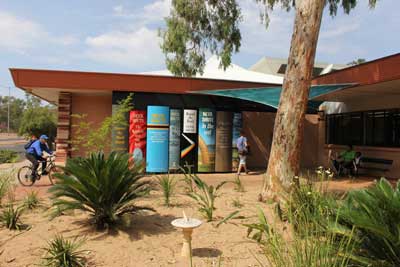 From a distance, it looks like a row of softdrink dispensing machines, but up close it is revealed in all its glory as a heavy-handed piece of signage. Taking its cue from the Big Banana and the like, it’s a row of Big Books, there to hit you over the head with the fact that this is a public library.

I had entertained high hopes of a beautiful new entrance to the library when I learned in council papers that two of the town’s leading artists, Pip McManus and Elliat Rich, both with a strong record of work in public places, had been asked to present their conceptual designs for the project to the council’s Public Art Advisory Committee. I had also heard this presentation being referred to in council meetings as “a Master Plan”.

The papers record that they proposed a sandstone wall at the entrance, with writings carved into the stone as a feature, as well as a sandstone “welcome mat” with signage in steel lettering. The sandstone would have related well to the existing sandstone elements of the Civic Centre and reflected the natural beauty of the local landscape. The texts, we can imagine, would have reflected something of the cultural range of materials to be found inside the library. 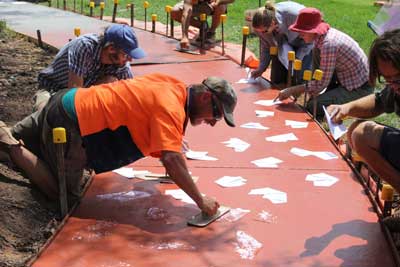 The artists also proposed a pathway that would orient people towards the new entrance on the riverside of the building. This pathway would be textured with “a material resist” and when it rains embedded images would “come alive with stories”. This part of the project, credited to Rich, is underway. Contractors and a “working bee” team laid and textured the path last Friday. It winds from Gregory Terrace across the lawns, starting as a normal grey concrete path, shading into red and with the textured effect gradually emerging and fading.

Following the path, you arrive in the courtyard from which the fence and gate have been removed. There is existing vegetation including a tall graceful river red gum, which connects the site well to the river that it now faces.

And then there are the clunky Big Books, crowding onto the small courtyard. Apart from their general ungainliness, there is also the matter of the message that these ‘books’ send.  All eight of them are by Neville Shute of A Town Like Alice fame. So, one author, a white Anglo-Saxon male, who died in 1960. The library is named after Neville Shute and A Town Like Alice is part of our heritage. But is this the kind of aging mono-culture that we want to signal can be found inside? 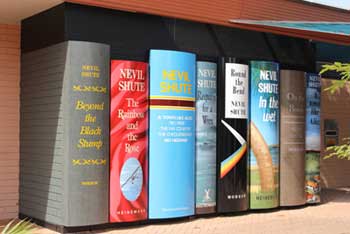 Over the years the library has developed as a vital, multi-cultural communal space in a town where there are not too many of them. It also tries to keep abreast of the rapid changes in the way people consume information. The Internet and digital media are all part of what is on offer there and responsible for attracting many of its visitors. It places a strong emphasis on children and young people, in its collection and activities. The Big Books do nothing to reflect all of this.

According to CEO Rex Mooney the ‘books’ are part of the overall library refurbishment which began “prior to the calling of [art] works and the Master Plan”: “As an operational project this did not require consultation with the Public Art Advisory Committee (PAAC),” he says.

That’s a shame because I’m sure the the Public Art Advisory Committee would have advised against the Big Books and had a better idea.  And what is the point of commissioning and paying for a “master plan”  if you are going to start doing works – of high visual impact – in a piecemeal fashion that do not take it into account?

Council is in charge of the revitalisation of Todd Mall. A great deal of thinking, planning and design work has gone into this. Let’s hope ‘bright ideas’ under the heading of “operational projects” don’t undermine it.