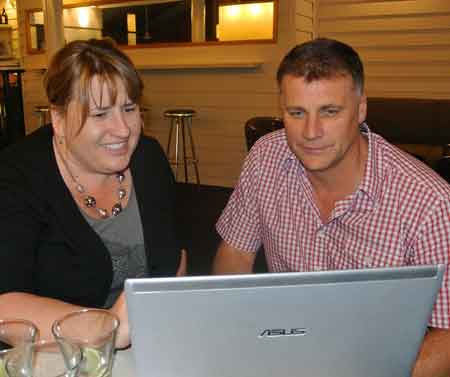 By ERWIN CHLANDA
A return of public sector investment in tourism to at least 2008/09 levels, marketing better suited to new realities, more money for parks and roads, a resolute push for a second airline, coordination of special events, an industry task force to drive a “whole of government” approach to its issues and a minister “who can devote significant time and energy” to these tasks: it’s all on a wish list that has been presented to the new government by Tourism Central Australia (TCA).
The group last week also met with Minister Matt Colan and new Tourism NT supremo Tony Mayell who returned to the Northern Territory after 15 months as head of Tourism Tasmania.
“Having close access to key tourism staff within Government will bring benefits to the Central Australian industry, including more collaboration and a closer ear for our voice to be heard”, says TCA’s Acting General Manager Laurelle Halford (pictured with TCA chairman Jeff Huyben). She is currently acting as part-time general manager while negotiations are under way with a preferred applicant for the position.
TCA’s manifesto has the support and input from Tourism Top End, NT Chamber of Commerce, Alice Springs Town Council, Darwin City Council, the Tourism and Transport Forum and the Australian Tourism Export Council.
The wish list “will continue to grow as TCA finalises its strategic plan” says Ms Halford. “Tourism NT has not yet released its own revised strategic direction – it is in draft form I believe – and TCA obviously takes into account the Government’s direction when deciding its own.”
She says that one of the top priorities for TCA is to continue to work with Government to see a second airline into Alice Springs: “There needs to be continued investment in the attraction of and strong lobbying for additional airlines into the Northern Territory particularly recognising the importance of a second airline into Alice Springs”. She says another focus needs to be how the industry could “better benefit from major events and conferences that come to town”.
She suggests a board or an overarching committee could bring about “improved collaboration and communication between TCA, the industry, the Convention Bureau and the government. “Key events representatives could sit on this committee, such as NT Major Events, Masters Games, NT Convention Bureau, council, and other event organisers, for example Finke and Beanie Festival. There is not enough communication at the moment to allow operators to maximise the opportunities. We would like Government to take the lead in forming such a board or committee, seeing as most of the major events, festivals and conferences are either funded or part funded by Government.”
Ms Halford says, for example, when a conference comes to town, the opportunities for tourism operators could be outlined and presented by the Convention Bureau to identify targeted experiences and packages for the delegates. At present there is a list of upcoming conferences available for operators to view on the NTCB site, but the industry could benefit from more details, such as the types of activities those delegates might like to engage in in their “down” time, when they might have their down time, or opportunities for operators to be able to offer specialised packaging to delegates for pre/post touring.
“Promotion of such packages or experiences could occur with the PCO (professional conference organiser) during conference planning as well as when the delegates arrive. Operators could be given the opportunity to offer special deals just to conference delegates and these could be promoted in the pre-conference communication to delegates.”
Ms Halford says “there is a lot more collaboration that could occur” with the Masters Games: “TCA takes it upon itself to ask for special rates from operators for participants etc, however I don’t know that there is much collaboration between all the relevant bodies to ensure this event is marketed as broadly and as best as it can be. It is widely acknowledged that interstate participant numbers were down this year, and the reasons for this need to be explored by all parties.”
The manifesto calls for a public sector investment to at least 08/09 levels “and for that investment to increase at a minimum rate of CPI on an annual basis. In doing this the incumbent government recognises the significant contribution that tourism makes to the economy, employment and well-being of the Northern Territory.”

There should be an “increased public sector investment for targeted domestic and offshore promotions – strategically, recognising the significant change in marketing channels across the tourism sector, but not forgetting traditional marketing channels and in fact some renewed energy and investment [should go] into these traditional channels”.
The wish list calls for increased public sector investment into “targeted infrastructure spending, in particular the sealing of the Red Centre Way, expansion of the Alice Springs Convention Centre, infrastructure development into national parks, recognising their significance in both sustainability and as an attractor in their own right”.
The new NT government should “invest in and gain funding for training and work skills initiatives across the tourism sector … and secure additional funding from Federal government to ensure the Territory’s tourism businesses have the people and skills they need to ensure the delivery of compelling high quality visitor experiences and services, including increased digital capacity for operators and customer service training.”

PHOTO: Postcard produced by Councillor Eli Melky in his campaign for a second airline.