A remote Australian century 'at a glance' 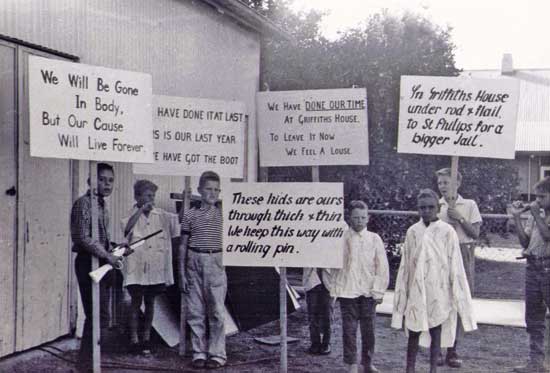 With one photograph or more on almost every one of its 250 plus pages, At The Very Heart – 100 Years in Remote Australia is a book to dip into for the stories or themes that catch your eye. Mine searched for the Alice Springs context and delighted in this band (above) of assertive children. They don’t seem to be very happy with the prospect of moving to St Philip’s boarding facility! They say they’re “getting the boot” and while they might have been under “rod and flail” at Griffiths House (named for its founder Rev Harry Griffiths and his wife Dorothy), St Philip’s  will be “a bigger jail”. 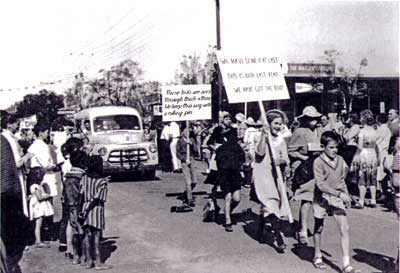 They had prepared their banners for the annual Bangtail Muster Parade and another photo (at left) shows them marching, with girls joining in. It’s interesting to see two Aboriginal boys among the Griffiths House students. The year must be 1965, the year St Philip’s opened, so some of our readers will probably recognise themselves or friends in these photos.

The book celebrates the centenary of  Frontier Services, the organisation which grew out of John Flynn’s Australian Inland Mission founded in 1912 to famously provide “a mantle of safety” in the Outback. (The AIM later united with the Methodist Inland Mission to which Rev Griffiths belonged.) Organised around the broad themes of Flynn’s project and, in keeping with its focus on the photographic record, it offers ‘snapshots’ of information about that work rather than a narrative. 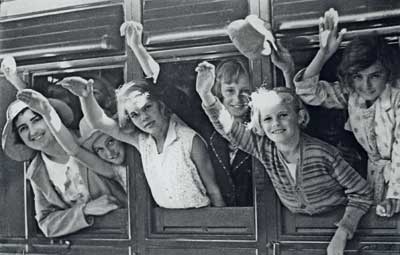 With this approach you sometimes don’t quite know when and where you are. On occasion this might be down to detail being lost to the tide of history but it is possible that the detail has simply not been included. I wonder which it was with a marvelous photo (at right) captioned “Outback children returning from an early AIM children’s camp at Warrawee in Adelaide.” There’s no information about where they are from, nor the year, let alone names but are any or all of these details available in the AIM Collection held in the National Library of Australia?

The text tells us about seaside holiday camps at Warrawee, organised for bush children. The first was held in 1933, a permanent building opened in 1950 and later it was used as a children’s hospital, until it closed its doors in 1974. On the opposite page it quotes from the diary of Sister Ruth Radburn and overleaf, a page of the AIM Frontier News is reproduced, with an article by Frances McKechnie (a familiar name in Alice). Again with these documents there’s no date, yet surely it would have been possible to establish a date for both.

This approach gives the text a slack feel and I soon found I was only scanning it. Luckily the photographs are sufficiently rewarding, conveying a sense of the vastness of the country and its inherent challenges to which Flynn and all who worked in his spirit responded so well. 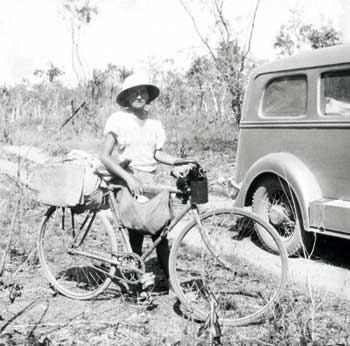 “Unjudgemental friendship” was one of the qualities defining their work and this is reflected in the photographs, where people are respectfully shown as they present themselves. I like the unsmiling determination on the face of an unidentified woman (at left) in the 1930s, who was attempting to circle Australia on her bicycle. The photo was taken somewhere in the Northern Territory by a patrolling padre and while we’re not told, you can imagine him offering assistance and her firmly declining. And on the other hand, you can scarcely imagine undertaking such a journey with so few supplies! I’d love to know if she made it.

Some photos come into their own for their documentary value. The book reproduces quite a number of photos from the album of Ellen Small, one of the earliest nurses in Alice Springs.  None is a great photo but together they give a good impression of the gumption and optimism of Sister Small and her fellow nurse Ina Pope, their arduous journey to get here, the basic living conditions (below) once they arrived and their apparent enjoyment of the whole adventure.

I’ve focussed on a small selection of the historic photos and there are plenty more, as well as lots of more recent and contemporary photos in a wide variety of circumstances, testifying to the ongoing vitality of Frontier Services as an organisation. There’s also a unifying atmosphere of warmth and good cheer across the decades, reflecting no doubt the rewards of delivering practical help and human understanding. 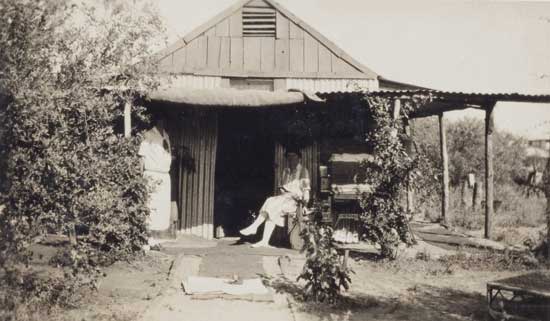 • Photos of  the Griffiths House students are from the Ben and Lily Usher Collection (they were the last managers of Griffiths House).
• Photos of the children on the train from Warrawee  and the woman with her bicycle are from the AIM Collection, held at the National Library of Australia.
• The photo of Ellen Small’s first home in Alice, dubbed “The Shack”, is from her photo album, made available to the author by Bernie Hoffman.