LETTER: Should we dam the Todd? 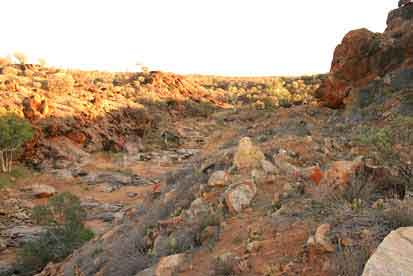 Sir – I would like to contribute to the issue of damming the Todd River. Something has to be done about flood mitigation. Burying your head in the sand will not make it go away. We live in a climate of extremes and some of our older residents will remember the terrible Easter flood in 1988 with massive property damage.
Most of your readers expressed the opinion that there seems little interest in having a recreational lake north of Alice Springs. With our evaporation rate ten times greater than our rainfall it makes sense not to create a permanent lake. Most of the rivers in Central Australia are known as dry rivers.
What I would like readers to consider is the construction of a flood levy on the Todd River north of Alice Springs at a place know as Atnyere Arrkelthe (Junction Waterhole pictured).
In January 1990 the Aboriginal Areas Protection Authority (AAPA) issued a work certificate to build this levy but it was withdrawn when construction plans were amended to make this a permanent lake. I believe AAPA would reconsider the idea of a levy at this location.
Let’s get serious about flood mitigation. I live on South Terrace and according to Council flood plans my property will be affected every 20 years. Let’s have this levy and not a dam. That makes sense.
Ted Skahill
Alice Springs