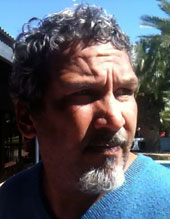 The board of Lhere Artepe today announced the appointment of Michael Liddle Jnr (pictured) as chairman. This follows the stepping down of Ian Macadam who has told the corporation that he is planning to focus his efforts on the development of young Aboriginal people through sport and personal development, according to a media release of the board.
Mr Macadam runs the Clontarf organisation in Alice Springs.
The release quotes Mr Liddle, who is also the deputy chairman of the Central Land Council, as saying: “The board has been working hard over the past 10 months to address a number of governance issues and encouraging Arrente elders to participate a stronger interest in the management and development of the Corporation.
“We must not forget that many of the native title holders including myself are concerned about the credibility and the name of Lhere Artepe Aboriginal Corporation which we believe has been destroyed by the previous management and the inappropriate and disrespectful administrative actions that happened in this office.
“It is also important for everyone to understand that the position of chair will become vacant at the next AGM and the new board will vote on those who nominate as the chair.
“Ian Macadam has played a significant part in a rebuilding process and I thank him on behalf of the board as one the members of the Antulye estate group.”
The release says the corporation has obtained the services of Ron Morony for a short period “to help with strengthening the governance of the corporation and to prepare for the next round of annual general meetings for the Lhere Artepe Aboriginal Corporation and the three native title estate groups, which it represents.
“This will occur in mid to late November this year. The Mparntwe, Irlpme and Antulye estate groups each nominate members to make up the board that governs the corporation.”
Mr Liddle says in the release: “We [must] pay respect to our elders and our leaders. We are working hard at the rebuilding of confidence in this structure, which many of our past elders fought hard for.
“We know many people want to work and engage with us on native title issues but our primary focus in recent times has been to rebuild the reputation of the corporation and its capacity to represent the interests of the Central Arrernte native title holders.
“There are still a number of serious issues which need to be addressed and we are paying extra attention to involve our elders to assist us with the direction of Lhere Atepe and Aboriginal people in Central Australia.
“We have been saying for some time that we will no longer accept these imposed solutions but we stand ready to work with Government if they are prepared to work with us as equal partners and in the spirit of mutual respect.
“We are involving other local Aboriginal organizations and really do need them to support us as the native title representative body [of] Central Arrente people but we also know that we have to work even harder to get the credibility respect back into the corporation.”