Home Issue 39 Why don't we do political satire in Alice?
Issue 39Issue 40Volume 19

Why don't we do political satire in Alice? 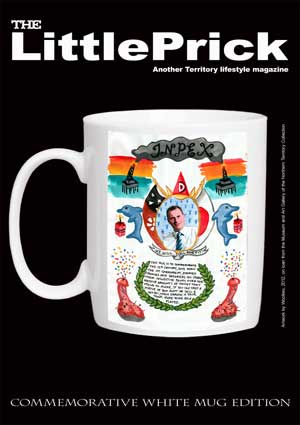 My first reaction to The Little Prick was: why don’t we do political satire in Alice Springs? It’s a show of mock-up magazine covers, created in reaction to “lifestyle magazines” – ResideNT and the like (apparently there have been a number). The title refers to a statement by former NT Attorney-General Rob Knight, describing flag burners as “little pricks” and suggesting they should be gaoled, says the artist who brought it all together,  Therese Ritchie. Like all the other  contributing artists she is from Darwin.

The show is funny and provocative, quite crass at times,  and what seems significant – in thinking about the difference between Darwin and Alice – is that it targets ‘big ticket items’. These include our political leaders. Of 24 images, Paul Henderson features in four (the work was created pre-election). I don’t think I’ve ever seen a satiric image of ‘Hendo’ in Alice. Terry Mills joins him for one, a spoof on the movie poster, Dumb and Dumber. Dave Tollner, in a cloud of cigarette smoke, is characterised as a Pestilence.

The Barack Obama visit to Darwin, enthusiastically supported by Julia Gillard, and the related military build-up in the north attracts the barbed attention of three works and the whole show has a spoof catalogue essay by Obama. Inpex and the hype around the oil and gas boom and endless economic growth draws fire in three or four cases. This whole scenario has been almost immune from critique (my effort was this myth-busting interview with economist Professor Rolf Gerritsen) let alone satire in Alice. Other sacred cows that are taken on include Territory Day’s fireworks, tourism as a necessary good, Kenny Rogers, alcohol, nationalism; and institutions that are derided – the NT News, CDU, the arts bureaucracy. 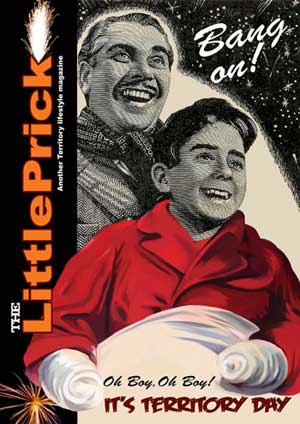 In Alice the closest thing to this kind of lampooning in recent years was the show Souvenir, presented at Watch This Space during the 2011 Alice Desert Festival. There’s an interesting difference. Mindsets were the target – those very close to home (“Bleeding Heart Central” as it was called) as well as political correctness of many shades, and popular culture. But mainstream politics – its figures and events – were entirely absent. Even the Intervention was spared (it figures in a couple of The Little Prick exhibits).

Is it just that mainstream politics – in the sense of personalities, relationships, controversies – happen too far away while local politics on the other hand are too uncomfortably close (you never know when you might have to shake the Mayor’s hand or ask council to do something)? Are our lives relatively unaffected, for better or worse, by the economic and political shifts of the capitals and so our attention is always turned more inwards, towards ourselves? Or are we too serious, or else too careful, too timid, too cowed?

Top: Chayni Henry takes on a Territory Labor sacred cow with INPEX: We will all benefit.

At right: Therese Ritchie dares to question the wisdom of Territory Day lifestyle with Bang on! 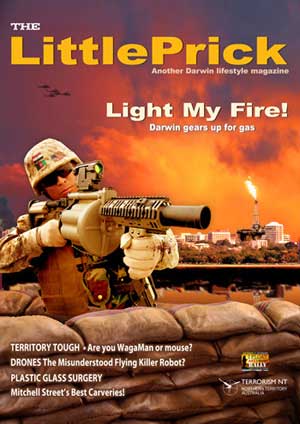 At left: T.S. Williams makes the connection between the resource boom and the military build-up in the north with Light my fire.

By ERWIN CHLANDA There is significant additional money in the Budget for roads across the NT but “nothing I can specifically identify for Central Australia,”...
Read more
Issue 40

Reviving the legacy of Albert Namatjira

This report has been censored by the NT Government

By ERWIN CHLANDA We had published here a report following an interview with Senior Fire Management Officer Lee Gleeson, on a matter of the highest...
Read more