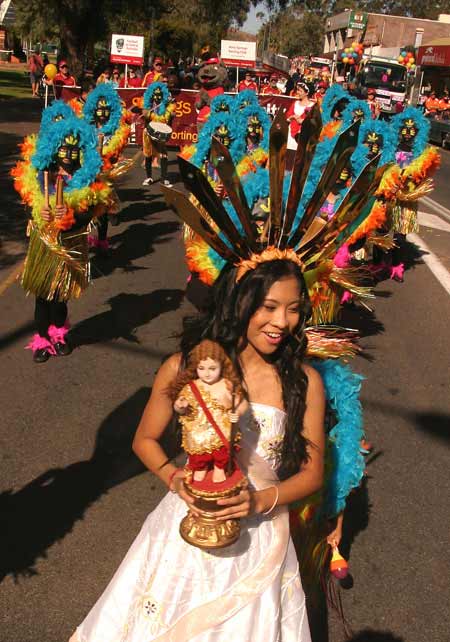 Story and video by ERWIN CHLANDA

Alice Springs folk turned out in their thousands, as participants and spectators, for the annual Bangtail Muster this morning, as though to show the world that the community in the heart of Australia is alive and well.
The town once again has had devastating world wide publicity after the alleged rape of two overseas tourists, and a string of other brutal crimes.
But on this May Day holiday, blessed by the town’s trademark magnificent weather, young and old turned out to celebrate the achievements of Alice Springs – its great sporting clubs, child care, schools, music and above all, community spirit.
There was also a sprinkle of trade union members to mark Labour Day.

“Our Community” was the theme picked for this year by the organisers, the Rotary Club of Alice Springs. 40 floats were entered.
The Muster is their annual fundraiser for the local Youth Centre and is one of the Centre’s major events.
The story behind the Muster goes back to the old days when cattle production was the main industry of the Centre and stockmen would cut off the ends of the tails to record the number of cattle mustered.
Pictured is Celine Ociones, 17, carrying a statue of Santo Nino, the holy child, Little Jesus.
She leads 21 dancers and musicians from the Mabuhay Multicultiral Association which has about 60 local families as its members.
The Rotary Club of Alice Springs this year ran the Bangtail Muster parade at a loss, probably the first time in its 50 year history, because of NT Government requirements for a traffic management plan and licensed staff to implement it.
It cost Rotary $4000 for an hour and a half’s work yesterday, done by a dozen people “holding up lollypop sticks saying ‘No Entry’,” says Rotary president Eli Melky.
The quoted cost was $8000 but Rotary provided eight volunteers to help licenced staff and shortened the route of the parade, reducing the number of intersections needing to be closed.
In 2011 Alice Traffic Management donated their time.
Mr Melky says that was greatly appreciated but it can’t be expected that companies who are not volunteers keep donating their services.
He says the new traffic management requirement could scuttle the Muster which has, over the past half century, developed into a highly popular community event and is an attraction for tourists.
He says no doubt the other two parades, Henley on Todd and the Alice Desert Festival, will be similarly affected.
Volunteers could do the job and the estimated $20,000 syphoned from the three charity events each year could be used for good causes.
Mr Melky says it seems members of community organisations, run by volunteers, will now have to spend time taking traffic management courses, pay fees for them, and obtain licences which have a limited period of validity, after which the courses will need to be done again.
The Alice Springs News Online asked Transport Minister Gerry McCarthy and Minister for Central Australia Karl Hampton for a comment.

Facebook
Twitter
Pinterest
WhatsApp
Previous articleAlice Prize: unpackers pick their winner
Next articleSEXUAL ASSAULT CASE, FURTHER UPDATE: Youth in court should not have been in Alice Springs at time of alleged offending.