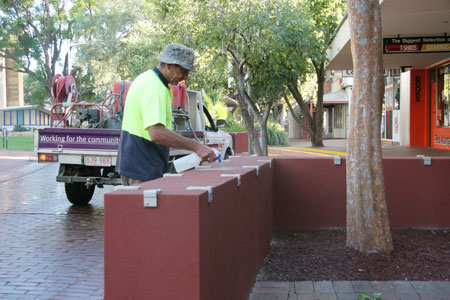 Over the last few weeks I’ve been amused watching the disabled access steps and walls go up in Todd Mall. I’m not sure how the construction of steps is aiding better disabled access but the Mayor and Co seemed to be very pleased with it all at the launch a few weeks back.
Since, I have noted the unimaginative use of a dull ochre colour to paint the walls, rendering them to almost camouflage, along with the general lack of imagination and the bricks that make up Todd Mall.
People have been placing bets as to when the first tag or graffiti might appear on the walls but I am yet to arrive to work and find any interesting public art or belligerent tagging. I know personal taste divides what is art and what is eyesore. But that’s another spray can of words.
Anyway, yesterday morning a council fellow was busy measuring and pondering and placing little metal brackets along the wall. My first thought? That council was going to erect something similar to those pigeon deterrents for the people that have taken to drinking their coffee on the wall. Or maybe planter boxes – also a sly people-sitting deterrent – but no. What we have are skater stoppers! By late afternoon the dozen or so fittings had been fitted and the job was done. Skaters are now officially stopped.
That may have been a little bit of over kill. I mean do we really see that many people hanging out in Todd Mall?
I have a personal grudge against the relatively new on the spot fine of $137 for riding your bike etc. in Todd Mall. After some time of playing infringement notice roulette with the rangers I have since taken to using the riverside bike path. Which is a good bike path, I’ve got no beef against that track. But it’s a course that is not lined with shops and struggling businesses that could have otherwise lured me in at the end of the day particularly if I’ve got my pay burning a hole in my pocket.
Shame for them and shame for me too, I often remember too late that I was meant to stop in for a coffee and say hi to an old colleague. Friends for an impromptu drink may have hailed me down as I was passing by. Or that I was going to have a browse in the book stores. Anyway.
I was chatting with some folk at the market on Sunday where I remarked on the drastic difference from the previous Sunday. With nothing on in town there simply isn’t much reason for people to come into Todd Mall. Though the pull of the actual market stalls for locals is limited it’s the liveliness of the event that draws people in to watch each other, have a coffee and a chat.
And let’s not get started on the mall at night. With hardly any lighting and nothing going on until later on in the year when the touristy night markets start up, you can just stay home.
Todd Mall is equipped with stages, speakers, grassed areas, sails for shade and a pretty amazing climate in a town full of poets, performers, musicians, travellers and artists.  There is a hugely creative and vibrant arts community in Alice Springs. Maybe what’s missing from the equation is imagination on the business end of town.
A few days out from the council elections I am sure that I am not the only one with bated breath and fingers crossed hoping for inspired and imaginative forces to start operating within council. I would love to see the potential of Todd Mall capitalized on to create a vibrant centre for the town.

PS: After I write this on Tuesday I saw two people trip and fall on the disabled access steps and on the same morning, Wednesday, a council fellow cleaned off the first tag on the wall.

More ways than one to make good compost

By GEOFF MIERS Well composted home-made organic matter is rich in nutrients, makes for great soil conditioner, can be used as a mulch and when...
Read more
Issue 52