An end to conservative blocks in Town Council?

Voters going to the polls for the local government elections tomorrow will not notice any changes as they cast their votes; they will still be required to put a number in every square for each candidate on the voting slips.
The major change comes in the method of counting the votes, which will be counted and preferences distributed via a proportional voting system (Alice News Online, March 4).
The new system replaces the notorious exhaustive preferential counting method, long suspected as a form of “block voting” that facilitated the dominance of politically conservative and business oriented aldermen (now councillors) onto the Alice Springs Town Council. (For an explanation of the old system, see Alice News, March 27, 2008).
The exhaustive preferential system is not, however, the original method of casting and counting votes for the ASTC. As you make your choice for mayor and councillors on March 24, spare a thought for your compatriots in Queensland choosing their next state government, because they’re using an optional voting method which was also the system in use during the 1970s for the Alice town council.
This method permits voters to put numbers in squares only for the candidates they favour and can ignore the rest – in Queensland a voter may choose simply to vote for one candidate, regardless of how many are running in that electorate.
For the council elections of 1971, 1974 and 1977, voters were required to place numbers equivalent to the number of positions on the council, plus one more, for the election of the aldermen. The extra vote was required in the event an aldermanic candidate was elected as mayor (the vote for mayor is always determined first).
As there is always only one position for mayor, the counting of votes has always been a simple distribution of preferences until one candidate achieves an absolute majority (50 per cent plus one).
In 1971 that wasn’t necessary, as Jock Nelson (no relation) garnered 75 per cent of the votes; still the record to this day. He was formerly the Federal Labor member for the NT. 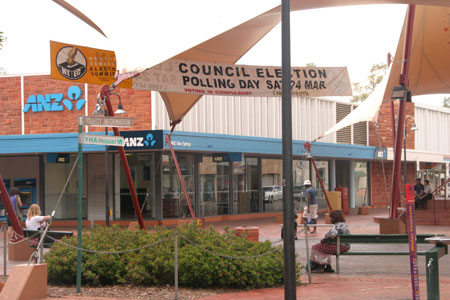