Getting serious about eating local 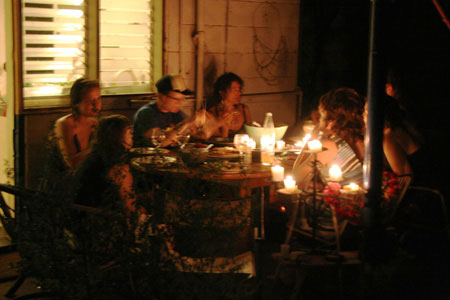 Last week was One Planet Week, a week in which to challenge our habitual resource use and to live in line with the resources of one planet. In Australia the majority of us consume at the rate of three to four planets … meaning we need to find that many more resources if we want to keep up our current lifestyles. For One Planet Week a partner and I set ourselves the challenge of eating locally for the week, not driving and using as little electricity as possible. This included no air con and in the heat that I’m sure you all remember of last week, this was no small feat. Not switching the air con on at work resulted in an entirely different approach where the day started earlier; lunch was later and longer with a few hours back at the office in the cool of the afternoon. I am all for the type of lifestyle that accommodates the siesta.
I thought I would do a daily journal of our locally sourced culinary adventures. Day one started well enough with mint-from-the-garden tea and eggs on Kankun but after day three of every kind of variation of these ingredients it was getting rather repetitive.
I think that my planet partner was getting quite hungry as she floated the idea of killing one of the house chooks (she is usually vegetarian). And to be honest I was in favour of the chook killing not because of hunger pangs but because I think it had gone mad from the heat. Since that conversation though the chicken pulled itself together and is behaving fairly regularly (I think it overheard us) and also in its favour were a couple of delicious dinner parties to attend.
Now I should probably state that I was not as committed to this challenge as my friend. I pretty quickly decided that discounted food in the specials bin was fair game as too was stuff going limp in the fridge or gathering dust in the cupboard.
Dinner on day three was going to be OK: I pulled out a dusty jar of laksa paste combined with the limp vegies from last week’s veggie box. Oh, if only we had remembered to get an order in for this week! You actually need to be quite prepared and organized for this sort of challenge, which is ironic as it is all in an effort to reduce and simplify consumption.
Have you tried your locally bow-hunted camel jerky yet? 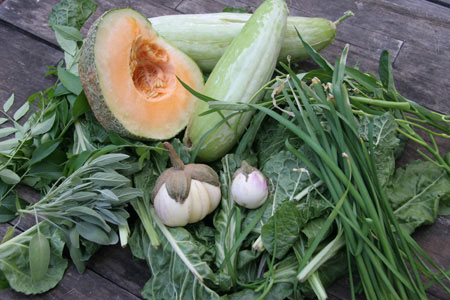 Anyway it wasn’t looking good. A desperate call was put out over Facebook looking for any spare locally grown produce. The response was pretty impressive: locally bow-hunted camel jerky, heirloom eggplants, spinach, grapes, heaps of basil (I’ve made jars and jars of pesto), bush cucumbers and sweet potato leaves, rock melon, cucumber, sage, lemon grass and garlic chives.
I guess the point of One Planet Week was about raising awareness around resource use and it certainly brought us closer to the reality of food security in Alice Springs. My partner in chicken culling thoughts told me that she really got a sense of how “supermarket culture and living across the road from the East Side shops where having imported wine, Dutch butter and organic haloumi at your fingertips at pretty much any time of day gives a distorted perspective of the world.” For me eating locally and steering clear of shops just made for a really different living experience.
The grand finale of the week was a local produce dinner party. Friends came with all sorts of tasty things, fig pumpkin and polenta pie, roasted veggie salad, spinach and beetroot super salad and pesto pizza. I know the flour and polenta weren’t local! That just served to further highlight my already heightened sense of insecurity in Alice Springs when it comes to food. Anyway dinner was great, lubricated with dumpstered-apple cider and a local food home restaurant was born in the course of discussions. We lit candles instead of switching on the lights and wondered at the embodied energy used in the manufacturing process of candles … Either way I think that the failings met during the week were offset by the permaculture blitz at a friend’s property that has created a great big 50 square meter veggie plot!