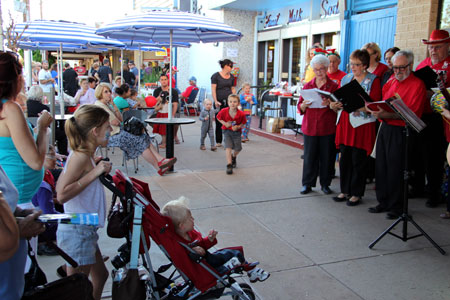 South Broken Hill and Alice Springs have a lot in common so far as their problems are concerned.
They couldn’t be more different in their quest for solutions.
Empty shops, people leaving town, public facilities needing a facelift, the outback magic failing to lure the tourists in numbers aspired to.
The reflex to this in The Alice is for a hundred or so people to go to a public meeting. They complain about the town council or the government not doing their jobs. They clamor for more public money or services, come up with a great many ideas about which they do very little.
There are a few new enterprising businesses people but these are solo efforts, not part of a community push.
At best the council or the government may allocate some funding, engage a consultant, get a report and shelve it.
It seems The Alice could take a leaf out of South Broken Hill’s book.
The poor cousin of the iconic mining town., South Broken Hill is separated from the main part of the city by a hill. As if out of sight, out of mind, the symptoms of decline set in two decades ago: shops in the main street closed. Some were turned into dwellings, some just stayed empty. Of 21 shops only 16 are occupied.

The push is on to get tenants, and some short-time occupancies have been offered to artists and exhibitions.
When the city lost more than one third of its former population of 35,000, the effects were felt most sharply in Broken Hill South.
You can buy a shop – the real estate – for under $100,000 in Patton Street.
The average in Argent Street, the main drag in North Broken Hill, is around $200,000.
Jason King (pictured) says two-bedroom homes go for $50,000, a “nice house” for $200,000 and $300,000 will buy a “very nice” home with a pool.
Now even Coles is abandoning South Broken Hill.
Mr King says the mines are producing more now than ever before but they can do so with far fewer miners: “They don’t need 8000 blokes to go down and do it like they did before,” he says.
Mr King owns Bell’s Milk Bar and Museum in Patton Street. He bought it eight years ago after it had been on the market for three years.
It’s one of the born-again businesses in the main street of what’s now called Patton Village, the ongoing creation of an extraordinary, never-say-die community effort.
Mr King, as one of the leading lights, is spreading the message around the nation, especially through the Desert Knowledge Australia Outback Business Network.

Mr King says the town council is doing its job, looking after a park, refurbishing the rotunda in it, getting more seats, managing the pool and the library which has a pre-school attached.
A local councillor was elected on the back of promises to represent South Broken Hill.
The council and the state government are regarded as stakeholders, “but we have to drive the changes,” says Mr King.
To bring Patton Village back to life, its people would have to do it. No-one else would.  A group, Patton Village Community and Business Association, was incorporated in 2010.
The dynamics developing within the group are unusual. It’s based on the conviction of the locals that Patton Village is a nice place.
“It’s laid-back, relaxing. When you go there you feel like you’re part of the community, compared to a shopping centre,” says Mr King.
“Tourist villages are a very popular model right around the world.
“ The group’s objective is “keeping what the town already has.
“We don’t want a poor man’s version of a main street nor our park to be a smaller version of the premier park in the town.
“ Decision making is bottom up rather than top down, getting people together, consulting with … I hate that word, actually,” says Mr Hill.
No consultant was employed.
Funding?
The group received the princely sum of $6500, part of which is still in the bank, from the Broken Hill Community Foundation, a capital fund set up by the mines.
It contributes to small start-up businesses an 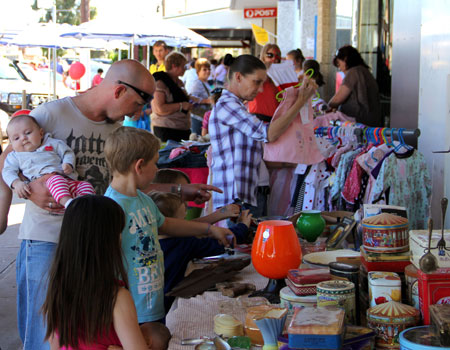 d micro-funding of innovative projects, says Mr King.  Money plays a surprisingly minor role: rich or poor, the knack is to mobilise all assets that are available – no matter how big or small, he says.
“We don’t rely on anyone’s effort. We achieve what we can with what we’ve got. People are encouraged to contribute.
“ Sometimes only two of the 12 committee members turn up to a meeting. But these two will leave the meeting with a project, a task, a job and they will go and do it.
Given that, patience is a virtue that can be indulged in with confidence: “A dozen empty shops isn’t going to be fixed in a week,” says Mr King, but in time it will.
The group may pay for materials and then volunteers take over.
“Many have never been in a project like this before and they are getting right into it. Sometimes it’s hard to stop them,” says Mr King.
“Hey, we’ve got enough signs now. We don’t need any more!”
Apart from sign-painting other projects so far have been production of a postcard promoting Patton Village, producing radio commercials, a website and a Facebook site.
The group is big on community gatherings, has run film nights in the park and is planning a two months movie festival, screening every Friday.

In The Alice funding, usually from the public purse, is a preoccupation  when anything needs to be done. By contrast the SOS group will apply for grants, but so far, this is high finance, Patton Village style.
They held a fete and 16 businesses contributed $2000 worth of prizes.
The one doing the best trade – the pharmacy (“they do OK”) – kicked in a $500 cash prize.
“It was converted into Patton Village dollars which had to be spent in the street,” says Mr King.
“You had to be there on the day to win it, so we had a lot of people coming.
“ It turned out to be a great day: the school choir performed,  the 16 businesses were open, three or four community organisations took part and there were 15 to 20 market stalls.
“For our little precinct it was a lot.”