Perhaps because this can be a hot place anyway, there was little heat in the Alice Springs conversation with the Climate Commission; and perhaps because it’s an expensive place to live anyway, there was no whinging about the “great big tax”. The science was clearly accepted; people’s interest was in ‘where to from here’.
Were the commissioners worried, then, that they were preaching to the converted? This was put to them from the floor, with the speaker expressing concern over the polarisation of the debate in Australia.
Gerry Hueston, recently retired President of BP Australasia, representing a business perspective on the commission, pointed out that both major parties accept the science and both are committed to reducing emissions by 5% of the 2000 level by the year 2020. The debate is in how to go about it.
We’ll never get “perfect policy” coming out of the democratic process, said Mr Hueston, but we can get policy moving in the right direction. At the moment, short-term political issues are getting in the way but that will shift. In the USA, despite division at the national level, a lot of individual states will soon be more progressed in their climate change adaptations than Australia is, he said.
Commissioner Dr Susannah Eliott, an expert in science communication, said it was important not to be too focussed on the media’s tendency to highlight difference (rather than convergence). She wasn’t worried if the audience was “converted”, as they would all be “communicators” and providing them with good information would lead to more conversations in the community, based on better knowledge.
There was some concern about the impact of the Clean Energy Act, passed this week, on the poorest people in the region. Mr Hueston explained that the legislation has taken this into account through the tax system, raising the tax threshold and decreasing taxes at the lower end. This measure should more than compensate for rises in electricity costs, he said.
The perception that people in remote communities needing to travel to town for services will be hit by rising fuel costs was corrected by Chief Commissioner and former Australian of the Year, Professor Tim Flannery: the tax is on the big polluting companies; fuel for personal vehicles is exempt. Fuel prices may go up but that will have nothing to do with putting a price on carbon, he said.
Disproportionate impact on remote communities
Professor Lesley Hughes, a biological scientist who has contributed to the UN’s Intergovernmental Panel on Climate Change (IPCC), said that it is acknowledged that climate change will impact disproportionately on the most vulnerable, among them people in remote communities, and that the commission will be releasing a report highlighting this situation – though not necessarily providing answers. 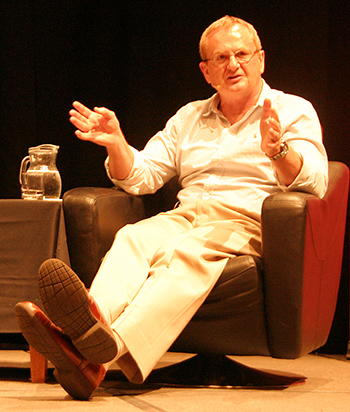 Pictured: Top – Professors Tim Flannery and Lesley Hughes at the ‘Climate Conversation’ in Alice Springs on Wednesday. Above right – Gerry Hueston, formerly President of BP Australasia. Above – part of the crowd, some 300-strong, taking part.