Only firefighters decide on how to deal with individual fires

Have firefighters watched some trees in the Todd burn? “Yes,” says Senior Station Fire Officer in Alice Springs, John Kleeman, but only when any further effort to fight the fire would be “to no avail”.
Have firefighters’ decisions on how to respond to individual fires had anything to do with agreements or instructions from the Aboriginal Areas Protection Authority (AAPA)?
“No,” says Mr Kleeman and “No,” says AAPA.
The Alice Springs News Online has spoken to Mr Kleeman and Dr Ben Scambary, the CEO of AAPA in order to clarify a heated debate that has developed in response to our report of November 7, ‘Spot a tree? Chop it down!’.
Mr Kleeman condemns as an “absolute crime” and “a blight on the environment” the deliberate burning of trees in and along the river. He says the fire service responds to all reports of fires and either puts them out or renders them harmless. He is aware that many trees in the river are sacred but he is “not privy” to which ones are and which ones are not.
“We treat them all the same,” he says, but “unfortunately” many of the very old gums are riddled with white ant and hollowed out and once fire gets well established in the base it’s extremely difficult to extinguish.
“We have tried blocking them off and filling them up with water but it’s been to no avail.
“We have 3000 litres in our tankers and I’ve sent crews back again and again, but once that chimneying effect has started, it’s all but impossible to put out. ”
While firefighters have given up on some trees, he says they have also saved many: “I assure you we do the best we can with the resources we’ve got.” 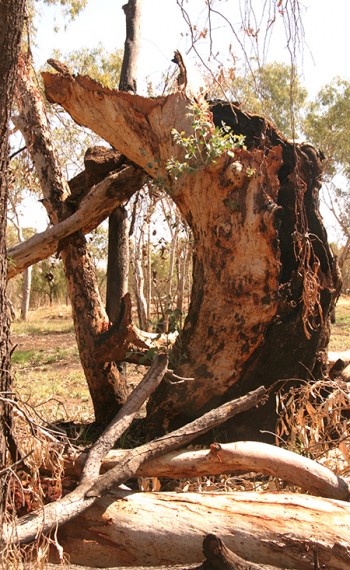 He says the fire service notifies the Town Council if a burning tree or “carcass” presents a danger to the public. It’s then council’s responsibility to remove the danger. He recognises that the carcasses could become significant hazards if they are picked up and carried in a future flood, and also that it looks “shocking” to see “all those magnificent gums lying on their side – a real tragedy”.
Dr Scambary, in a written statement, says that AAPA has a “good working relationship” with both the fire service and the Town Council.
“The AAPA has never issued an instruction not to respond to fires or other emergency circumstances due to sacred site protection matters.  On the contrary, the protection and survival of sacred sites and sacred trees is of great importance to Aboriginal custodians and the AAPA.
“The AAPA will continue to work with both the Town Council and the Fire and Rescue Service to support coordinated and planned action for community safety and the protection of sacred sites.”
On the matters of fire prevention and the removal of dead trees, he says:
“The AAPA has issued Authority Certificates to the Town Council for fire abatement management works in the Charles and Todd Rivers; and for emergency and public safety works within the town.”
The certificate for the rivers, issued following coordinated discussions with council and the fire service, and in consultation with Aboriginal custodians, allows for “managed reduction of the potential fuel load” and the “creation and maintenance of suitable fire control lines”.
“These works can include the removal of dead limbs and other matter close to trees.”
The certificate for the town allows for “trees to be felled, and removal of hazardous materials or substantially dangerous debris in circumstances where these trees pose an immediate threat to public safety”.
Says Dr Scambary: “Custodians of sacred sites in Alice Springs support the prevention of uncontrolled and deliberately lit fires in the Todd and Charles Rivers as many trees (and other features) in these areas are sacred sites.
“Custodians have expressed distress about the loss of sacred trees and have consistently called for action to prevent damage to sacred sites.  Custodians also take seriously the need to make areas safe in emergency circumstances.”
Pictured: Top – A severely damaged old tree in the Todd River, alongside Tuncks Causeway. Above right – The same tree: new growth can be seen spouting from the seemingly devastated trunk.