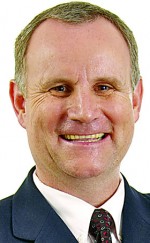 The announcement that major beverage producers are seeking to overturn the Territory’s Container Deposit Legislation should come as no surprise to a Labor Government that was warned its laws were deficient without support at the national level, says Shadow Attorney General, John Elferink (pictured).
Meanwhile Environment Minister Karl Hampton today called on the beverage industry to accept the wishes of Territorians and drop their attempts to overturn the Territory’s new Cash for Containers Scheme.
Mr Elferink says he raised these issues in February:-
• The government has acknowledged it does not have the required acquiescence of the other jurisdictions under the operation of the Mutual Recognition Act 1992.
• As a consequence the Northern Territory will, in all likelihood, find itself having to fight the legitimacy of this legislation in a court.
• If this government fails to achieve its objective of winning this matter either in COAG or in a court then the government will have made a calamitous mistake in the eyes of Territorians who generally support the CDL scheme. “The Territory Labor Government has backed itself into this corner with its rushed legislation and it is Territory consumers and the community who will be worse off because of it,” says Mr Elferink.
Mr Hampton says Territorians want cash for their containers – not a legal challenge that will do nothing to clean up our environment.
“The scheme has been in place in South Australia for decades and it works.
“I am extremely disappointed to hear of industry’s plan to drag Cash for Containers through the courts to try and stop our scheme from going ahead.”
Mr Hampton called on CLP Opposition leader Terry Mills to support Territorians and join the Government in condemning the actions of the industry.
“I am extremely disappointed that Shadow Attorney-General John Elferink has backed Coca-Cola Amatil in seeking to overturn the views of Territorians,” Mr Hampton said.
“But I am not surprised.  The CLP have been looking for any opportunity to walk away from Cash for Containers.”
The Government’s preference is for the beverage industry to accept the wishes of Territorians, just like they do in South Australia, but if required the Government will meet the industry in court and stand up for Territorians.