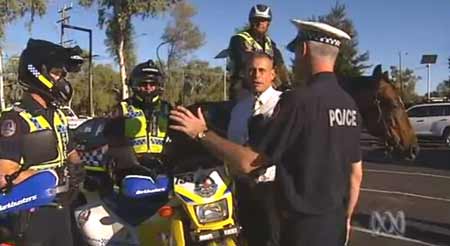 We thought the government had turned the corner with their paranoid media management when Adam Giles gave direct access to ministers, bypassing odious minders who had created a barrier worse than the Berrimah line.
Yet while the Alice Springs News Online did the hard yards on the investigation into the shortcomings of 000 calls, we got no invite yesterday when Mr Giles announced the expansion of the police call centre, amidst plods in Robocop attire, a beaming Police Commissioner and – who was that grateful Member Of The Public shaking Mr Giles by the hand? COMMENT by ERWIN CHLANDA. PHOTOS: Images from the ABC TV News last night. 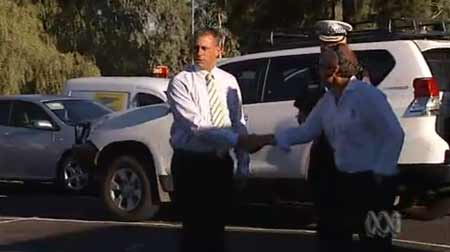 Pollies and public disconnect: is there a bigger main game?

What a choice to have on Saturday!

On the one hand we have Labor which has removed any doubt about its disdain for Alice Springs by promising to spend as much on footy TV lights – to be used maybe once or twice a year – as it would on the town centre's facelift.
And the Country Liberals are proposing to spend a corresponding amount – $2.5m – on the Youth Centre although locals say that's nowhere near enough and doesn't cover the facilities and services also badly needed. There is a lively debate about a facility costing 15 times as much.

Maybe we're asking the wrong questions: I there a bigger main game?

OK, we are those who are living "in the forgotten backyards of the capital cities, and they are not part of a national narrative which makes sense of the decisions made elsewhere which affect their lives".

But the "we" here doesn't mean Territorians, but the people inhabiting desert Australia – those of us living in the vast remote parts of all the states except Victoria and Tasmania.

Would that be the framework that could get us excited? COMMENT by ERWIN CHLANDA.