Don’t threaten us: Cattleman to PM over live export decision

Cattle industry leader Tom Stockwell (at left) challenges Scott Morrison over "threats" to appeal the Federal Court's live export decision: It should be hailed "as a principle of good governance to guide future ministers, rather than running a protection racket for the under-performers of the political class at further expense to the people".

Demand from overseas buyers creates a bonanza for cattle and pastoral land, says investment banker David Williams (pictured). He spoke with ERWIN CHLANDA at the Cattlemen's Association conference on Friday. 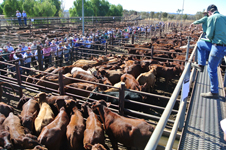 A $1b live export deal with China could be the most significant benefit to the cattle industry in The Centre in more than a decade, after nine years of drought and two years when shipping "on the hoof" was banned by the Federal Government. ERWIN CHLANDA reports.

Chief Minister Adam Giles writes about a string of initiatives by his government.