How much of our relationship with Aborigines is hypocrisy?

Seeing settlements such as Finke or Hermannsburg, not to mention Alice Springs after dark, and then listening to the hymns of how Australia looks after its First Nation people, gives one some contradictory feelings, to say at least, writes tourist Jakub Baranski, from Warsaw, Poland. He is pictured with Renata Baranska at The Rock.

Town council self censorship: ‘In confidential’ lame excuse for hiding facts from the public. 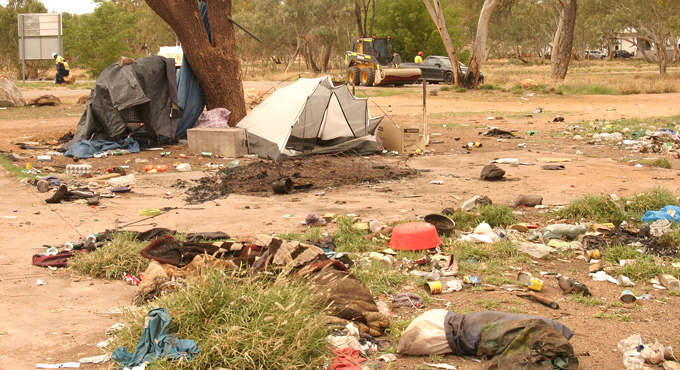 Above: This is what the center of Charles Creek camp looks like. Below: This traffic way is hardly ready for handover, unless having power poles planted in the middle of a road is the latest fad in town planning. 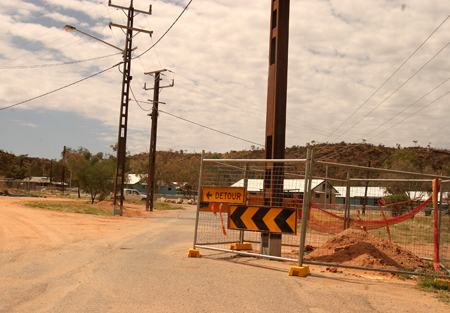 The Town Council has a nifty way to hide behind closed doors matters that should be in the public domain.
"Can't talk to you about that, mate. It's in confidential."
The latest such issue is the handover to the council of the town camps which have recently undergone a Federally funded $150m facelift.
The question is, is all the infrastructure up to scratch before it becomes the responsibility of, and a financial liability for, the rate payers?
Shadow Minister for Aboriginal Affairs Adam Giles says it's clear the roads are not, and the town camps lease holders, through Tangentyere, should be asking: "What went wrong with all that money?"

It's a question Mayor Damien Ryan, the aldermen and council staff are not allowed to discuss in public – under threat of penalties including a gaol term.
But the other half of the story is this: these elected members can at any time take matters out of confidential, which makes their assertion that their lips must remain sealed just so much hypocrisy.

Meanwhile, local identity Russell Bray is engaging in some stinging citizen journalism about power poles with this video.

Meanwhile, local identity Russell Bray is engaging in some stinging citizen journalism about power poles with this video.