LETTER: The unfinished business of the NBN

The Broadband for the Bush Alliance is calling for a greater focus on remote Australians – the very people who could benefit the most from digital communications and the NBN, overcoming distance and isolation, writes John Huigen (pictured), Chair of the alliance, and CEO of Desert Knowledge Australia, who facilitate the Alliance.

Is Fred our most faithful visitor? 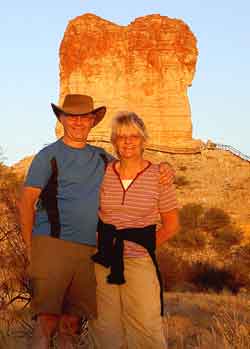 When it comes to repeat business, Viennese optometrist Alfred Pruckner must be a dream come true for the local tourist industry. Since 1995 he has toured Central Australia 16 times, every time staying for a few weeks, cruising around the bush in big hired 4WDs, taking in the well known attractions, and many not so well known. His experiences over nearly two decades make him more qualified than most to judge the region, from the standpoint of a paying tourist. ERWIN CHLANDA reports. PICTURED: Alfred and his partner, Erika, at Chambers Pillar and this week.

Convincing win for Country Liberals: ALP likely to lose its only seat in The Centre

The Country Liberals party has won a convincing victory in yesterday's Territory elections, ending an 11 year rule by Labor.

The ABC says the party is likely to have 15 seats, with nine for Labor and one in dependent.

The change was mostly in the bush – previously supporting Labor.

In the huge electorate electorate of Stuart, the CL's Bess Price (1004) is likely to unseat Karl Hampton (892) with First Nations Political Party candidate Maurie Ryan on 394 votes. Preferences will decide.

Ms Price said this morning that Mr Ryan had directed his preferences in Stuart to her, although elsewhere First Nations preferenced Labor.

She is confident to have won the seat and is overjoyed about the result: "It hasn't really hit me yet that I will be part of the team that governs the Territory.

"Today I'll be with my family, rejoicing, relaxing and preparing myself."

In Central Australia's other huge bush seat, Namatjira, the indomitable Alison Anderson was re-elected as a conservative candidate in the electorate which she had first won for the Labor Party.
By this morning's figures she had 1690 primary votes, more than double her Labor opponent's Des Rogers (740).
The CL's Robyn Lambley, Adam Giles and Matt Conlan comfortably retained the three urban seats in Alice Springs.

Voter turnout in both rural seats was poor – just over 50% on current figures, with absent, early, postal and declaration votes yet to be counted.
PHOTO: Party supporters for the CL (left in the picture), the ALP and Greens at the racecourse polling place in Alice Springs.

UPDATE 2.55pm A spectator is dead and two people are injured after an accident this morning during the car section of the race, prompting the...
Read more
ABOUT US
FOLLOW US
©