Is Fred our most faithful visitor? 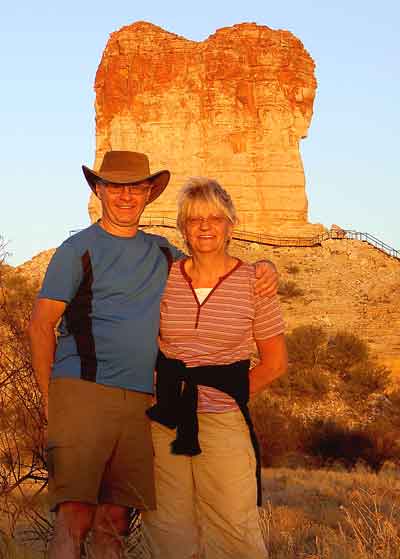 When it comes to repeat business, Viennese optometrist Alfred Pruckner must be a dream come true for the local tourist industry.
Since 1995 he has toured Central Australia 16 times, every time staying for a few weeks, cruising around the bush in big hired 4WDs, taking in the well known attractions, and many not so well known.
He camps out most nights, this time with his partner of four years, Erika Staudenbauer, sharing his rooftop tent.
She visited Ayers Rock 20 years ago but hadn’t been back to The Centre until this year.
“Here’s where I come to recharge my batteries,” we quoted Alfred in November 1998.
In 2005 Alfred and some mates walked the Larapinta Trail, end to end. His experiences over nearly two decades make him more qualified than most to judge the region, from the standpoint of a paying tourist.
He says the good news is that the magnificence of nature remains unchanged.
He doesn’t think humans are doing nearly as well: bureaucracy and regimentation are creeping into the visitor experience, and the cost of food and alcohol is well above Austria’s – itself not known as a cheap country.
He says the local tourism industry seems to be blissfully indifferent to the fact that the strong dollar is a disincentive to visiting Australia.
Glaring examples are the $18 per person camping fee at Ayers Rock Resort, notwithstanding that the shower doors don’t lock, the hooks to hang your clothes  are broken off, and the facilities are far from clean. The cheapest bottle of wine in the resort bottle shop costs $39 and you have to have a card issued by the parks service allowing you to buy it.
“It’s a gold digger’s attitude,” says Alfred.
Given that Erika and Alfred mostly do their own cooking, they shop in the supermarkets, comparing the prices with those at home. Alfred says in 2003 they were 15% lower than in Austria. This year they are 30% higher.
Car fuel is substantially cheaper than in Austria, although there are some adventurous fluctuations once you get outside Alice Springs, with one supplier between Broome and Alice charging $2.31 a litre for diesel.
Restaurant prices are extortionate compared to Austria where you can get a Menü – soup and main meal – in hundreds of good neighborhood and country pubs for around $6.50. A 500ml glass of beer is $3.60 in Austria. Here a 345ml stubby is likely to cost you $7.
Alfred isn’t a whinger – far from it – but his observations are useful for local tourism planners. He’s learned to avoid the most blatant rip-offs and makes the most of the magnificent locations around The Alice, equally enjoying walking and driving.
He says facilities in the government-run parks offer variety (no charges at all, for example, at Serpentine Gorge, or $3.30 a night for “bush camping” or $6.60 for serviced camping areas, such as the excellent one in Palm Valley).
Nature is the central attraction for Alfred and Erika, whose main hobby is doing world trips each year. His by now profound knowledge of the Central Australian region allows them to make the most of it.
They avoid organised tours but at times travel with friends in a second vehicle.
They paid $4875 to hire a Troopie with two rooftop tents (each accommodating two people) for 26 days ($187.50 a day).
They have pretty well given up on Uluru because of actual or perceived restrictions on movements and climbing. There was a sandstorm when they visited last week, and the Olgas were closed because of a fire. On balance it wasn’t worth spending the $25 a head for a three day pass, given they were planning to stay only two.
Restrictions like these are a growing concern for Alfred: “In Rainbow Valley you are now allowed to walk a few paces and then go back to your car.”
On many visits Alfred used to walk extensively around that spectacular rock formation, avoiding climbing because of the risks presented by the brittle sandstone.
“But what damage could you possibly do walking across the dry claypan there?”
Similar restrictions now apply at Gosses Bluff. 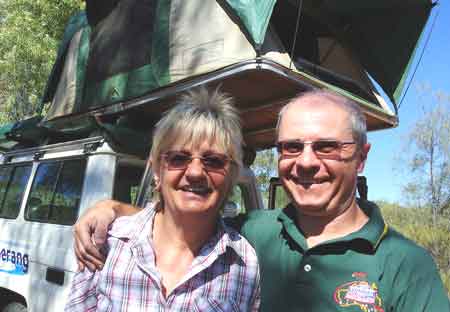 They were amazed by the absurdity of the government having sealed the road all the way from Alice Springs to the turn-off to the bluff, but not the last five kilometers, which excludes anyone not having 4WD from visiting it.
Contact with the locals was a bit of a mixed bag for Alfred and Erika.
On the way from the Bungle Bungles in WA they drove through Yuendumu. They met some locals whom they describe as friendly but the place was “terrible, filthy. Dead cars and beer cans everywhere. A rubbish dump,” they say.
“It was Sunday and the art centre was closed.”
They found that “interesting,” given the number of obviously idle people around, and the world-wide interest in Western Desert art.
They had been thinking of having a look around but decided against it.
They were also disturbed by the rubbish in drinking camps along the highways near Aboriginal communities.
It was a very different experience for Alfred when on a past trip he visited Ipolera, an outstation close to Gosses Bluff and owned by the Malbunka family.
The men in Alfred’s group were shown around – including areas of traditional significance – by a male member of the family, and the women, by Mavis Malbunka, who is also a traditional owner of the bluff.
Alfred says it was a memorable experience, in a beautiful place kept tidy.
Arriving in Alice, he was amazed to find the Town and Country pub in Todd Mall shut down. While it was known as Scotty’s it was his ‘local’ during previous visits, “always full, great atmosphere, a real outback pub”.
Neither Alfred on his many visits to Alice, nor Erika on her first, were in the slightest bit concerned about their safety in the streets of Alice Springs – day or night, nor annoyed by anti-social behaviour.
Will Alfred and Erika come back? For sure – they’re hooked. Will other Europeans start to come again in much greater numbers?
It seems the industry will need to put on its thinking cap: Will charging 30% less double the visitor numbers, at least so long as the Aussie dollar remains high? PICTURED: Alfred and his partner, Erika, at Chambers Pillar and in Alice Springs this week.

By ERWIN CHLANDA Police arrested youths after a pursuit in Alice Springs last night. This followed when two cars were filmed by bystanders driving at high...
Read more
Issue 44

The peril of American turmoil for the Territory

A touch of light: budgerigars, a postscript

By MIKE GILLAM Photo © Mike Gillam Last week’s essay, Booms, busts and budgerigars, didn’t quite get to the bust part. In this pandemic year, A...
Read more