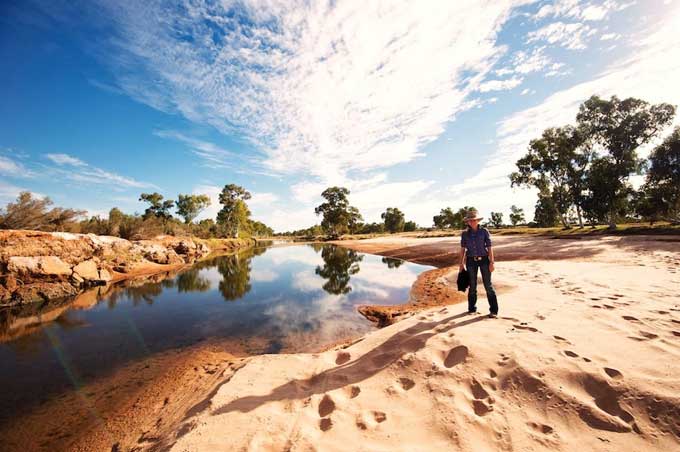 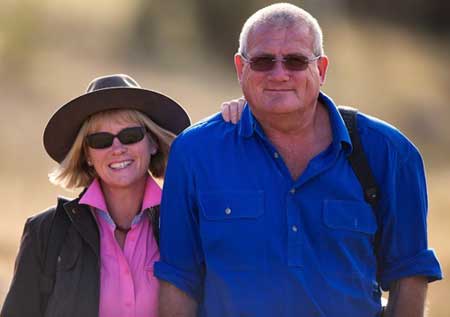 There's more to carbon farming than locking up land and watching the grass grow. To earn money from carbon credits in this brave new world there needs to be "additionality", in other words, the project needs to have come about as a result of the carbon markets, not as a result of land management improvements for other reasons.

There also needs to be "permanence": the farm needs to keep doing its sequestration job (pulling carbon out of the atmosphere and storing it)  in perpetuity.

This is where there is potential for local jobs now and into the future, drawing on a similar skill set to the pastoral industry. So explained Rebecca Pearse, manager for R. M. Williams Agricultural Holdings' carbon project on Henbury Station, when she spoke to the recent ABARES Regional Outlook* conference in Alice Springs.

Ms Pearse and her husband David will be living at Henbury, 130 kms south-west of Alice, when the carbon farm "goes live" next month – quite a change from the esoteric world of the "weather derivatives market" in Europe, which is what they were involved in previously.

Hourly visits to police cells checking on inmates were a routine task for social workers employed by Tangentyere, says former Alice identity Eddie Taylor (pictured).
He says for four or five years in the late 1990s the youth night patrol called at the police cells, spoke to all prisoners and made sure they were OK. Mr Taylor says if the scheme had been continued, it may have saved the life of Kwementyaye Briscoe whose death in the police cells is the subject of a coronial enquiry.

Overseas trips with no report back to Congress – allegation

Congress CEO Stephanie Bell and Board President Helen Kantawara travelled to Hawaii last year together with Board member, Darryl Pearce (former CEO of the native title holder body, Lhere Artepe, since sacked) and a family member of Ms Bell's, according to reliable community sources.

Ms Bell's partner Brian Stirling, also a Board member and former chairman of Lhere Artepe, was booked to go on the trip but cancelled due to ill health. His fares could not be refunded.

If the trip was in some way connected with Congress business – the delivery of health services to Aborigines in The Centre – the sources say the organisation has never received a report about it. ERWIN CHLANDA reports.

Painting the deep patterns of life 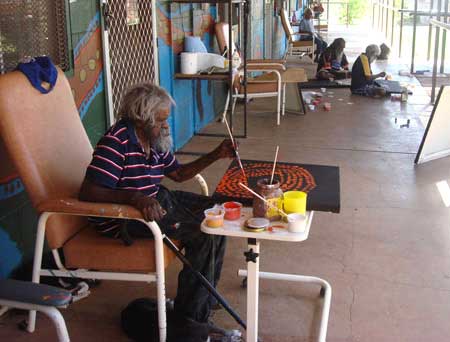 With time inevitably short, three old men from Wanarn, way out in the Gibson Desert, speak to us on canvas with a sense of urgency. They give us the essence and they move on. The fundamental design elements of Aboriginal art from the desert  – the familiar dotted lines, roundels, concentric circles, interlocking grids – are deployed without "embellishment", as Dallas Gold of RAFT Artspace says.

Their names are Ben Holland, Tjunka Lewis and Neville Mcarthur. They live in an aged care facility at Warnan, pictured at left on painting day in a photo by Peter Yates, Tjunka Lewis in the foreground. KIERAN FINNANE reports.

Congress board members appoint their own successors – stonewalling has started

The serious issues raised in yesterday's breaking news report about Congress are not new. The leaked letter was dated April 23, 2012. Two months later, what has the Congress Board and / or the Australian and NT Governments done?

Specific questions put by the Alice Springs News Online to the Congress Board President Helen Kantawara have gone unanswered today. Ms Kantawara's response to our  report yesterday failed to address many of the concerns raised.

The News asked her today, in particular, what action the Board is taking about the apparently acknowledged inappropriate use of a corporate credit card by Congress CEO Stephanie Bell (pictured), to which there was no reference in Ms Kantawara's response.

The News also contacted Warren Snowdon, MHR for Lingiari and Minister for Indigenous, Rural and Regional Health, nominated by the Department of Health and Ageing as the Australian Government person for the News to seek comment from. Total silence, in keeping with his recent treatment of other legitimate enquiries by the News.

Meanwhile, the NT Department of Justice says they are enquiring to matters raised about the changes to Congress' constitution. 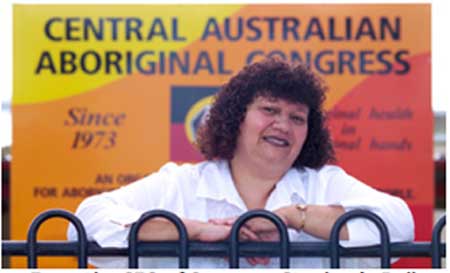 An investigation into the Alice Springs based health organisation Central Australian Aboriginal Congress, which is understood to have an annual budget of around $40m, has found there may be a string of serious flaws in its financial accountability and governance.

The organisation's principal funding body, the Federal Department of Health and Ageing, called a meeting with Congress members last night to answer their "questions, queries and concerns".
An audit commissioned by the department suggests that "in excess of $2m" could potentially be recovered from Congress.
A letter from the department, obtained by the Alice Springs News Online, outlines apparent irregularities with the charging of a 20% administration fee for each project; transfers of funds between projects; the use of a corporate credit card by CEO Stephanie Bell (pictured); unauthorised overseas travel and the failure to return unspent project funds to the department. Italso raises questions about the dealings of Congress with the Central Land Council-controlled Centrecorp and the purpose of large funds invested in a Centrecorp related entity.

Recent changes to the Congress constitution are also of concern, "having a direct impact on the extent to which the organisation might be considered community controlled". ERWIN CHLANDA reports.

John Elferink (MLA for Port Darwin, CL, at left) raised the Alice Springs News Online report in this morning's NT Estimate hearings.
The Territory pays about $6m a year to Congress, including $2m for the Safe and Sober campaign.
He asked Health Department officials about the acquittal process: "They defended their process but could not describe it," says Mr Elferink. "I would be disappointed if the acquittal process were just tick and flick."
His questions were taken on notice. 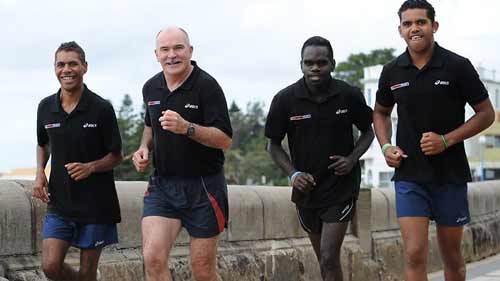 A bitter dispute has erupted between Alice sporting identity John Bell and former world marathon record holder Robert de Castella over a project that took four young Territory Aborigines to New York, to compete in the annual marathon there.

Two of the young runners, Charlie Maher and Caleb Hart, are from Alice Springs.
The project was featured in an ABC TV documentary and is receiving $1.2m from the Federal Government to make it an ongoing initiative, according to Mr Bell.
Member for Lingiari Warren Snowdon had helped to arrange the grant.
Mr Bell says Mr de Castella owes him $100,000 in wages for 20 months' work but Mr de Castella says Mr Bell was a volunteer and had declined to accept money so as not to affect a disability pension. ERWIN CHLANDA reports.

Send in the taskforce: councillor

A prominent councillor says if necessary, the police taskforce should be deployed to keep the peace in town camps: "We must not return to the situation where police are kept out of the camps after dark and needed permits to enter," says Cr Steve Brown (pictured).
Cr Brown, who had the highest vote in the recent council elections, was commenting after a riot in Hidden Valley Town Camp on Wednesday, when it was alleged rioters attacked police, released prisoners from a paddy wagon and smashed police vehicles. Police were also attacked and injured during a melee in Hidden Valley in May. 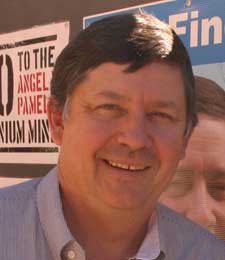 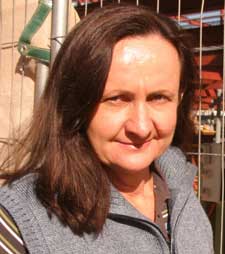 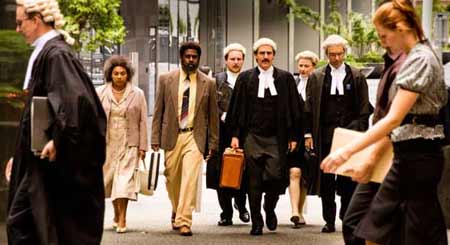 After years of bitter conflict there's no place in Australia where changes to the Native Title legislation and management are more relevant than in Alice Springs.
On the 20th anniversary of the Mabo High Court decision, the Federal Government's objections are clearly to morph Native Title into a path for Indigenous people to acquire land, across the nation, similar to the way landrights were making it possible in the Territory and parts of South Australia. Meanwhile, around the country the subject seems to be a yawn: the telemovie Mabo, directed by Alice Springs' own Rachel Perkins (Bran Nue Dae), flopped on the ABC, according to The Australian, rating 544,000. It's unfair to a well-made  story about a battler who doesn't give up, starring Jimi Bani (The Straits) as Eddie and Deborah Mailman as Bonita. The sometimes dry legal cases in Queensland and finally the High Court – changing Australia's history – are lightened by the touching love story. ERWIN CHLANDA reports.