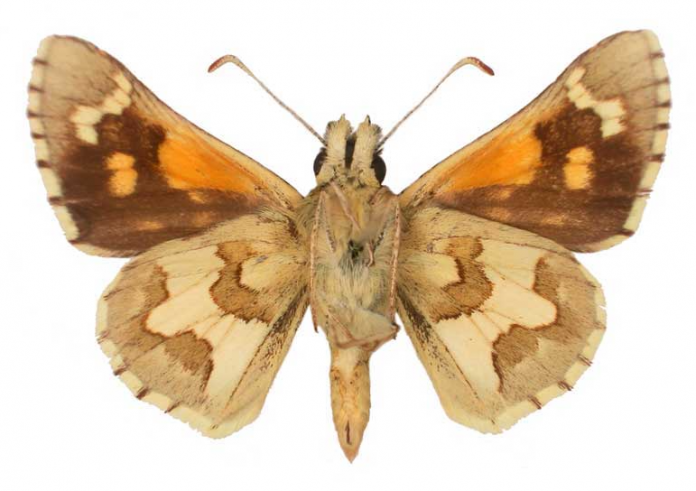 Little is known of the Desert Sand-skipper, one of only two butterflies endemic to the arid land of Central Australia, but what is known is that buffel grass could be its demise.

Dr Michael Braby, Associate Professor at the Australian National University and a leading butterfly expert, says that there is “zero” research being done on the skipper.

Despite possibly being on the brink of falling out of the ecosystem, it is not classified as a threatened species by the Commonwealth or the NT Government, leaving it without legislative protection.

The Desert Sand-skipper caterpillars, which can live for years in self-built shelters waiting for rain, have a very particular diet, only feeding on native Enteropogon, also known as windmill grass.

Dr Braby says that Enteropogon “tends to grow in the swales of dunes and along dry river beds,” the front line of the invasion of buffel.

“Because it relies on this species, very specifically this grass, that makes the butterfly quite susceptible to environmental change, and habitat change in particular.”

Just how difficult a situation the butterfly is in is unknown, but the Threatened Species Recovery Hub of the National Environmental Science Program has identified it as one of 26 Australian butterflies at most risk of extinction.

“It’s one of those species, we’re really concerned about that and really needs more research on the ground to figure out what’s the impact this grass is having and how the butterfly is coping,” says Dr Braby.

There may be pockets where the Sand-skipper is persisting on certain riverbeds or protected areas.

Dr Braby says he has found “immatures” of the scarce butterfly “where the grass density is not so high.”

He thinks that these areas “might afford some sort of protection,” from the ever expanding wrath of the buffel grass, but without boots on the ground research it will be impossible to identify or find these havens, if they exist at all.

In February, a paper proclaimed arid land around Alice Springs as one of 19 Australian ecosystems in a state of collapse.

One of the factors of this collapse was a “loss of biodiversity and ecosystem function degradation.”

Dr Braby says that butterflies in general can be a “good indicator” and can tell us “what’s going on in terms of overall biodiversity.”

Both the February paper and the Threatened Species hub say that removal of buffel grass and fire mitigation are key to saving the Desert Sand-skipper and ecosystem as a whole.

Earlier this month, an NTG spokesperson said that the “government recognises that buffel grass can impact upon environmental and cultural values and intensify rangeland fires, alongside posing a heightened risk to biodiversity.”

Despite that recognition, the spokesperson also proclaimed the supposed upsides of the invasive species:

“The extensive root system of buffel grass enables it to bind soil particles; reducing erosion and suppressing dust, which can be a valuable asset in an extremely arid environment.”

Whether the Inland Desert-skipper and the multitude of other native flora and fauna put at risk by the “highly valued” weed feel the same is doubtful.