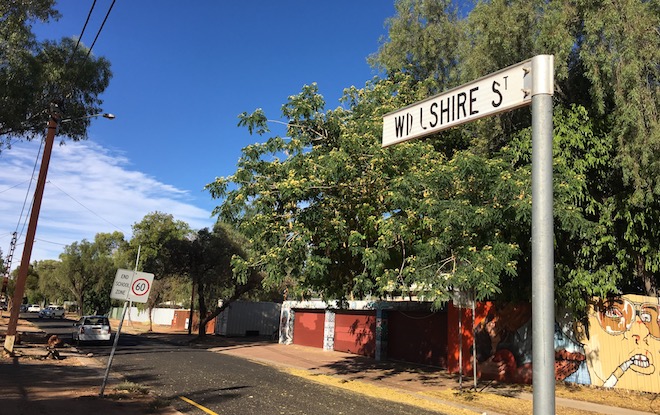 A majority of councillors last night voted to take no further action on the renaming of Willshire Street.

This comes six months after they unanimously voted in support of the renaming and after a woeful community consultation by any standards.

The motion expressed council’s support for the name change and directed that consultation be undertaken to determine potential new names for council to formally submit to the Place Names Committee, a Northern Territory Government entity.

Suggestions for possible new names seem to have been canvassed in individual letters to “stakeholders”, among them Lhere Artepe, the native title corporation, which responded on this point.

However, just one question was asked of the community generally in a poorly advertised online survey.* It was “Do you support the renaming of Willshire Street?”

Mayor Damien Ryan cast doubt on the validity of this majority, suggesting, without citing specifics, that some respondents were not residents of Alice Springs.

He did not go to the validity of the question itself (given that it was not what council had directed officers to ask). 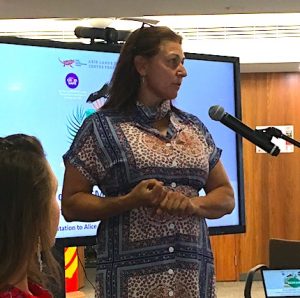 Another arm of the consultation was with the residents of the street.

There was complaint in the chamber last night from one of them, Deborah Booker (left), about the confusing notice given of the meeting.

No-one complained about the paucity of the information put before them. It seems to have been just this:

“William Henry Willshire worked as a Policeman between 1878 – 1908 within the NT as a First-Class Mounted Constable. In 1891 W.H. Willshire was charged and tried for the murder of two Indigenous males from which he was acquitted.”

This misses by a wide mark the core of the information provided by the movers of the original motion, Crs Jimmy Cocking and Jacinta Price: a series of interviews about Willshire by Erwin Chlanda with historian Dick Kimber, a nationally recognised authority on historic matters in the Centre; and an impassioned critique of Willshire by Dave Price, Cr Price’s father.

The egregious historic record for Willshire goes well beyond the two murders of which he was acquitted (in a legal process that wouldn’t pass muster today). The entry on him in as sober a source as the Australian Dictionary of Biography states that “by 1890 Aboriginal deaths associated with his actions certainly exceeded the official number of thirteen.” The entry also refers to his sexual exploitation of Aboriginal women.  And these are matters made clear in his own writing, as the historian D.J. Mulvaney, author of the entry, points out:

Contemporaries praised Willshire as an authority on Aboriginal society because he published four short accounts between 1888 and 1896. Sometimes vivid, they reflected the settlers’ ethos: containing some reasonable anecdotal ethnology and word lists, they are distinguished more for their sexual overtones, boastful sadism and racial triumphalism. ‘It’s no use mincing matters’, he rhapsodized in The Land of the Dawning (Adelaide, 1896), ‘the Martini-Henry carbines at the critical moment were talking English in the silent majesty of these eternal rocks’.

As for Aboriginal women, Willshire opined that “perhaps the Almighty meant them for use as He has placed them wherever the pioneers go.”

Left to their own resources by way of information, residents of Willshire Street attending last night’s meeting referred positively to the man’s writings; questioned a process by council that “disrespects the Australian legal system” (in impliedly challenging a 100-year-old verdict); argued that not only whites committed atrocities, so did Aborigines on their own people; argued that sometimes you do things in your job that you don’t agree with, but you do them because you are ordered to.

This last was a point made by Ms Booker, an Aboriginal resident of the street, who does not support Willshire’s actions, but “we weren’t here, we are not responsible for what happened then.”

You can’t change history, she said, you can’t bring back the dead; you can teach your children that bad things did happen, and ensure they don’t happen again. 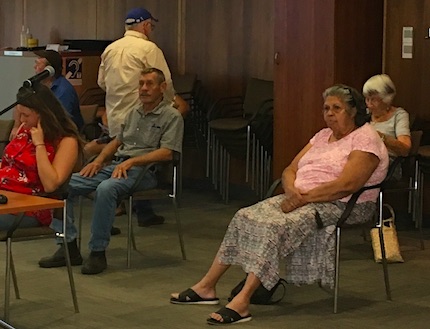 This argument was countered by native title holder Pat Ansell Dodds (right, in pink top), not a resident of the street but someone who feels the issue closely, as “this man killed a lot of my people around Alice Springs, on Undoolya Sation where I come from.” Why would such a man be acknowledged in a street name, she asked.

In contrast, “council has never really acknowledged us properly,” she said. Referring to the statue of explorer John McDouall Stuart, she asked, “What about statues of our old men?”

The racism of the killings, of the shabby legal process that led to Willshire’s acquittal, continues today, said Mrs Ansell Dodds, manifest when “council shut the library on our kids, that’s not fair, that’s racism.”

Dave Price, who does not mince his words when it comes to condemning Willshire, also spoke – against the name change. Daughter Deputy Mayor Jacinta Price was not there to defend the original motion that she seconded but perhaps she has also undergone a change of heart. Her father’s argument was essentially that there are more important challenges to deal with, which is her usual line when it comes to matters seen as symbolic.

Moral arguments aside, Willshire Street residents also complained about council’s process: apart from confusing notice of the meeting, there had been little to no advice or follow up; no information about addressing the financial impact of having to change address on all your documents (despite this having been raised by councillors in the June debate as something council should assist with); being unaware of the community survey (“I don’t purchase the NT News”, said Ms Booker); being misled by being consulted when the motion carried by council was about looking for suggested alternative names.

In response Cr Eli Melky felt himself to be in an “uncomfortable situation”, where his decision “one way or another” would offend or upset some. The way out was that the Town Council is not the “relevant authority”, thus it was an “out of order motion that needs to be rescinded.”

The discussion wouldn’t bring “harmony” but rather would promote “further division”; it’s harder to tackle “the real issues of the community.” However, in finding ways to bring the community together, council could look at recognising Aboriginal people in other ways, he said – with statues, street names, and dual place naming.

Cr Cocking argued that the name change was not about “erasing history” or “cancel culture”, it was about “acknowledging our history”, entering a “reckoning time” about the violence of the past that continues to impact the present.

He didn’t want to “die in a ditch” over the name change but said it was “critical to have the hard conversation” that it has sparked.

He noted the majority support for the change in the online survey; if council were being consistent with the decision it took on the national Aboriginal art gallery, for instance, they would follow that direction: majority decisions are “how our society works.”

Cr Matt Paterson deemed that as Willshire was acquitted, we are “not judge or jury.” He didn’t attempt to reconcile this with his June vote. As with Cr Melky, he was happy to support having some statues of Arrernte people, looking at dual naming – “a conversation we should be having.” But he felt the June motion needed to be rescinded, “we need to go back and start again.”

Cr Glenn Auricht was similarly untroubled by his support for a name change in June and his opposition last night. While well aware of the “war zone” of early “pioneering days”, he also pointed out how quickly Aboriginal people and settlers learned “to work together if either were to survive.”

As for the name change, it was “cut and dried”, the residents didn’t want it so “leave the street alone” and “don’t ever bring this up again in the future.”

Cr Banks said she would not support rescinding the motion “until we do our business properly.”

The poor implementation of the motion “reflects badly” on council, she said, asking the CEO and officers to accept her criticism of the process as “constructive.”

Cr Jamie de Brenni supported rescinding, out of respect for the residents. “Enough is enough on Willshire,” he said, get it “off the table” and then look for ways of recognising community history “in a positive manner.”

Cr Paterson proposed an alternative approach, a motion that would not involve rescinding, but simply direct council to take “no further action with regard to Willshire Street”.

So that is what happened, no shame.

A division was called: it showed the Mayor, Crs Paterson, Melky, de Brenni and Auricht for; Crs Banks (voting, below), Cocking, and Catherine Satour against.

*The existence of the community survey was advertised on the council’s website and in the NT News on 24 July and 7 August.

The last print edition of the Centralian Advocate, previously council’s organ for advertising, to the exclusion of all others, was at the end of June; council provided no information on the local circulation of the Darwin-based NT News.

Council continues to place its advertisements in the NT News.