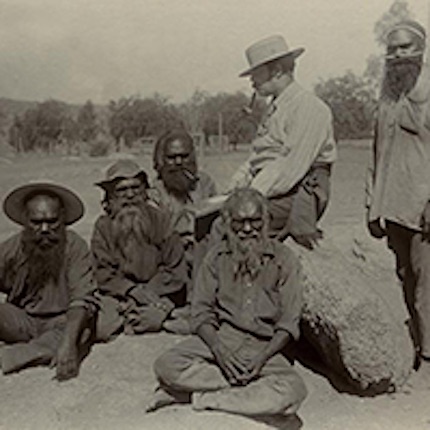 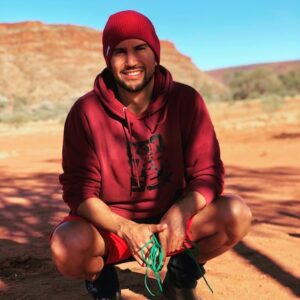 Acting on street name changes and on new public works commemorating Aboriginal heritage and history – why does change matter? And if it doesn’t happen now, then when?

Concerns with contemporary social problems should not be used as an excuse for not reckoning with the wrongs of the past, says Joel Liddle Perrurle (pictured, photo supplied).

“All that will end up doing is kicking the can down the road” – as has been done, on and off, for decades.

Mr Liddle is one of three authors of a recent article calling for a public commemoration of “unsung Arrernte heroes” in response to the statue of explorer John McDouall Stuart, erected by the Town Council, after protracted controversy and delays, in Stuart Park.

“He is lauded throughout the country. It’s astonishing that someone like him is not honoured in his home town. In any other town, his statue or street sign would already be up – what a good person to act as a role model, whether you’re Indigenous or non-Indigenous.”

Mr Liddle, an Eastern/Central Arrernte man, until recently was a senior research officer with the Baker Heart and Diabetes Institute. He has a BSc in Exercise Science and Human Movement (Australian Catholic University in Melbourne) and a graduate diploma in Indigenous Knowledges  (Charles Darwin University in Alice Springs). Now he is devoting himself full time to doctoral studies at the University of Melbourne.

Growing up in the eastern states, as a child Mr Liddle came most years to Alice Springs to visit his grandmother, Emily Perkins. As a young adult he was back and forth regularly from 2006 until returning in 2011 to live and work and raise his young family. He was determined to learn his Arrernte forebears’ language and has since had the “empowering” experience of becoming a fluent speaker as well as learning to read and write Arrernte.

His doctoral research is looking at the contribution a positive identity makes to the social and emotional  well-being of Indigenous people – an identity built on knowledge and literacy in their languages, their religion, their cultural history.

In today’s world, this identity has to be bicultural and bilingual (or multi-lingual) so that individuals are fully equipped to benefit from economic activity while retaining their cultural knowledge.

“In Central Australia our old people have been saying that throughout the years – ‘We need young people to have language, to have culture’.  That’s the foundation of my project.

“As young Aboriginal people it’s really critical that you have grounding within your Aboriginal identity. If not, you run into all sorts of identity issues that lead you down paths you don’t want to be going.”

Irrapmwe (King Charley) in the foreground. Francis Gillen sitting on the rock.  Spencer and Gillen collection.

This is where an acknowledgement of Aboriginal history and contact history in the wider community comes in, by making a contribution towards building that positive identity.

“If you look at other parts of the country, where Indigenous people don’t have access to their languages and cultural history, you still find the social issues, the substance abuse, the family violence issues. The eradication of people’s identity only compounds their issues further.

“We’ve got such an opportunity here.  Despite enormous pressures, languages and cultures have survived. We could celebrate that and become a unique part of the country, taking the lead in dual place-naming and commemoration of our unique history and desert knowledges.”

He points to the example of Wales, where the Indigenous language was in serious trouble, before there was a strong revivalist movement with dual place-naming and signage throughout the country. The language is flourishing again, difficult orthography and all.

“There’s no reason why we can’t do that stuff here, become a showpiece for Australia.”

He argues strongly for the acceptance of the orthography developed nearly five decades ago by John Henderson and Veronica Perrurle Dobson, in consultation with Elders and linguists. They did this work so that people could become literate in Arrernte: the written language, with sounds quite different from those of English, needed to reflect correct Arrernte pronunciation.

On commemorating our history, Willshire, he argues, should never have been honoured “in any way”. And once people become familiar with his story – much of it recounted “by his own pen”– most of them agree.

“We’ve seen that with the Town Council.”

He’s referring to the recent unanimous vote by councillors to support a name change for Willshire Street, welcoming particularly the role of Cr Jacinta Price, who seconded council’s motion and provided her colleagues with detailed information about Willshire’s appalling record of violence and sexual predation.

That shows the cut-through of this issue “regardless of people’s political persuasions, whether they’re conservative or liberal”, says Mr Liddle.

While the name change decision finally rests with the NT’s Place Names Committee, they have asked the Town Council to conduct the community consultation on the matter. Mayor Damien Ryan described that as “an abdication of their [the committee’s] responsibility”.

Mr Liddle urges the council to take this opportunity to engage a historian to work with them on the process, to help bring the stories to the community.

Because the process isn’t about erasure, it’s about knowing and acknowledging our history and about bringing some contemporary critical thinking to bear upon it. 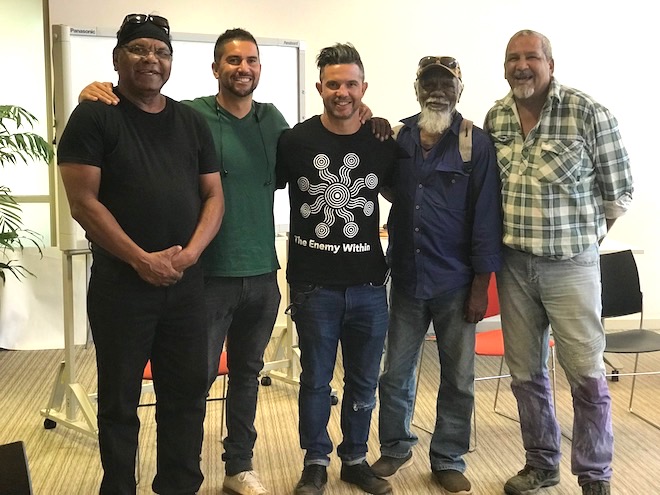 Mr Liddle, second from left, with Baydon Williams, Joe Williams from ‘The Enemy Within’, Andrew Davis and Michael Liddle at the men’s health and well-being workshop, Codes for Life. Photo supplied.

For example, McDouall Stuart is not a controversial figure like Willshire was, says Mr Liddle.

“There’s really no evidence in the archives showing Stuart to be a particularly bad character, but there’s a whole lot more to the story that could be acknowledged.

“He wouldn’t have made it without Aboriginal guides the whole way along.”

Yet he is depicted as the solitary hero (not even his fellow expeditioners are acknowledged) and –what was most insensitive to the community – he is shown holding a gun. Further, the statue was raised in “one of the town’s parks most popular with Aboriginal people”.

It’s a permanent reminder to them of the many episodes of violence in colonial contact history.

As well, Stuart already has a highway, a park, and monuments acknowledging him – there are other people worthy of acknowledgement, and Aboriginal people especially want characters from their own community to be among them. It’s time.

King Charley and Jim Kite both played significant roles in the early contact between Aboriginal and non-Aboriginal people.

“They were negotiators, intermediaries for their communities. Acknowledging them would give us the opportunity to tell that important history, great stories.

“Most people like to learn about the history of Central Australia, it is such an interesting place and our contact history is much more recent than elsewhere. People still have close connections to this history.

In one of Willshire’s books, for example, Mr Liddle has encountered one of his own ancestors, his great great grandmother, “Untyeyampe, aka Maggie Kana, aka ‘corkwood honey” : “Willshire met her, there’s our people meeting this guy.”

There may also be the opportunity to think again about how we acknowledge important figures, not necessarily following the mould of the statue depicting the solitary male hero, isolating them from their context. For Aboriginal people, in particular, family and kin are always central.

“There are so many brilliant photos in the archive of the old men and women with their families living around the Telegraph Station,” says Mr Liddle.

“A really good artist could do something great with them, that would show and celebrate the region’s history, not just the singular male story. In this day and age people want to see more than that.”