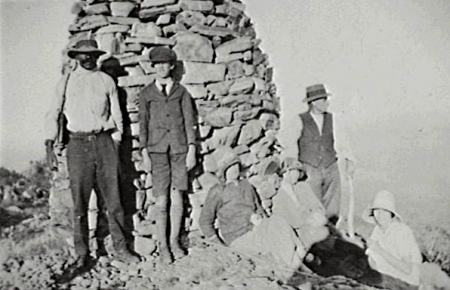 All of the iconic Mount Gillen (Alhekulyele), against which Alice Springs nestles to the south-west, will be in its entirety subject to “restrictions, entry and use”.

It began as the closure of an eroded walking track from Flynn’s Grave to near the “nose of stone,” the peak of the mountain which has great significance for Arrernte Traditional Owners.

The Aboriginal Areas Protection Authority has now released an image of the sacred site occupying all of the mountain, as we reported yesterday, stretching from Heavitree Gap (Ntaripe) to Honeymoon Gap.

Details are still unclear but it is believed Arrernte Custodians Benedict Stevens and Peter Renehan were the key people involved in a process lasting several years.

It is also understood that the sacred site (main photo) may provide rights for certain land owners (see notes below).

Is that so, we asked the authority.

“Who are they and what are their rights?

“What public consultation has taken place with local people, tourism representatives, governments and others” prior to the decision?

The restrictions are due to start in March next year.

Meanwhile police have asked recreational climbers of Mount Gillen to consider alternative walking tracks with the announcement this week of the closure of the walk.

Northern Territory Emergency Service are undertaking a risk assessment of the Mount Gillen track “as conditions are considered hazardous given the extreme heat at this time of year and the eroded path” and there is the possibility of an increase in rescues.

Local historian David Hewitt found this photo (top right) taken in 1926 when working with Adelaide House volunteers a couple of weeks ago.

We don’t know who Mr and Mrs Herbert were, but Sister Small was one of the first two nurses at Adelaide House. Sister Pope probably took the photo.

“The interesting part is that the ‘Black Tracker’ was Charlie Cooper who worked with Sgt Stott,” says Mr Hewitt.

“He was the senior Traditional Owner of Mt Gillen and he guided the party to the top.”

Sacred sites are recognised and protected under the Aboriginal Land Rights Act and the Northern Territory Aboriginal Sacred Sites Act.

The Mparntwe custodians and the Tjoritja West McDonnell National Park joint management group have asked for many years for the [Mt Gillen] climb to be closed, and for restricted entry to the site.

Discussions have been ongoing since 2013 and have involved many meetings between custodians, Parks, and the Land Trust.

The Sacred Sites Act also takes into account the proprietary rights of the owners of land. This means that a landowner may enter a sacred site on their land, and remain on it.

Under the Sacred Sites Act, should a developer wish to undertake work near a sacred site they can seek an authority certificate from the Aboriginal Areas Protection Authority.

Certificates are based on consultations with custodians and provide clear instructions on what can and cannot be done in and around sacred sites.

Past Elders allowed climbing Mt Gillen
The ban on climbing Mt Gillen reruns many of the arguments of the contentious ban on climbing Uluru-Ayers Rock.
Past custodians of the Rock including men like Paddy Uluru, Toby Naninga, Tiger Tjalkalyrri and Mitjenkeri Mick were either indifferent to visitors climbing it, or in the case of Tiger and Mick actually acted as guides and encouraged people to climb.
The safety and environmental concerns at Uluru were exaggerated to fit a predetermined agenda to close the climb driven from the mid 1980s by Parks Australia’s Canberra based bureaucracy.
This week we discover thanks to local historian David Hewitt, that Charlie Cooper, the senior traditional owner of Mt Gillen, guided visitors to the top of his mountain in the 1920s.
Surely if Charlie Cooper thought it was OK for visitors to enjoy those wonderful views then that opinion should be respected by the current group of custodians.
What is the use of tradition if it is constantly being rewritten? The new restrictions at Mt Gillen apparently represent a case of old traditions being ignored and re-written and the views and actions of old men being disrespected in the name of postmodernist politics and power.
The timing of the ban at Mt Gillen appears to breach the NT Sacred Sites Act (1989) that requires the Aboriginal Areas Protection Authority to provide landowners with suitable notice and provide for written representations and consultation prior to decisions being made.
Based on what has been printed it is not clear that this due process has been followed.
Perhaps a local lawyer could look into it? More so, it appears the rightful owners of the mountain, the innocent people of Alice Springs be they black, white or brindle, have been completely ignored and their mountain stolen from them by the actions of a few who claim authority where none may exist.
The other reasons for banning the walk including minor erosion and safety concerns do not stand up to any scrutiny.
The picture of Charlie Cooper at the summit with his guests in 1926 speaks loudly of reconciliation, of bridges being built, culture being shared and new stories being written.
It is sad that almost 100 years later those stories and shared experiences are being erased by the mysterious motives of a few.
Marc Hendrickx
Berowra Hts NSW
former Alice Springs resident
Facebook
Twitter
Pinterest
WhatsApp