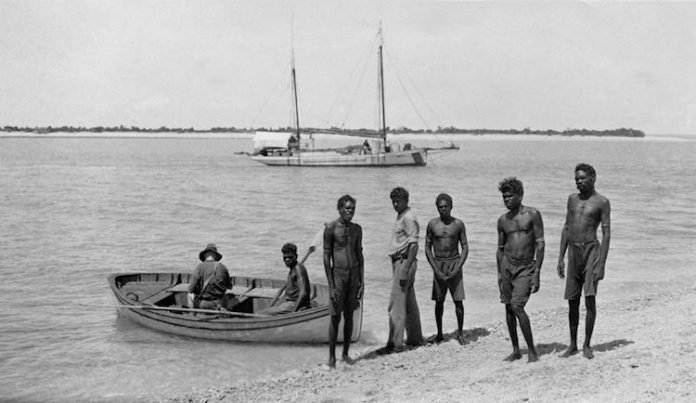 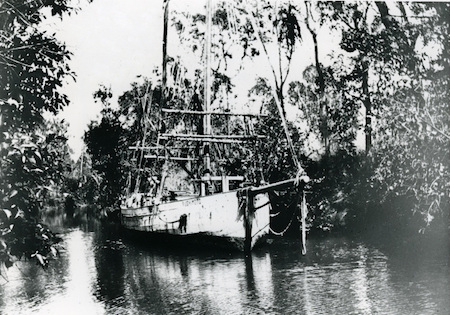 In 1933 five Japanese trepangers had been killed by Aborigines in the Caledon Bay district of Arnhem Land after taking Aboriginal women.

Four police officers with native trackers had been sent out to capture the killers.

One of the officers, Constable McColl was speared to death by an Aboriginal man called Tuckiar (Dh ‘a’ kyarr), and there was a general call for a punitive expedition to be sent out to “teach the blacks a lesson!”

The Japanese Government complained to the Australian Government about the incident.  This drew the Prime Minister and the Minister for the Interior into the fray.  The murders attracted national attention.

Two intrepid Anglican priests stepped into this controversy. 500 miles away at the Anglican Oenpelli Mission run by the Church Missionary Society (CMS) the Rev A J Dyer was greatly alarmed at the prospect of a punitive expedition.

Dyer had made a visit to Caledon Bay in 1916 and knew something of the area.  He did not believe that potentially more killing was the way to deal with the problem.

He said: “Aboriginals cannot be judged by our legal and social codes, and I suggest that before any further action is taken a commission of men acquainted with the Aboriginal customs … investigate the causes of these killings.”

Dyer planned to go immediately to Caledon Bay to see if he could sort out the problem.  CMS in Sydney said “no” as did the Prime Minister’s Department, but Dyer took no notice.

Spearheaded by Dyer, CMS was able to convince the government that there was value in allowing a peaceful, unarmed expedition of missionaries to approach the Aborigines first and assess the situation.  The aims of the expedition were:

• To serve the ends of justice, law and order in the community.

• To cultivate in the Aboriginal mind a sense of fair treatment, security, and a realisation of our recognition of their rights, within just bounds, to live their lives in their own way.

• To establish mutual understanding, respect and goodwill between the black and white races.

The Rev H E Warren, who had served at the Roper River Mission, was to lead the expedition.  He immediately met with the Prime Minister, Mr Lyons, and was given six months in which to make friendly contact with the Caledon Bay Aborigines.

Both Warren and Dyer had considerable experience and knowledge of northern Aborigines, but more importantly they both possessed a Christian motivated regard for their black brothers.

The expedition set out in the CMS boat, the Holly, from Groote Eylandt on December 5, 1933.

Tension grew on the Holly as she entered Caledon Bay.  A host of Aborigines was sighted on the beach with a number clambering over a beached vessel.  The Holly dropped anchor.

The crucial moment had arrived.  Warren stepped into the dinghy to go ashore with Jalma and David who were two Caledon boys.  He prayed silently as the dinghy approached the shore. The Aborigines stood silently in the shallows brandishing their spears.

Without warning they rushed forward shouting and waving for they had recognised their fellow tribesman Jalma.  There was much excitement and relief.

Warren and Dyer learnt, with the help of the white men who owned the beached vessel and from an Aboriginal woman named Clara, that the killings had been perpetrated by Aborigines from Blue Mud Bay.

Dyer drew the telling conclusion that if an “indiscriminate punitive expedition [had been sent] against the Caledons [there] would have been an entire miscarriage of justice.”

Warren and Dyer then sailed to nearby Woodah Island and with Clara’s assistance they discovered McColl’s grave.

After Christmas they sailed to Blue Mud Bay where they found the wreck of another boat where they set up camp.  Tuckiar and his tribe were nearby. 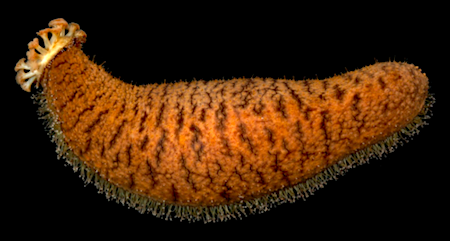 Later Warren and Dyer went ashore and after some lengthy persuasion were able to induce the terrified Tuckiar to go aboard the Holly.

Warren sat in the bow of the boat as he talked to Tuckiar.  After some lengthy chatting Tuckiar admitted to killing McColl.  He admitted also to killing the two sailors from the wreck with the assistance of Jimbarrion.

By this time Warren had become gravely ill with a badly infected leg and he had to be taken to Burketown, over 500 miles away.  After this demanding task Tuckiar came with his tribesmen to Groote Eylandt and it wasn’t until March, 1934 that Dyer was ready to take them to Darwin to face trial.

However, Tuckiar and his men escaped at the first opportunity and Dyer had to go ashore with his Aborigines and find them all over again.  He encouraged them to come aboard once more and the unlikely group continued to Darwin.

The Aborigines were committed for trial and became quite terrified for they believed that they were to be immediately executed.  Not even Dyer could pacify them.

The plight of the Aborigines was extensively reported in the Australian press and the aroused public indignation was directed against Dyer who received hundreds of hostile letters.  Dyer was deeply mortified.

He took the letters and laid them on the altar in Christ Church, Darwin, where he quietly prayed.  The fact that Warren and Dyer had led a peaceful mission and brought the Caledons in without force or violence was quite forgotten.

Three of the Caledons were condemned to death by the gruff Judge Wells of the Northern Territory Supreme Court for killing the Japanese.

Tuckiar was found guilty of murdering Constable McColl and condemned to death.  Dyer was greatly distressed, but felt he could do more.

There was a sense that justice had not been served.  A few days later the Crown Prosecutor came to the Darwin Rectory to see Dyer.

He had been informed of all the detail that Dyer had given to the Acting Administrator and felt that there were grounds for an appeal.

The Crown Prosecutor drew up an appeal in Dyer’s name and charged no fee.  Dyer signed the document which was dispatched to the High Court of Australia.  In the meantime, Warren had also contacted Canberra and asked for a remission of the sentences. 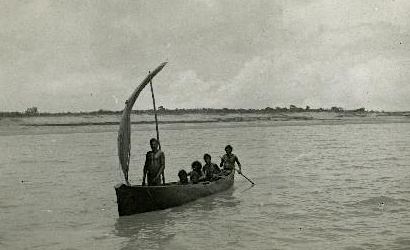 A few weeks later Dyer received two pieces of significant news.  He learnt that a plane in which Warren was flying to Tasmania had disappeared and that all on board had perished.

And on the next day that the High Court had overturned the sentences and that the Caledons were free.  Dyer described the outcome as a fitting memorial to the Rev H E Warren who had done so much to bring justice to the Aborigines of Caledon Bay.

The story does not end here.

As soon as he was released Tuckiar left Darwin and made his way back eastwards to Caledon Bay.  The only way he could get there was to walk.  He knew how to find his way.  Inwardly Tuckiar knew he would not be safe until he reached his own tribal lands.

Other tribes could be hostile.  He moved quickly resting only for short periods of time.  It wasn’t long before he developed a sense that he was being followed, which caused him greater anxiety.

After a number of days of travel Tuckiar knew that he was being pursued and that his pursuer was not far behind.

His pursuer was in fact an Aboriginal kinsman of Constable McColl whose sole purpose was to find Tuckiar and kill him.  Tuckiar never returned to his tribal homeland.

EDITOR’S NOTE – John P McD Smith is the Chair, St Francis’ House Project. He writes about this report: “The information for this article comes from a small stapled booklet that was written and published in the late 1940s by the Rev A J Dyer.

“The booklet was published by the Anglican Diocese of Sydney and now very few copies exist. I was lent a copy of this publication from which I gleaned this truly amazing story. I had to return the booklet to the owner.”

This story is also the subject of a book by Ted Egan, Justice All Their Own: The Caledon Bay and Woodah Island Killings, 1932–1933. MUP, 1996; and of an hour-long documentary, Dhakiyarr vs the King, 2004, produced by CAAMA and directed by Tom Murray & Allan Collins ACS.

IN 2003 Descendants of Tuckiar and McColl came together in a ceremony of reconciliation at the Supreme Court of the Northern Territory, where a memorial was unveiled.