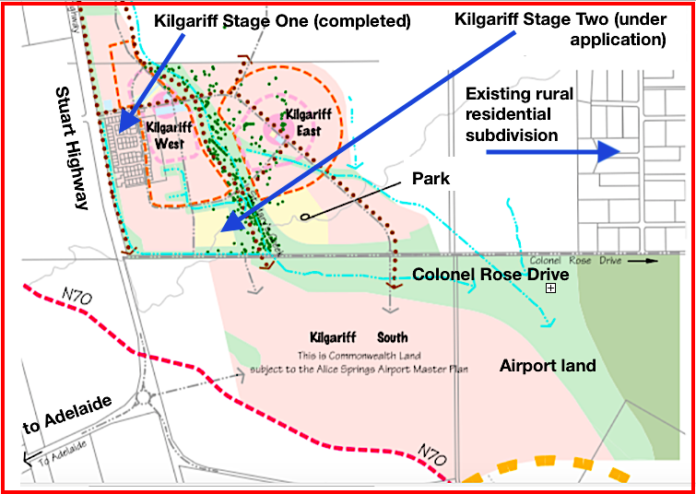 Plans for a substantial population centre south of The Gap are being disclosed in an application by the NT Government’s Land Development Corporation (LDC), giving more details than earlier proposals.

For now the corporation is seeking government approval for Kilgariff Stage Two of 87 lots in two stages, located between Kilgariff Stage One – already mostly sold – and Colonel Rose Drive.

But a “Kilgariff Area Plan” is also included in the application “to guide urban development” there which extends to the east as far as the existing Heffernan, Petrick and Schaber roads rural subdivisions.

These have mostly two hectare blocks while the Kilgariff West proposal details a portion of the site requiring no less than 10 dwellings per hectare.

The plan shows future developments reaching deep into airport land, which is leased from the Commonwealth, south of Colonel Rose Drive.

“The vision is to promote housing diversity, affordability and good connections to Alice Springs,” says the LCD in its application.

“The aspirations for the plan also seek to encourage the use of renewable energy sources through built form which includes passive solar design, PV generation and solar hot water.

“Walkability is also a key aspiration.

“Natural features and vegetation valued for their cultural, species, habitat, stature or natural amenity have been retained where possible.

“Existing native vegetation within the proposed development site and public infrastructure areas will only be cleared concurrent with development need.

“The proposal integrates streets with open space and drainage corridors to create an integrated network of natural areas for recreation and amenity.

“The paths will link the streets with the open space and drainage corridors providing ready access for all residents.

“All proposed lots are afforded by adequate flood protection.”

“The park is centrally located and convenient,” says the application.

“In addition to the basic requirements of paths, shade and seating, additional facilities that will complement the existing and future needs of a growing community will be resolved.”

The names Kilgariff West, East and South are on the map attached to the LDC application. Other captions are by the News.

The LDC’s text under Kilgariff South is: “This is Commonwealth Land, subject to the Alice Springs Airport Master Plan”.

The proposal is open for public comment until Friday this week. 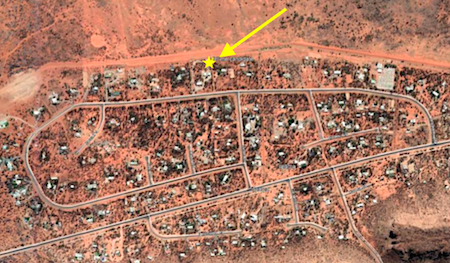 Location of the proposed tower.

There have been many complaints about the poor mobile phone reception in the area.

The tower’s location is on the northern side of Greatorex Road, about 100 metres west of the Webb Road turn-off.

A company acting for Telstra, Service Stream, says in a letter to the NT Development Authority that the project is in response to “numerous customer complaints.

“The unique terrain around Ilparpa and White Gums makes it difficult to provide high speed 4G services from existing facilities.

“Coverage to this area is predominantly provided from the multi-carrier telecommunications facility above The Gap.

“This facility also has to serve a very large area south of the MacDonnell Ranges so cannot be tilted down to serve Ilparpa without creating a larger degradation of service,” says the letter.

“A dedicated facility for Ilparpa and White Gums is required. The terrain helps isolate services to White Gums and Ilparpa and will work together with the existing site at Blatherskite Park.

“Recent complaints from this area have targeted the inability to connect to services and adequately work from home. The proposed facility will provide enhanced in-building 4G coverage to improve connectivity for Ilparpa local business and work from home residents.”

The proposal is open for public comment until Friday, August 7.