Home Issue 27 Roads, fracking, weeds and IT are on cattlemen's mind
Issue 27Volume 25

Roads, fracking, weeds and IT are on cattlemen’s mind 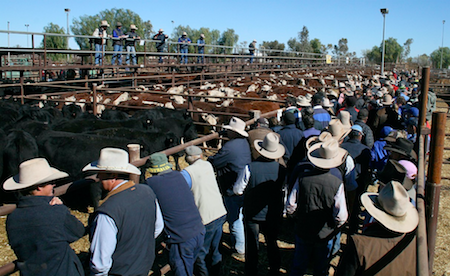 He says if – for example – the Plenty Highway (above) were to be better maintained and sealed, it would subtract up to six and half hours driving per trip.

“It can also have a great impact on the cattle,”  says Mr Manicaros.

“The more the cattle are bounced around, the greater the weight loss.”

Data analysis from Future Beef estimates that for every six hours without feed or water, cattle lose 2.5% of their live weight.

The NTCA says that currently 80% of the Territory’s roads are unsealed.

In a submission to the Government’s Territory Economic Reconstruction Commission (TERC), Mr Manicaros (pictured) has suggested a $535m, five-year road project that he says would create nearly 3000 jobs.

The six roads put forward for works are Marindja Road and the Sandover, Tablelands, Carpentaria, Buchanan and Roper highways.

The Plenty Highway has already been allocated funds through the Outback Way project, which the submission suggests should be accelerated from its current schedule.

“It’s these main feeder roads which we need to see both sealed and upgraded.

“Because there are literally hundreds of millions of dollars’ worth of stock on all of those roads.”

Some 80% of the money for a project such as this would come from the Federal Government, leaving the NT to foot the final 20%.

On roads, the TERC’s first report says, “quality road infrastructure is the backbone of economic development across a region.

“Roads are also expensive to build, and the Territory’s vast distances provide a challenge for achieving the right balance between cost and access.”

Other than supporting the existing project on the Central Arnhem Road, and suggesting further funding for the project, the TERC has little else to say on the subject, aside from that it “recognises the potential value of the Tanami Road, with its gradual sealing funded by the Australian Government under the National Partnership Agreement on Land Transport”.

Mr Manicaros and the NTCA also propose a $15m spend on a three-year weed eradication program that stands to create almost 500 jobs.

“There are more than 40 identified weeds in the Northern Territory,” says Mr Manicaros. 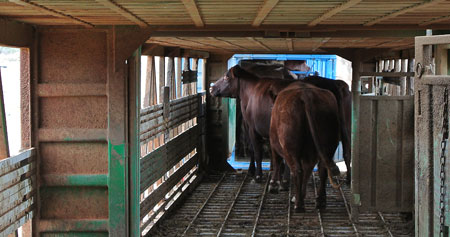 Separate from the TERC submission, the NTCA is calling for a $20m spend on biosecurity over the next term of government that would make up for “dramatic reductions in resources both within the department of primary industries and the department of environment as it relates to biosecurity.”

The NTCA calls for at least three wash down bays across the Territory to combat the further spreading of weeds and potential industry-crushing outbreaks such as African Swine Fever.

“We have no wash down bays that are public in the Northern Territory at all.

“So as a part of that biosecurity injection, we’d like to see at least three, potentially four in the Northern Territory, certainly one each in the Barkly, Katherine and Alice Springs areas, and one potentially on the South Australian border.”

Mr Manicaros says that this will become increasingly important as the resource industry continues to grow and more and more equipment is crossing state borders.

He says: “There is a view from within government that the resources sector might be prepared to invest in that area as a part of their social license commitment and their own required biosecurity measures.

“At the end of the day, we don’t care how they come to be, as long as there are wash down bays put in place as a priority, over the next year or so.”

Another problem rural producers represented by the NTCA are facing is internet connection.

The NTCA claims that rural users are now restricted to “minimal download, minimal speed and a disproportionate increase in the price per meg”.

“At the moment many of our producers are using satellite technology to measure and monitor water bores. That can be quite expensive.

“There are other innovative applications that are digital and mobile phone based that could be used. Unfortunately, we don’t have access to them because we don’t have the connectivity or the infrastructure in place to be able to do it.

“That needs to improve before we can take full advantage of innovation in the cattle production sector.”

Also, driving a truck through the desert can be a dangerous task, one that could be made safer with continuous ‘phone service along the Territory’s main veins.

Pictured in 2015 is 12-year-old year six pupil Ziggy Solczaniuk doing satellite based School of the Air work at Ross River. 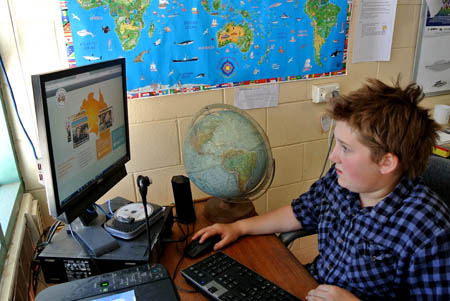 “No one is expecting a Rolls Royce service, but from a safety point of view, we would hope that we could have some sort of relayed communication service that allows us to access mobile phone services far more frequently than we can.”

To solve this problem, Mr Manicaros suggests a dollar-for-dollar-matching scheme between the NT and Federal governments in association with service providers.

“That would be extremely beneficial for the whole of the Northern Territory, not just the pastoral sector.”

Then there is the topic that seems to be piercing almost every conversation around the upcoming election: Hydraulic fracturing.

Throughout the time effected by Covid-19, Mr Manicaros says the cattle industry “has managed to maintain its productivity and also continue its output.

“It’s also managed to keep the 10,000 people that it employs, directly and indirectly in jobs.”

It’s an industry that works off low input costs, and high output, however, he says that more certainty is required for people who invest in NT cattle and farming.

The NTCA policy position paper suggests that a “power imbalance” between land owners and resource companies needs to be corrected to avoid “increasing impacts and tension between primary producers and mining and petroleum licensees” as the “intensity of exploration and exploitation increases”.

To balance the situation, the NTCA says that the land access agreements both under petroleum and mineral legislation need to be aligned so that “landholders are no longer dealing with two sets of rules”.

As it stands, a company wishing to use hydraulic fracturing to access shale gas on a property must pass a set of 24 standards, including compensating the landholder. However, if agreements cannot be reached, two weeks’ notice of upcoming “regulated activity” (read: fracking), will suffice.

Without changes to the Mineral Act, there can be no certainty. Without certainty, investment is at risk.

Balancing agriculture and resources will prove tricky for whomever is in power come September.