Home Issue 26 Natural gas: Anything you can do I can do better
Issue 26Issue 27Volume 25

Natural gas: Anything you can do I can do better

The Tweedledum, Tweedledee story doesn’t end with agreement over fracking: Now both the CLP and the ALP are buying into hydrogen.

And both are faced with the this dilemma: “The new chair of the Australian Energy Regulator, Clare Savage (pictured; quoted in Michael West Media) is saying that if the gas transmission networks do not convert to hydrogen, these assets may be stranded. That’s many billions of dollars in gas pipelines stranded.”

And both parties are coming up with the same answer: A little bit, say 10%, of hydrogen mixed in with the gas in the pipes is OK.

Of course the trouble with that is we’d be stuck with around 90% fossil fuels, and this of course is a big no-no. Or is it?

Hydrogen (the “H” in H2O – water) is made by separating it from the “O” (oxygen), using electricity. To gain electricity from hydrogen the process is reversed.

Minister for Renewables Dale Wakefield says she estimates 15% hydrogen in gas pipes is OK while emphasising that Labor’s intention doesn’t end with 50% renewables by 2030, but aims for “net-zero emissions by 2050”.

A faulty valve caused this explosion at a hydrogen service station in Norway (photo Fleet Europe).

Meanwhile a spokesman for the CLP quotes a group including GPA Engineering for the Government of South Australia: “The review found that the addition of 10% hydrogen (by volume) to a typical natural gas blend has no significant impacts or implications on gas quality, safety and risk aspects, materials, network capacity and blending (providing the mixture is homogeneous).”

With gas playing the dominant role in these policies we asked Ms Wakefield: “During 2019/20, [how much did] the NT Government spent on the gas industry in any form of subsides and public service costs managing and supervising that industry?” We received an answer to this.

We did not on this: “How much did the government collect from the gas industry in royalties and other income?”

We put similar questions to the Opposition which has now provided us this answer: “All of the information on royalties and production is in the hands of the NT Department of Treasury and Finance. The information is not public and would be commercial in confidence.”

Ms Wakefield gave us these answers to the first question: “The Department of Primary Industry and Resources allocated budget for the Energy Division for 2019/20 was $2.22m.

“There were no subsidies paid to the gas industry from the Northern Territory Geological Survey (NTGS) in 2019/20.

“NTGS run a grants scheme as part of the Resourcing the Territory initiative, but all of the grants were awarded to the minerals industry not the oil and gas industry.

“All other Resourcing the Territory funds are used for geoscience programs, data acquisition and promotion, with none going to the gas industry as subsidies.”

A spokesperson for the NT Government, in response to our enquiries, said:–

• There are not significant implications to gas quality or safety for blending natural gas with up to 10% hydrogen by volume in the gas distribution network.

• The University of Queensland found that most people were unconcerned with blends of up to 10% hydrogen.

• Research projects trialling or studying the injection of hydrogen in gas distribution networks included Hydrogen Park SA (up to 5% hydrogen by volume); Western Sydney Green Gas Trial – Jemena (up to 2%); Canberra Institute of Technology (up to 100%).

• In the UK there are two projects which are trialling hydrogen injection percentages which are greater than 10%.

• HyDeploy, determining whether blending up to 20% is feasible.

• H21 Leeds City Gate is a study to determine the feasibility of converting the natural gas network to 100% hydrogen – presumably that includes how to avoid some nasty explosions.

• Once the useful life of a pipeline has passed then it will be decommissioned and the pipeline route will undergo environmental rehabilitation. 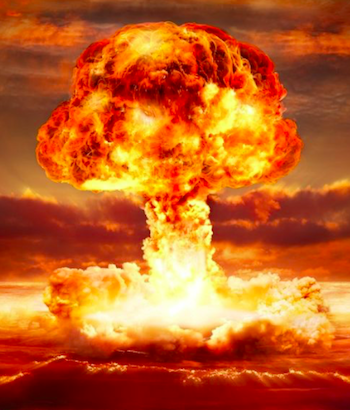 Not much of that is likely to swing an election in 39 days’ time: No cranes in the skyline.

And then of course there is the hydrogen bomb (photo Asia Times).

That of course didn’t stop the hype that has become the trademark of the Gunner Government, this time with Ms Wakefield on the microphone: “The NT’s first ever Renewable Hydrogen Strategy to turn our natural competitive advantages into clean, permanent local jobs … the Territory is well placed to position itself at the forefront of the developing renewable hydrogen industry … world-scale energy production and export industry … taking real action on climate change … the strongest protections for water and our environment the Territory has ever seen … local jobs.”

In a Me Too spirit Opposition Leader Lia Finocchiaro chimes in she will “aim to” connect the Territory (including Alice Springs and Tennant Creek) to the national electricity market, launch a hydrogen export pilot program, further develop solar “off the back of” onshore gas and become an “energy powerhouse,” selling our electricity to the East Coast.

It is a feature of Territory political life that voters ahead of polls don’t get solidly researched and costed options, but ideas that somebody will look into after the elections.

The CLP says it will direct the “Utilities Commission to conduct a full cost/benefit analysis” of all of this, including “defining the optimal mix of renewables to maximise the stability, reliability and affordability of electricity in the Territory”.

And what if the Utilities Commission finds out all this is a complete nonsense?

Ah well, “we tried” would no doubt be the answer for the next four years.

Minister Wakefield has replied to our question: How much did the government receive from gas royalties in 2018/19?