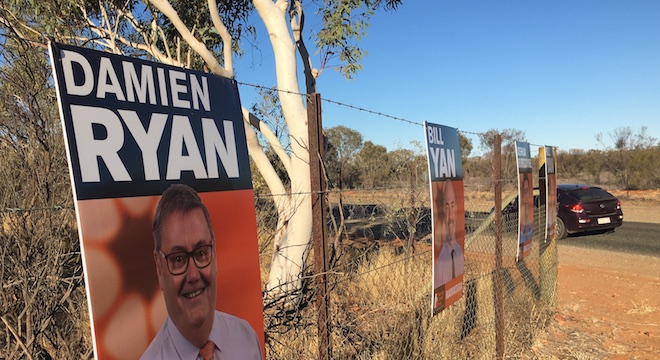 All election-related signs in council-controlled public places, including all non-arterial roads, will have to be removed today.

The issue was raised in council last night by Councillor Eli Melky, pointing to council’s very clear policy on the matter.

Election signage can only be displayed in council-controlled public places without a permit once the electoral roll closes. That date for the upcoming election is July 31.

Council and Territory policies used to align, explained Corporate Services director Sabine Taylor. The Territory Government changed its policy on June 3 this year but council was not aware of that.

The Territory policy has allowed election signage on its road reserves from July 11.

Watch out now for the proliferation of candidates’ posters along the Stuart Highway.

Ms Taylor confirmed that rangers had yesterday been asking for signage to be removed and issuing fines.

Cr Melky didn’t see a case for fining people but did want to see enforcement, with phone calls today giving the parties involved 24 hours to remove their signs.

He had raised the matter while in the chair of the Technical Services Committee.

When he asked whether any other councillors wanted to discuss it further, there was a loud guffaw from Mayor Damien Ryan (who is of course a candidate in the upcoming election and usually across all council policy).

He thought Cr Melky might have declared  a conflict of interest in the matter as president of a party (the Federation Party, fielding candidates in three seats, including former councillors Marli Banks and Catherine Satour).

There’s no conflict, replied Cr Melky – we don’t have any signage out.

The three major parties, Labor, CLP and Territory Alliance all have signs throughout the municipality, perhaps the independents do also.

Deputy Mayor Matt Paterson is a candidate for Territory Alliance. Their posters, in my observation, were the first out, weeks ago. So council has not moved quickly on this one.

A busy day ahead for the various campaign teams.

Note: A reminder to candidates about council’s requirements for election signage was posted on council’s website on 21 May.