Attuning readers to the tears of others 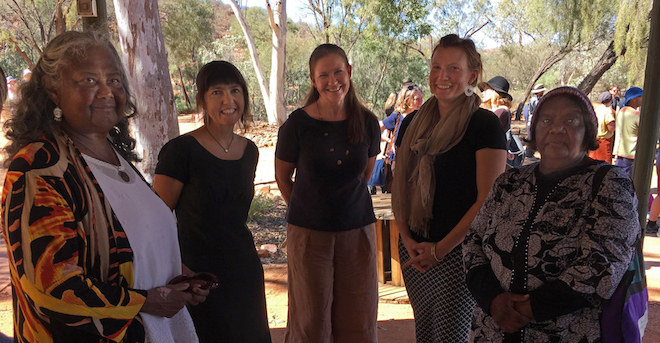 Above: Author Dani Powell, second from left, with the women who spoke at the launch of Return to dust, from left: Sylvia Purrurle Neale, Leni Shilton, Alex Barwick (MC), and Amelia Kngwarraye Turner.

More than 100 turned out for the launch at the Olive Pink Botanic Garden on 31 May, a testament to the high regard for Powell, whose unstinting support of other writers and literary culture has manifested in three exceptional NT Writers Festivals under her direction.

Dani Powell’s debut novel, which digs deep into matters of grief, comes to our attention as waves of mass grief sweep around the planet.

There are the breaking waves of grief over black lives lost to racist systems and the devastation of the coronavirus pandemic, which in the USA has been disproportionately costly in black lives (with countries in the Global South likely to follow). There is also the long deep tide of grief over the destruction of the planet.

So how does a short novel, which at one level is about a youngish white woman learning to grieve the loss of her beloved brother to cancer, stake a claim in this landscape awash with outrage, sadness and loss?

Its deep and broad attention, beyond the intimate and her own cultural sphere, is how.

Powell has attended not only to the experience of losing her own brother and her almost asphyxiating inability to grieve, but to the accumulation of losses all around her. Although this novel has been a long time coming, its author would not have been caught off guard by the particular social and political moment it is landing in.

If you think this means that the novel is full of death and dying and mourning (not anger so much), you are right, and that means it won’t be for everyone. The choice to go there or not might depend on how raw these experiences are for you.

But by telling these many stories in their varying and closely observed contexts, Powell attunes her readers to the tears of others, to how deeply searing into their being are the losses of their brother, their son, or as it may be, their sister, their mother – their beloveds. And to how this may play for a long time in their lives without those around them, even the most empathetic, being able to recognise it.

In Return to Dust we are closest, of course, to Powell’s central character, Amber, who in her day-to-day life comes across as capable and hardy. She drives alone for great distances in the desert, and shows a high degree of cultural agility in the Aboriginal lands and communities she is passing through (these are lands and communities she knows, and Powell knows, relationships nurtured over many years of employment). 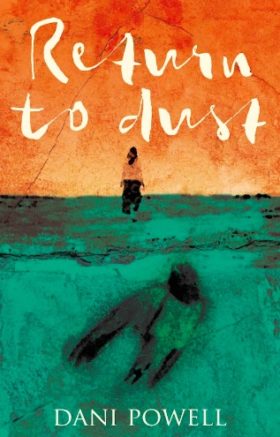 Amber is seemingly able to go with the flow, change her plans, forgo expectations of comfort, privacy, predictability. She shares food, shares her vehicle, her time.

All the while, she sits on an inner turmoil, her strangled grief over the death of her brother, so close to the surface that she is only just managing to hold on to her composure – a behaviour inculcated from childhood.

What eventually breaks through the carapace are the successive experiences around death and mourning that confront her in the Aboriginal communities she visits. These whittle away at her defences so that finally the healing hands of Mavis, an artist and ngangkari (traditional doctor), can penetrate them fully.

Powell’s convincing evocation of being in this Aboriginal world – descriptions of its environment, how people move in it, the interactions Amber has with them, their conversations – takes readers with her, into the space of being open to such experiences, receiving their offering. She skilfully avoids idealising and any hint of sentimentality; her account resonates with authenticity.

After Mavis’s healing, Amber is able to more fully integrate the loss of her brother, the memories of him and their family, into the life that she has made for herself, a long way from where they grew up together. She can dwell with those memories without anxiety now and she can face a dying friend, help him plan his funeral as he has asked, a request from which, at the start of the novel, she has fled.

The healing and the whole journey also helps reconcile her to the “schism within herself” created by coming to the desert, where “[s]he can never truly belong … but nor can she belong any place else”. This and many other observations of the ‘outsider’ experience of this place – such as the way time spent here nullifies the idea of ‘the middle of nowhere’ – will be appreciated by local readers and be instructive for others.

Perhaps because it is a novel made from the material of a memoir, Powell’s real life experiences, the narrative unfolds almost entirely inside the thought-track of its protagonist and within the framework of her thwarted grief. Relief comes from the sunny little intrusions by an Aboriginal child, Shyanna  (the names for her Aboriginal characters are well chosen). Shyanna jumps off the page, in her impish physicality and the acuteness of her child’s intuitions.

She also stands in opposition to the leitmotif dead child Amber carries within herself, a child figuring in a French story read to her long ago by her brother, lost in a sea of longing. Late in the book we learn of the way this story ends – of the life force that liberates her.

Powell’s Amber follows this trajectory – this mournful child and her watery domain cede to the savour of life on solid ground. This finally fills out the sense of the title, Return to dust. It refers, of course, to the phrase from Genesis, which on its own emphasises our necessary reckoning with death. But in its full context – two verses, which Powell quotes as the epigraph to the novel – it is counter-balanced by life, “You will eat bread”. Life, death, inseparable.