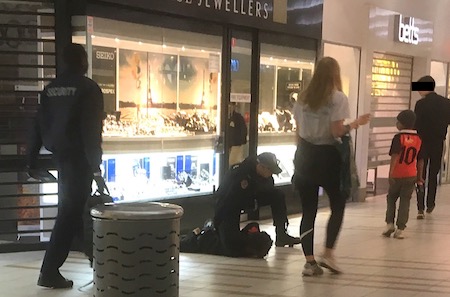 “Time to leave this crime sinkhole, so much money spent with no real outcomes,” reads a comment in a June 1 post on the Action for Alice 2020 Facebook page.

Police officer arrests a man in the Yeperenye Shopping Centre. Photo by the Alice Springs News.

The page is focused on crimes in Alice Springs, posting about break-ins, thefts. Often the posts will contain speculation, mostly about groups of youths out and about town, suspected of searching areas for easy targets for crime.

Frustration abounds. The sentiment that Alice is beyond saving runs rampant.

The selective way the police is providing information about crime is clearly driving the public to social media and its often rabid content.

That is a worry as Law and Order is likely to be a linchpin issue in August election.

The Action page has over 5000 followers. Another group, Alice Springs Community Open Forum – closed despite its title – has over 15,000 members.

While the Action page is generally pro-police, there is a disparity in the nature as well as the number of potentially criminal incidents reported there, as opposed to police media releases.

Throughout the months of April and May, Action posted about 65 crimes compared to the NT police media’s 29.

Many of these social media posts, particularly in early April, were on the topic of large groups of youths breaching COVID-19 restrictions.

Most reports by police regarding COVID laws were focussed on interstate travellers breaking quarantine rules.

One police release about a man fined for breaking restrictions regarding guests in his home on April 16 aligned with reports of partying overnight on the Action page.

Between April 18 and 20, both the police and the Action page posted on the topic of people from remote communities using back tracks to enter town, thus breaching restrictions.

When you take out posts relating to COVID-19, Action posted about 57 offences compared to the police’s 21.

Does the police have an obligation to post or issue media releases about every potentially criminal incident? Or just those they deem to be in the public interest? Are they the best placed to decide on public interest?

Clearly, if it were up to the commenters of the Action page, all of these incidents fall under that ever changing umbrella.

A source from NT Police Fire and Emergency Services (PFES) media says that they work closely with investigators to determine what requires a media release in regards to public safety and calls for information.

That suggests the police is using the media at its convenience rather than informing the public.

The president of the Northern Territory Police Association, Paul McCue, says the association plays no role in the decision of what offences warrant a media releases. 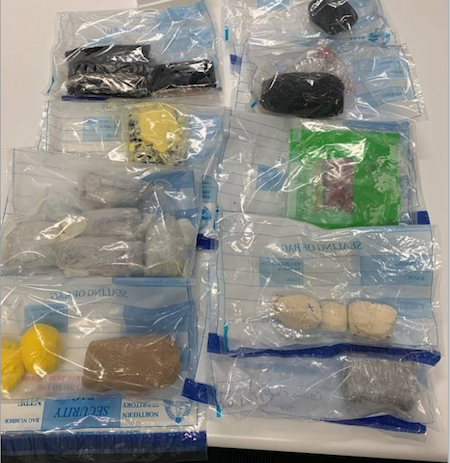 This is surprising because these releases, produced by in-house staff, are an important device for the police association’s members to communicate with the general public in a democracy.

On other issues Mr McCue does not hesitate to enter into political debate: “The government of the day needs to commit to funding improvements in these areas, including support for our officers through stronger sentencing legislation for assaults on police and emergency workers, an increased focus on welfare resources, and wider resourcing commitments.

“This includes for regional and remote areas of the Territory,” he said in a June 3 press release that also called for more support for police and less political interference in operations.

That is notwithstanding that the Central Command, the southern half of the NT, has three times as many police officers than the national average.

In a well publicised police association survey in February this year, filled out by roughly a third of the police force, 62.5% of respondents said they do not believe the government support police.

A worrying aspect of the Action page is the unfiltered nature of an open Facebook page.

Comments still slip through despite any filtering that may take place. Racism is not ubiquitous, but it does occur. The terms like “you know who they are” are often used.

One post, during COVID-19 restrictions, not by the admin, referred to a group of Aboriginal people as “filthy animals”.

Pro-police as the Action page may be, many commenters feel law enforcing is based on “catch and release” practices and must be tightened if the town is ever to get a handle on crime.

Some commenters feel harsher, more immediate punishments are necessary. One recent comment suggested alleged criminals should be shot at with rubber bullets. Another, that it is “high time they were met with a traditional hunting tool, [a] 12g double barrel”.

On the Action Facebook page there were fears throughout late May that with the easing of COVID-19 restrictions, crime would spike.

“Here we go again” comments riddled the page as the Territory worked its way back to the “New Normal”.

As flawed as the page is, their fears seem to have been prophetic.  A homicide in the early hours of Friday 5 June has been the subject of three media releases.

PFES media did not want engage with calls for more transparency on all crimes in the region.

The admin of Action for Alice 2020 was contacted but chose not to comment.

The Minister for Police, Nicole Manison, has been contacted but has yet to respond.

ERROR corrected: The version of this report posted at 3.19am today was corrected at 7.25am. There was only one, not two homicides.