Recovery: No help from oil and gas, says study 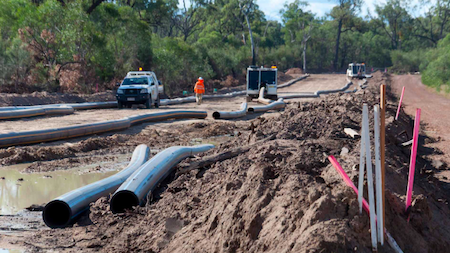 The Territory’s two conservative parties are supporting calls from peak industry bodies for an economic recovery commission as The Australia Institute describes the onshore oil and gas industry – meant to be an answer to the NT’s financial fiasco – as “a leaner, not a lifter in the Northern Territory”.

The institute’s research director Rod Campbell says: “Territory taxpayers pay far more to the onshore oil and gas industry than they receive from it.”

NT Government budget papers reveal that over the last decade $94m in subsidies and assistance measures have benefited the industry.

• Instead of funding the onshore oil and gas industry, this money could have paid the salaries of 104 nurses, 94 teachers or 94 Aboriginal health practitioners.

• Royalties are unlikely to ever cover these costs according to the Fracking Inquiry economic assessment.

The director of the Arid Lands Environment Centre Jimmy Cocking (at left) describes as a disturbing revelation documents which appear to show the NT Government is preparing to use public money to fund a gas pipeline from Tennant Creek to Darwin.

He says this is despite the increasingly dire state of the industry and at a time when gas fracking companies are indefinitely putting their operations in the NT on hold.

“Maps associated with the government’s call to tender show the pipeline would travel from Tennant Creek to a gas hub near Darwin where it could then be exported to Asian countries,” says Mr Cocking.

“But to do so at a time when companies, like Origin Energy, are announcing indefinite pauses on their projects is just madness.”

Meanwhile Opposition Leader Lia Finocchiaro (at right) says the peak industry bodies’ proposal has merit “but it also demonstrates clearly that business has lost confidence in the Gunner Government to fix the Territory economy.

Territory Alliance Leader Terry Mills says critically important decisions will need to be made, and the peak industry groups groups “need to be at the same table empowered to act together”.

They are aligned with the Territory Alliance’s pandemic recovery plans, he says: “Our proposed Territory Economic Rebuild Committee has representatives of key industry groups at the table. Importantly though we believe it is crucial for the Commonwealth to be included due to the significant infrastructure investment required.

“It beggars belief that with all our resources, pastural businesses, proximity to Asian market and past major projects that the CLP and Labor governments have managed to effectively bankrupt the Territory Government,” says Mr Mills (at left).

“We need to bring back the can-do approach that has worked.”

The following areas of the economy are, and will remain, significantly affected by the measures taken, says Mr Mills, and that will continue to exist as a result of the health imperative:

The direct impact on these sectors will continue to affect employers, sole traders, employees, rental and mortgage payments and will continue to result in a further economic downturn in the Territory Economy over the coming 12 to 24 months, says Mr Mills.

“This is compounded by the seasonal impact of the loss of a Dry Season peak trade. In addition, the Territory was already in recession before the COVID-1 9 health imperative measures decreased economic activity.”

Chris Zipf provided the following statement: I’d like to clarify and correct the misleading statement made by Arid Lands Environment Centre’s Jimmy Cocking about Origin putting operations in the NT on hold indefinitely.

In late March we announced that we would temporarily pause exploration activities at our Kyalla well site and reschedule further work to the second half of the year.

Our plan is that Northern Territory based employees and contractors will undertake the civil works like preparing roads and other activity necessary to move equipment in preparation for this.

We remain committed to our Beetaloo project which, if successful, has the potential to deliver long-term economic and social benefits for the Northern Territory and Australia, though for now we will continue to play our part in protecting the health and safety of communities across the Territory.