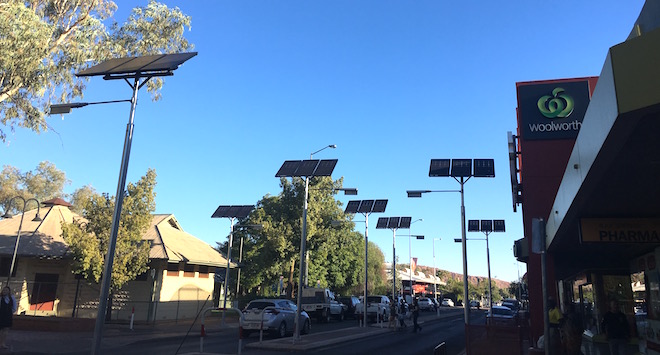 By KIERAN FINNANE
Last updated 9.17am.

The much derided solar powered street lights in Hartley Street may go.

Or they may be made to look pretty, with Town Councillors talking of commissioning artists to improve the aesthetics of the poles.

I think the approach is called “putting lipstick on a pig”.

And from the public comment I’ve seen the concern is less with the poles than with the obtrusive solar panels.

As one commenter on this site wrote, “the canopy should be of trees”.

Mayor Damien Ryan, who raised the matter at last night’s committee meetings, was not concerned about “the community backlash” but about the fact that the Department of Infrastructure, Planning and Logistics (DIPL) seems not to have known about the light poles and this has created “a roadblock” in relation to progress of the CBD revitalisation.

Mayor Ryan was also concerned, as were his colleagues, that councillors themselves had not been made not aware of what the lights would look like.

Had the matter ever come before them?

It would seem not, despite their site visits back in 2016 when the issues were first being discussed.

Who had designed the lights? he asked.

This did not become clear but Acting Director of Technical Services Takudzwa Charlie said they comply with Australian Standards, as required for infrastructure in a road reserve. He said discussions with DIPL can be a “bit long winded” and officers had decided to press ahead as per council’s original directive (to improve lighting in the area).

On this score, Deputy Mayor Matt Paterson and Councillor Eli Melky noted that the lights – “very bright” – meet council’s objective of improved safety in the area.

If council’s decision is to remove the lights – as public feedback suggests should be the case – officers will do as advised, said Mr Charlie.

Cr Marli Banks said council has a responsibility to respond to the community’s concerns. Council needed to decided if the lights are going to stay, and if so, what the scope is to improve their aesthetic?

Cr Jimmy Cocking wanted to understand how council got to this point. He suggested in the future making better use of the Public Art Advisory Committee when it comes to designing street infrastructure.

He also wanted to see improved processes to ensure better interaction between council departments (Technical Services and Community Development) and between council and DIPL.

Some relevant light on the issue (excuse pun) was apparently shed in council’s confidential papers.

CEO Robert Jennings, who had met earlier in the day with people concerned about the lights, said there were “learnings” council can take from the process, and on the specific issue, he is looking for “a win win” solution.