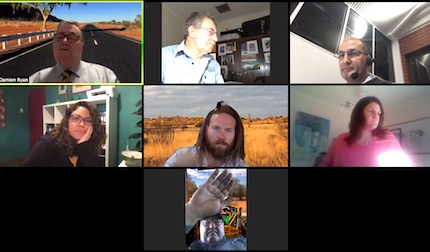 In a special meeting held on Monday, the May Day public holiday, Town Councillors voted to support a rates freeze for the coming financial year.

This represents a significant downgrade of the rates assistance proposed by Councillor Eli Melky in response to the COVID-19 pandemic, but came after officers warned that it was “too early” to proceed on any of the measures proposed by councillors. They would bring “inappropriate risk to the organisation as a result of too many unqualified variables”.

Examples of the identified variables included the longevity of the pandemic, with the potential of a second and third wave, and uncertainty around the advent of a vaccine; and on the economic front, evolving stimulus and assistance measures from the NT and Federal Governments, and uncertainty over when a recovery phase might begin, making it difficult to plan for.

Assistance largesse would obviously also have implications for council’s future resilience and the delivery of services.

Meanwhile, officers had proposed a $5m COVID-19 reserve, which was supported by all councillors. Its details will be fine-tuned over the coming weeks in budget deliberations, with confirmed measures announcement in June or July.

The suggested breakdown is a $1m package for non-commercial hardship cases; a possible $2.2m* to go towards CBD revitalisation depending on a breakdown of costs from the NT Government for the $20m total; and $1m to support operational responses, at the discretion of the CEO.

A contingency amount of $800,000 could go to commercial hardship cases if the NT Government assistance on this front proves insufficient (an allocation under their scheme, announced on 23 April, has not yet been advised).

After the motion to establish a $5m reserve had been supported, Cr Melky withdrew most of the rest of his package, but he sought and won support for a reduction in penalty interest on late rates, from 19% to 9%, effective from 30 June.

Deputy Mayor Paterson’s voucher scheme lapsed, technically for want of a seconder, but this was in the context of support for the $5m reserve.

Cr Marli Banks amended her motion to try to formalise the possibility of a waiver of rates, not only deferment, as part of the $1m package for non-commercial hardship cases. This was lost, as CEO Robert Jennings had already said, in response to councillors’ wishes, that officers would action that.

The charms of Zoom meetings are wearing thin, perhaps especially when they fall on public holidays. Mayor Damien Ryan appeared weary throughout and noticeably impatient with both the technology and Cr Melky.

*This seems to be additional to $2.7m  already allocated to CBD revitalisation, and comes in response to the NT Government demanding a contribution towards their promised $20m, which will go towards shade structures, lighting, “activation zones”, and the Kwatja water-play park.