Dale vs Dale in Braitling 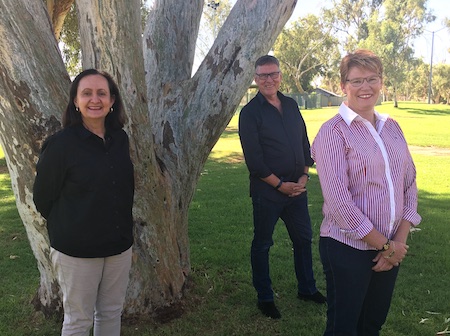 A third candidate is Scott McConnell, currently holding Stuart as an Independent but elected there as a Labor candidate.

During a media conference today TA leader Terry Mills, formerly a CLP politician for 25 years, hit out at the Gunner Government for failing to sort out, in four years, the national Aboriginal gallery project: “To me that’s symptomatic of a change that must occur.”

And with a long weekend approaching, and the lock-down lifted in major parks Top End parks, sitting TA member for Araluen Robyn Lambley lashed out at Mr Gunner, saying under pressure from decisions in WA and Queensland to lift some restrictions he had “raced in and made ill-prepared, ill thought out announcements around lifting restrictions in national parks.

“He hasn’t thought about anywhere apart from the Top End. To give people confusing, mixed messages at this time is not good.

“People are heading for a long weekend and they think they can go camping in Central Australia. Guess what, they are going to go camping.”

The Alice Springs News sent an email at 1.44pm today to Covidmedia asking: “Why is the West MacDonnell national park, except for Simpsons Gap, remaining closed?”

We have received no reply by the time of publication for this report.

As chairperson of Tourism Central Australia over the last few years Ms McIver, born and raised in Alice Springs and living in Braitling for most of her life, said Alice “could do with a genuine change at absolute grass level community input”.

NEWS: As a tourism person, what are your plans for after the pandemic?

McIVER: We’ve lost our flights, we’ve lost people coming into our town. We know Virgin has gone into administration so we don’t know what it’s going to look on the other side of the virus. We need a strong voice, particularly with the two airlines, but perhaps we need to start looking for some further opportunities.

NEWS: What kinds of specific initiatives?

McIVER: The national Aboriginal art gallery is going to be a gate to the town’s economic future. Tourism has been absolutely a supporter of it, and so is the Territory Alliance.

NEWS: With the Ayers Rock Resort all but shut down now, is that an opportunity for Alice Springs?

McIVER: It’s actually been a key to the success of tourism in Alice Springs. I know a lot of people have differing opinions on this, but Ayers Rock has fed Alice Springs for a number of years with the flights and excess coming in there. I think we need to work a lot closer with the Ayers Rock Resort and our operators out there. The Coronavirus is giving us a huge opportunity to move forward, have those conversations and see how we can do this better.

She described TA as “refreshing. It’s not about the backroom people making decisions, not selling preconceived ideas.”

Mr Mills expressed disbelief that Alice Springs, as a community “with such great potential is unable to make a decision about where an art gallery goes”.

A government headed by him would understand the community “but be courageous to ultimately make a decision.

“After the Coronavirus period people will be looking for real leadership that is informed by the community.”

In parliament last Friday “I was appalled to find a government prepared to shut down any conversation that did not suit their agenda. Territorians had an assault on the democratic processes of the NT.”

He says the election needs to be pushed out to October. “It will take at least two election cycles to get ourselves into a better position.”

Woolworths in Alice Springs has 5000 square metres floorspace. During COVID no more than 250 people are permitted inside. That is 20 square meters per person (including shelves, of course). The West MacDonnells national park measures 2,069 km². That is 2,069,000,000 square metres. With the population density in the Woolworth store applied to the park, it would have room for 103 million people, or some 20 million more than the population of Germany.