Lucky the Town Council isn't in the forestry business 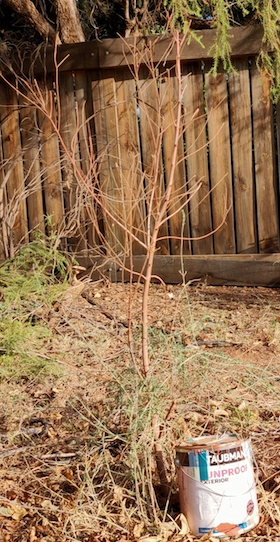 With reports of high staffing numbers at the Alice Springs Town Council I’m writing to share an insight into how some of them are spending their time (and our rates).

This little tree (1.2m) and recently denuded by processional caterpillars is the subject of an extraordinary and costly campaign by the council to remove it.

It’s a small tree, no worries. Check the paint tin put there for a size comparison.

I’ve planted many of the trees on the nature strip in my street and I planted this tree about 18 months ago.

When a new neighbour moved in next door she wanted the tree removed so she could use the space for a car park.

A Ranger called me and said the tree needed a permit or it would have to go.

I got the permit.

On March 10 two ASTC staff, one a manager, visited me.

The tree permit was a mistake they said, my tree needed a Verge Development Permit and I had two weeks to get one.

This permit is for a major development and requires an Aboriginal Authority approval.

I wrote to CEO Jennings querying this requirement.

No response with the clock ticking on tree removal.

I complained to the NT Ombudsman, challenging the permit requirement.

I wrote to CEO Jennings asking him not to remove the tree while my complaint to the Ombudsman was underway.

The Council has not responded to the Ombudsman.

He didn’t know about the Verge Permit: “That’s a different department.”

But he raised a new problem.

Will my little tree eventually exceed the height limitation for street trees?

I remembered it was a small tree but couldn’t recall the species.

An arborist will need to establish the species and report to him.

The Council arborist called and examined the tree.

So ASTC Rangers, ASTC manager visit, CEO, Aboriginal Areas Protection Authority, the NT Ombudsman, arborist, and no final decision yet on this little tree on the nature strip in front of my house.

What is this all costing?

I think I will remove the tree to avoid more waste of rate-payers money.

But I do get the impression the Council have too many staff with not enough to do.

The News invited a comment from the council at 11.57am today. None had been provided by the time of publication of this report.