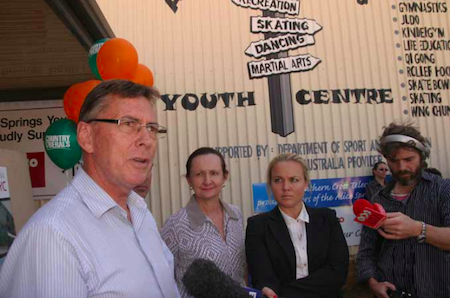 “I got to a crossroads. I’m watching the town crumble around me, people so desperate for hope and strategies to deal with crime.

Left: Mrs Lambley campaigning with Mr Mills when they were both members of the Country Liberal Party in 2012.  Much water under the bridge since then.

“I found myself in a  position where I couldn’t really make promises and couldn’t deliver as an Independent.”

This is “sole reason” for her decision to join Territory Alliance, says MLA for Araluen Robyn Lambley.

Territory Alliance is led by former Country Liberals Chief Minister and MLA for Blain, Terry Mills. He will join Mrs Lambley at a press conference in Alice Springs this morning.

“We need leadership in the town,” says Mrs Lambley.

“Now I can promise and now I can deliver.”

Her decision means that Territory Alliance will have three members in the Legislative Assembly, more than the official Country Liberal opposition.  Former Labor MLA  Jeff Collins, Member for Fong Lim, joined the Alliance on 9 March. 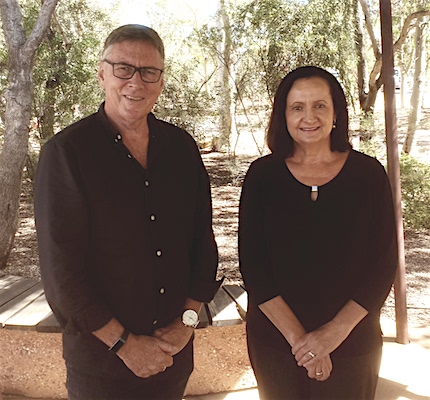 Araluen MLA Robyn Lambley has released a brief statement, saying that the party’s new status has been confirmed by the Northern Territory Legislative Assembly.

The Opposition leader is Terry Mills, Member for Blain.

Mrs Lambley is Deputy Opposition Leader, while Jeff Collins, Member for Fong Lim, is Leader of Opposition Business and Whip.


Terry Mills has formally made the case to Speaker of the Legislative Assembly Kezia Purick MLA for Territory Alliance to be recognised as the official NT Opposition.

The Alliance is “a fully registered and properly functioning political party”, he writes in the letter to Ms Purick of today’s date, and so meets “the test set down by the NT Solicitor-General in 2018 that we need to have a ‘public commitment to act cooperatively based on aligned ideologies.’”

With the powers provided to her and her office, he says it is Ms Purick’s “role to recognise Territory Alliance as the most numerary alternative party to government and [to] establish our status as the Official NT Opposition.”

As parliament sits next week, Mr Mills suggest it would be “prudent to make the necessary changes ahead of these sittings to allow us to exercise the very important role of NT Opposition within the Parliament with least disruption during that week.”

Those changes include funding arrangements and office relocations.