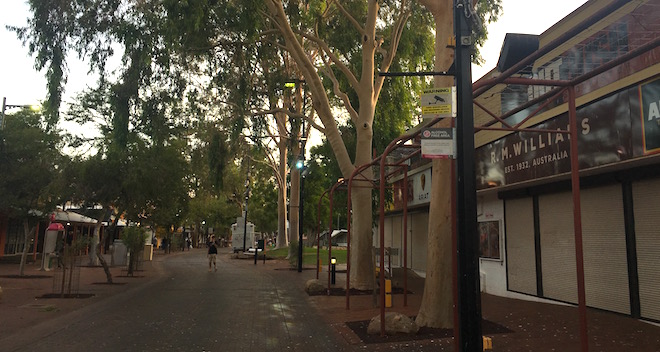 Above: Our un-vital CBD on the evening of 24 February.

According to Deputy Mayor Paterson, the Chief Minister said the CBD revitalisation was not going ahead because council haven’t invested any money.

“I don’t recall at any stage [council] being approached to invest” in the project, he said. Could the CEO confirm that this is the case?

Before CEO Robert Jennings could reply, Mayor Damien Ryan chipped in: “The Chief Minister said we had committed funds, which I have never heard in this chamber.”

Said Mr Jennings: “Officers are working on the principle that has not happened to our awareness.”

Director Technical Services Scott Allen added that the issue “has never been raised at the CBD revitalisation meetings that myself and the CEO attend. At this stage we are pushing ahead with the projects”.

However, Mr Jennings qualified his comment by saying that the cost of “running” the whole project will be borne by council.

The Alice Springs News is seeking clarification on what this means for council’s budget.

Meanwhile, Councillor Eli Melky asked that the council, at its next budget meeting, allocate “a sufficient amount”, which he expected would be “considerable”, to prepare for an approach by the NT Government to acquire any asset of the Town Council’s, including Anzac Oval. 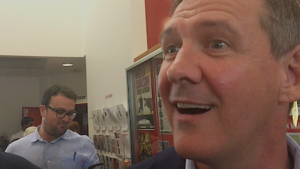 He was responding to reported comments by the Chief Minister at his “2020 – The Year Ahead” address, about progress on the national Aboriginal art gallery.

“We will talk with the Alice Springs Town Council about the land we need to get this art gallery built,”  said Mr Gunner.

“Let’s be clear, if we have to acquire it we will. If negotiation doesn’t work we will acquire. We will get it done.”

In response to Cr Melky, Mr Jennings said that preparatory budget work “has been done”, as Cr Melky had previously raised the issue.

Cr Glen Auricht commented on the “major opposition amongst ratepayers” to a change of use for Anzac Oval, as well as the opposition of Traditional Owners to the gallery going ahead at the Anzac Hill precinct site.

He said council hasn’t yet heard that the NT Government has received of any Traditional Owner approval.

Mayor Ryan said the Chief Minister has been asked clearly about this and “nobody has bothered to answer”.

Deputy Mayor Paterson said government had criticised council for its division on the issue, asked for a unanimous response, “we gave it to them, the ball is in their court”.

To the Alice Springs News, Cr Melky made clear that the budget line he is requesting will be used for legal action if necessary.

He estimated that “a quarter of a million” would be necessary “to make sure we’re in the game”.

He thinks there is support for such a fight “right across the chamber”; he has detected “no dissent”.

He said the Chief Minister’s comments undermine the “tireless” work on the project by the CEO and come “at a time when we don’t need any more negativity”, referring to the impact of COVID-19.

Although the Chief Minister may just be “talking tough”, council needs “to be ready”, said Cr Melky.

The News has asked the Chief Minister to comment on the issues raised in this report.

Note: Once again, Cr Jacinta Price was not in the chamber last night, attending the meeting by phone.

She has not been in the chamber at all this year. On 28 January, 24 February and last night, 16 March, she attended by phone. On 10 February she was an apology with sick leave.

Phone attendance is only possible for the open session of the meeting.

“Cr Price, we wish you good night as we move into confidential,” said Cr Melky as the open session drew to a close.

This means all the confidential business of council in 2020 has been conducted without the input of Cr Price.

Council CEO Robert Jennings has provide this clarification on council’s contribution to the CBD revitalisation:

“Alice Springs Town Council has not financially contributed to the CBD Revitalisation project, all contribution so far have been in-kind support.

“Council contributes in an ongoing maintenance and assets renewal capacity, which for example, over the life of an asset with the initial spend of $15million could amount to $35million in maintenance.

“Council is working closely with the NT Government, regarding this major infrastructure project, as it has a lasting legacy on the Alice Springs community and its assets.”