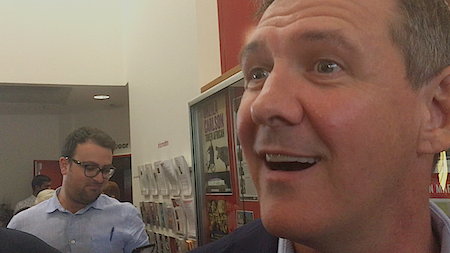 There was no Q&A, not even a doorstop for local media. It was a 22 minute monologue – to the speaker’s credit, delivered without notes. But then he didn’t have a lot to say that he hasn’t before.

They were representing people who reckon they have been sold out by the government over its fracking election promises, and were making the point that 56% of the recommendations of the Scientific Inquiry into Hydraulic Fracturing have not been completed and 3% not commenced.

Later those inside were told: “We are the party that protects water, banning fracking anywhere near strategic water assets. Water will be safe.”

But to avoid running the gauntlet of all those people brandishing yellow triangular signs, the speaker, 12th Chief Minister of the Northern Territory, Michael Gunner, arrived through the back door to deliver his big address for the year “2020 – The Year Ahead”.

Much of it was about spending money, of course, which has resulted in government debts amounting roughly to the total annual Territory Budget and requiring interest payments of around $1m a day.

With Mr Gunner’s predecessor Adam Giles having leased the Darwin Port for 99 years to a Chinese company with links to the military firmly in mind, the Alice Springs News exclusively put this question to the Chief Minister: “What is the collateral for your government’s borrowing?”

He knows, but he won’t say – “it’s a commercial arrangement”.

And with that Mr Gunner resumed the “meeting and greeting” yesterday in the early evening.

It had started with him announcing that the government would compulsorily acquire land if it didn’t get its way on plonking the proposed national Aboriginal art gallery into the CBD.

“We will talk with the Alice Springs Town Council about the land we need to get this art gallery built,” he said.

“Let’s be clear, if we have to acquire it we will. If negotiation doesn’t work we will acquire. We will get it done.”

Elsewhere in town there are “in principle” Indigenous Land Use Agreements with the native title organisation Lhere Artepe for five parcels and involving a “settlement package” – no amount disclosed. 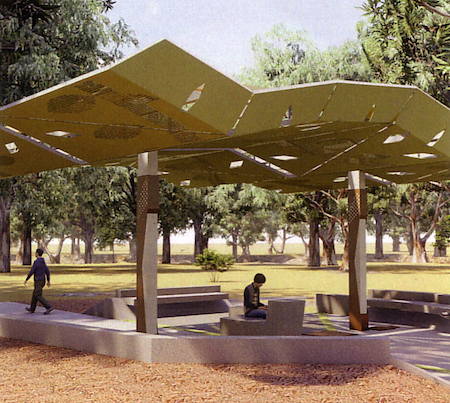 One large area is on the western side of the Stuart Highway opposite the Kilgariff Estate and behind the Transport Hall of Fame. This has been flagged as industrial land in countless earlier town plans.

Shade structure to in a “river activation zone”.

Another lot is north-west of The Gap at the base of the range, mentioned previously in connection with the gallery as the site where the present Anzac Oval rugby facilities could be relocated.

A third one is in the vicinity of White Gate, an informal Aboriginal living area.

Two more are west of Stirling Heights, and between the golf course and Stephens Road where a “seniors’ lifestyle village” is proposed. Expressions of interest are being sought, said Mr Gunner.

The company running the aircraft graveyard at the airport will get $1m in cash and $2m in concessional loans.

No explanation for this generosity was given other than “global economic conditions”. Mr Gunner spoke about “industry needs” – so why the handouts from the taxpayer?

$7m will be spent on upgrading the fibre optic network: “Alice will leave Adelaide for dead when it comes to fast internet.”

The Sitzlers will build 71 units for hospital staff accommodation, across Todd Street from the Melanka block.

The Exceptional Development Permit was granted on Friday for a “six storey building (to 21m) including one level of basement car parking, with shops / restaurant in a separate single storey building in two stages”. 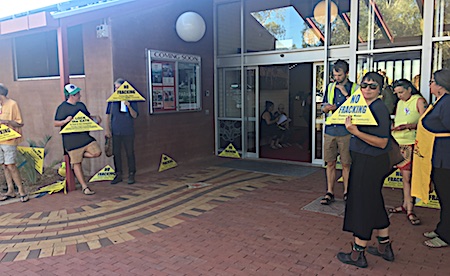 And there will be a multi-storey car park at the hospital: “Tender out this year.”

A lot more money to be spent in the region is someone else’s: Newmont is forking out $1 billion for expanding its gold operations in the Tanami, and SunCable may be spending $20 billion on the world’s largest solar farm, 22 million solar panels, near Tennant Creek, sending electricity to Darwin and Singapore through a wire.

SunCables’ heads, billionaires Michael Cannon-Brookes, co-founder of the software company Atlassian, and miner Twiggy Forrest, of Fortescue Metals, are proposing nine more such farms, says Mr Gunner. Some may be near Alice Springs.

The scale of the Corona Virus is not yet known, but “Territorians stick together” working on stimulus packages.

A clip was shown from Alice Springs born Lilly Alexander, “born and bred” and returning to Alice after university, as a “safe, vibrant and inclusive place”.

Mr Gunner said: “That’s the Alice I know. It’s the Alice we need to get back to. I know a lot of you are worried. You don’t always feel safe. I understand people’s frustrations.”

That was – predictably – followed by the “more police” drumbeat but then came a surprising twist: Youth crime is Canberra’s fault.

This is how it works.

Mr Gunner said he had learned from the police that “there are a lot of kids who are coming in from outlying communities.

“Why are they coming in? I learned that too. The unworkable changes that the Australian Government has made to the CDEP means many adults are stuck out bush without money.

“So, where do they come? You need money, you haven’t got it, you come to Alice. When the internet goes down in Utopia, and the cashless debit card isn’t working, where do you come? Alice.

“These policy and practical failures from Canberra are pushing problems straight to Alice Springs.

“We need the Feds to get involved, in a good way. No intervention, a resurrection.

And Mr Gunner said he told Ken Wyatt as much.