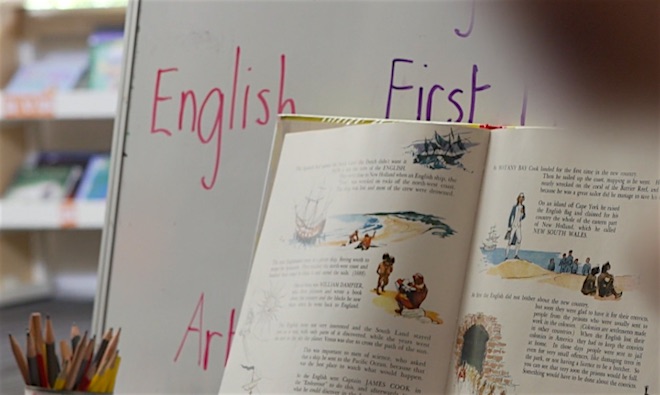 Above: The Australia Book as shown in the film. This image is a screen capture from the film’s official trailer, as is the image below of Dujuan in the classroom during this lesson.

The apparently whitewashed history lesson featured in the film In my blood it runs had more to it than was shown.

The film tells the moving story of Dujuan, a bright, thoughtful, charismatic boy, 10 when we meet him, with a loving Aboriginal family. Nonetheless he is getting into trouble, at school and on the streets, and is in danger of entering the justice system.

Following my review of the film, I received some angry off-the-record feedback on some of what the film showed was going on for Dujuan at school.

These were aspects which I had also commented on in strong terms, taking the film’s representations at face value – specifically, the use in class of a 1952 Australian history book, and a demoralising report card full of Es (the lowest score) sent home at the end of semester.

According to the feedback, The Australia Book by Eve Pownall  was presented to the children not as a text book but as part of a library lesson in which a range of materials and points of view were presented. It was suggested that the director had on film footage that would have shown this.

I was also told that the dismal report card was not the only feedback to Dujuan’s family: there was also a portfolio of work to take home at the same time, as something to be proud of, and the film failed to show that.

Given my comments about both matters, I felt obliged to follow up, in the interests of providing, in my own work, fair and factually based commentary.

To get answers, I approached Elizabeth Verstappen. The feedback had not come from her, but she seemed well-placed to answer my questions, having been the Sadadeen Primary School principal during the time of filming, now retired.

In the film we hear the teacher tell Dujuan and his class that The Australia Book “isn’t a story, it’s information” meaning “non-fiction or fact” and it’s about “the history of our country”. We hear the teacher read to them about Captain Cook’s voyage up the east coast to eventually claim “for the English country the whole of this new land”.

I wrote in my review, “There is no suggestion that any of this is up for discussion or commentary”, my impression arising from the cut to children being asked to identify on their work sheets words like Botany Bay, First Fleet, convicts, Arthur Phillip.

This is not, it would seem, a fair and balanced account of what happened that day in the classroom.

Ms Verstappen says The Australia Book “was used in conjunction with a number of other texts”.

Examples include Rabbit Proof Fence by Doris Pilkington Garimara, The Rabbits by John Marsden, illustrated by Shaun Tan, Kimberley Warrior: The Story of Jandamarra by John Nicholson, to name a few, she says.

“The aim was for the students to find out what each text presented as true, compare texts and discuss them,” says Ms Verstappen.

“In the presentation of The Australia Book, the introduction by the teacher explicitly pointed out that this was an old text, republished and representing views of the time in the illustrative style. It was not a history lesson, but one distinguishing fact from fiction.

“While the film maker videoed the whole lesson, the final portrayal was very selective and did not give the context of the lesson. The student who was the subject of the film was engaged and involved during the lesson, asked questions and took part in class discussion. The lesson did not cause him to disengage.”

The film’s production team, responding to my request for comment, say they “stand by the film’s depiction” of this lesson.

They say it “involved students being read to from the book and being asked to find words in photocopied pages from the book for ‘Captain Cook’ ‘English’ ‘Convict’ and so on”.

They say the lesson “resulted in Dujuan disengaging and being sent to detention where he was given lego by the principal to play with”.

Viewing the unedited footage would settle the question about these conflicting accounts. I have asked to see it and will update this report if I am accorded that opportunity.

In the film Dujuan is shown at his lowest point after receiving his end-of-semester report. Curled up on a bed, a tear runs down his cheek – it’s the only time we see him cry – and we hear him wonder, in a small voice, if there is something wrong with him. His mother Megan is also quite depressed about the report.

Two facts seem to be relevant for the way viewers will read these scenes. One is that the school does not have a choice about the A to E reporting. A source described it to me as an obligation that teachers “dreaded”.

That it is an obligation might not make much difference to the way it affects students and their families, but something else that the school does might – they also provide feedback to families in the form of student portfolios.

Says Ms Verstappen: “Portfolios of student work are presented to families at the end of each semester as a more accessible way of presenting student learning and showing the progress they have made during the year.

“The A to E report is a mandatory requirement that needs to be reported to families but as we want to show positive growth for our students, we prefer to supplement this with the portfolio, which students are justifiably proud of.”

About the report card, the production team says: “Teachers at Sadadeen as well as other educators who we consulted with agreed that the mandatory reporting system is damaging to a child’s wellbeing and self esteem. These educators wanted to see this kind of reporting come to an end and they were supportive of these scenes being included in the film.”

They don’t mention the portfolio, the film does not show it, so what Dujuan and his mother made of it we have no idea.

“Of course I recognise,” I wrote to them, “that the film can’t show everything, and that it makes a strong judgment call in favour of Dujuan’s point of view. But as the scenes will be taken for a factual account, and interpreted as having a broader application, do you think the omissions are justified? If so, can you explain why?”

I have provided their answers on the specific omissions above.

By way of general comment, under the heading “Consultation”, they wrote:

“In making the film, we consulted widely with Arrernte families, Elders, advisors, educators (including those who worked in the three schools we shot in at the time of filming) and other organisational partners.

“Our research indicated that these classroom incidents are not one-offs, but are both historically and currently representative of some teaching practices in schools.

“The discussion we want to have is about the larger schooling system. We thank Sadadeen and Yipirinya for their courage and leadership in being part of a film that allows Australia to have a larger national conversation about how to support teachers to do their job better. We hope the film can shine a light on the change needed at a systems level.

“The education system is failing to change the outcomes of First Nations students. This film reveals the impact of a range of educational failures on a child such as Dujuan. This film is made from Dujuan’s perspective – a perspective we rarely have the opportunity to see, listen to or to understand.”