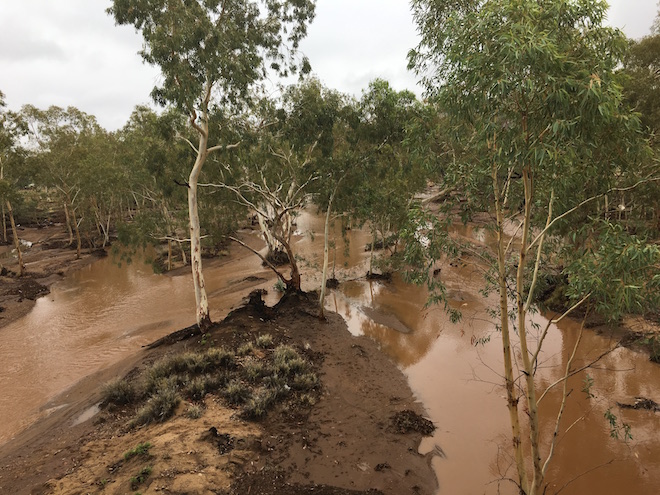 Above: A flowing Todd River after recent rain, viewed from the John Blakeman Bridge. This area, within the municipality, will never be fracked but there is still no exclusion over the Alice Springs Water Control District, of which the Todd, obviously, is part. All of Alice’s surface and groundwater systems are connected.

The Town Council wants local government across the NT to have an ongoing say in fracking, especially its likely impact on water, but Councillors  Jimmy Cocking and Marli Banks got their proposition over the line only by acknowledging that the controversial gas and oil production method could have good as well as bad consequences.

On the positive side of the ledger, at least in prospective shale gas basins – and ours is apparently one – could be improved knowledge of our water resources.

There is broad consensus that water exploration around Alice Springs is inadequate, with Mr Cocking agreeing with with Steve Brown – on the opposite side of the local political spectrum – five years ago, calling for bigger spending for drilling. (At the time Mr Brown was a councillor, but Mr Cocking was not; now the opposite is the case.)

When the NT’s fracking inquiry came to assess the water-related risks of the industry, its panel of experts realised that the available knowledge and data on the NT’s water resources – surface and groundwater – were simply insufficient to allow the risks to be assessed with certainty.

The inquiry recommended a “strategic regional environmental and baseline assessment” (SREBA) be made for any prospective shale gas basin, before production approvals, and that this should start with the Beetaloo Sub-basin.

Consultation on the draft framework for what the SREBA process will look like closes today (28 February).

The draft does not appear to identify a role for local government, although it does say the Department of Energy and Natural Resources “may establish a regional reference group comprising stakeholders who live or have interests within the SREBA region”.

While the Beetaloo Sub-basin is a relatively long way north, there are “granted petroleum titles” in prospective shale gas areas around Alice Springs, as the map from the inquiry’s final report clearly shows. 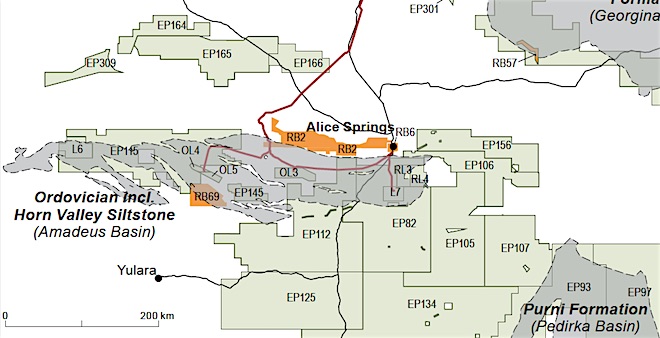 This brings the possibility of a future SREBA process in our region close to home. So even without a broader environmental interest in fracking and its impacts across the Territory, this future possibility should no doubt concentrate minds on having adequate means for local interest to be taken into account.

Councillors Cocking and Banks are both on the record with their long-standing and deep concerns about the industry and its environmental impacts, close to home and further afield. At last Monday’s Town Council meeting they tried to ensure, as mover and seconder of a motion, that local government concerns across the NT would be heard in the SREBA process.

They wanted council to back this motion as one that would go to the next Local Government Association of the NT (LGANT) general meeting, which will be held in Darwin mid-April.

Their draft motion called on LGANT to recognise “that development of the shale gas industry in the NT poses some significant risks for local communities, especially in relation to social, cultural and economic elements”.

And for LGANT to “move to create and support a representative group to ensure local government concerns are fully addressed” in the SREBA process.

Cr Cocking argued that local governments in regions where the fracking industry operates are likely to see and have to deal with a range of negative impacts, including “what is termed ‘boomtown syndrome’”.

This results from “unplanned rapid growth and associated social and economic issues including distorted housing and living costs, increased drugs, alcohol and prostitution”.

This boom bust cycle can be seen currently in Darwin, said Cr Cocking, but is also “reasonably well documented” around the world.

“The supposed economic benefits of these [large fossil-fuel] projects – and research suggests these are quite limited – do not accrue to local communities or regional authorities, not even to state governments.

“The reality is that most of the jobs are short term ‘fly in fly out’ jobs and the revenue stream largely flows to multinational companies.”

What happened to the motion was an exercise in the art of the possible.

Along the way, it also brought to front of mind that the matter of the permanent protection from possible fracking of the Alice Springs Water Control District is still outstanding.

Alice Springs municipality and airport have been declared no-go zones for petroleum activity; a two kilometre buffer around the town may also be excluded after consultation with the Central Land Council.

But as previously reported, the Alice Springs Water Control District covers a much larger area than that and is not protected despite the fact that council asked for it to be made a no-go zone during the government consultation on the matter. (See the Petroleum Reserved Block Policy issued in July 2019, following the consultation).

Straight up, Mayor Damien Ryan said he would speak against the motion, pointing out that the Mayors of Barkly, Katherine and Roper Gulf are represented on the community reference group for Beetalo, and suggesting that Cr Cocking’s motion was questioning their “expertise”, “treading on their toes”.

He also said that the process recommended by the Fracking Inquiry was “being followed very strongly”, and if work were to be done down here, a reference group (the Mayor called it “a panel”) would be created for this area.

Cr Cocking said the community reference group has “no real powers”, but rather “some advisory functions”. His motion was intended to ensure that LGANT is able to support the whole sector, rather than leaving it to the individual councils, and that local government  remains “continually engaged” on the issues (not just in the SREBA process).

Cr Eli Melky was also resistant, suggesting that Cr Cocking bring greater focus to the motion to get it across the line, noting that for him the bottom line has always been to “protect our water” with a “100% guarantee” that drilling through the aquifer is safe. (The industry will never offer such a guarantee; the standard they go by is that the risk will be “as low as reasonably possible”.)

Cr Glen Auricht had “difficulty” with Cr Cocking’s negative take on the industry, suggesting that the experience of gas well drilling near Hermannsburg – where he lived for 24 years –had been “very well managed”, good for the local area and the NT, providing better local roads, lots of Indigenous employment, and an income stream to communities, the Aboriginal Benefit Trust Account and the Central Land Council.

Trouble is, what Cr Auricht was talking about is conventional gas extraction, which has a decades-long history in Australia. The matter to hand is a different process: the resource is much harder to extract and requires “unconventional” methods.

This was pointed out by Cr Marli Banks: it’s “a new industry”, different and not as well researched as the conventional gas out at Hermannsburg.

She emphasised council’s existing motions of relevance: one, that the exploration moratorium not be lifted – it has been; and two, that the Alice Springs Water Control District be placed off limits to drilling – it still hasn’t been.

What she found concerning was that she doesn’t hear that position advocated strongly.

The intent of the motion, she said, was to get in place the “right strategic supports”, it was about creating “a voice across the NT”, advocating for the interests of local communities, to ensure that what has happened in Queensland (the boom bust experience) does not happen in the NT.

The promise of “income streams” is not enough for Cr Catherine Satour: “I don’t want Country to be damaged in exchange for money … there’ve got to be other ways”, such as the opportunities with solar, she said.

So, support and opposition from expected quarters. Cr Cocking was sensing that allowing for possible benefit as well as risk from the industry might see his motion go forward; it would be about local government getting ahead of the game, on the mitigation of risk, or potential maximisation of benefits.

Mayor Ryan started to come around, but warned that the reference to “support” should go, as it would be taken to “infer a financial support”, which would be enough to make the motion fall over.

The amended final motion speaks of LGANT recognising significant risks posed to local communities by the shale gas industry; of Local Government being fully engaged in the process to “minimise the impact and maximise the opportunities”; and, of LGANT creating a representative body to ensure that local government is part of the SREBA process.

Only Cr Jacinta Price voted against the motion. She had attended the meeting by phone but did not contribute to the debate.

Majority support for the motion means that Cr Cocking will be able to take it forward to the LGANT meeting, where he will have to find a seconder from amongst other LGANT delegates and effectively make his case.