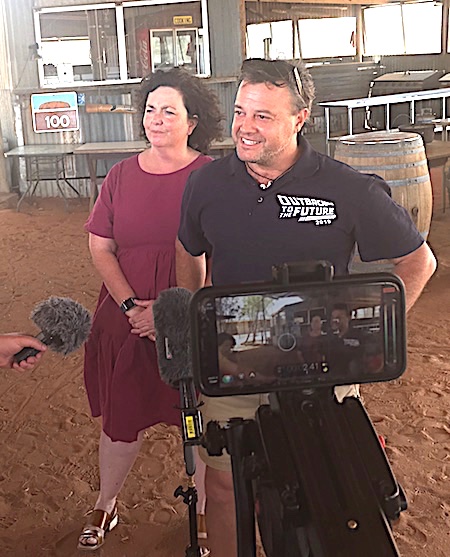 Cracks are beginning to show between Mayor Damien Ryan, now also a CLP candidate, and Labor front bencher Dale Wakefield, at a time when cooperation between local and Territory governments appears vital to get a handle on youth crime and the national Aboriginal art gallery.

Ms Wakefield was facing media yesterday with Dan Falzon, from the Earth Sanctuary World Nature Centre, announcing interstate schools can apply for $3,000 towards the cost of a trip to the NT as part of the government’s $2m Immediate Tourism Resilience Plan.

Ms Wakefield has suggested this week it may be a good idea that someone from the council who is not a CLP member is “in the room” when joint issues are being discussed.

She says perceptions of the Mayor’s bias can be managed but it remains to be seen how the council will handle that.

The Families Minister is clearly unimpressed that it wasn’t until Tuesday this week that she was informed about the council’s planned youth hub. (This is a pilot initiative, announced this week. Described as “educational”, it is an extension of library services, in a separate CBD building, during hours where a gap in youth services was identified. It will start in April, 2-6pm weekdays, 10am-1pm on Saturdays.)

She also bluntly expressed her concerns that past initiatives “to make sure the CBD is more attractive and people feel safe within it are not undone”.

Asked whether she herself had the perception that the Mayor had a conflict of interest she answered by denouncing the council’s “open letter” about law and order to Chief Minister Michael Gunner, published in the Murdoch press in December.

Ms Wakefield told media on Tuesday: “I was disappointed … to see that letter in the paper when the Mayor has my phone number.

“He could have called me directly. He also has the direct number of the Chief Minster.

“There are other ways this could have been dealt with. It was an interesting move to put that as an ad when there is such a significant concern around crime rather than proactively working towards solutions.”

Ms Wakefield said about the Mayor: “He is saying there should be a change of government. I am working with him as the Mayor and [I] as a local Member. There is a distinct political element to that.

Ms Wakefield said about the council’s Youth Hub and initiatives in the Mall: “I would hate to see the good work that’s been done to manage that – undone by additional service delivery.

All smiles earlier in the week, at the opening of the Albrecht Oval grandstand.

“Council is managing an issue at the library, so we are happy to work with them but it needs to be part of that whole plan …  the work that has already been done.

“We think it’s important council are part of the solutions, that it’s great they are using ratepayers’ money to address one of the issues that ratepayers have been raising with us over a long period of time.

“It needs to be part of a co-ordinated whole, we cannot have agencies going out there and doing a part. We are hopeful the council will be part of that process.”

Ms Wakefield said personal cooperation is more appropriate than “putting public servants and employees of the council in what could potentially be difficult positions”.

This was clearly a reference to Mayor Ryan emphasising yesterday that the gallery issue is currently being handled at “officer level”.