Home Issue 20 Cr Auricht: All the way with USA on fate of Assange
Issue 20Issue 21Volume 25

Cr Auricht: All the way with USA on fate of Assange 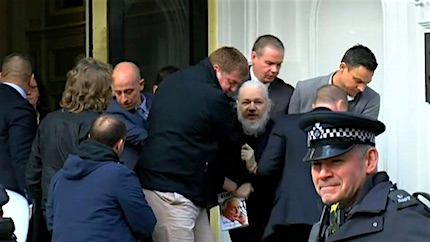 The petition was straightforward: that the Town Council call on the Australian government to demand the release of Julian Assange and arrange his repatriation to Australia. It was signed by 111 Central Australians.

Right: Mr Assange being removed from the Ecuadorian Embassy in London after the country withdrew his asylum status. The photograph heads a petition to Free Julian Assange on change.org, started by veteran broadcaster Phillip Adams.

It was presented to council at last month’s ordinary meeting and was on the agenda for debate in last night’s community development committee meeting, with Councillor Jimmy Cocking in the chair.

As it came up, a flurry of consternation. Cr Eli Melky left the chamber declaring a conflict of interest: the American government is a major client of his business.

Cr Jamie de Brenni grumbled that he is not a member of the UN or a Minister and that he would like to get on with talking about core business – things like reporting on the record number of entries (600+) in the Alice Prize.

Cr Glen Auricht wanted to shut down debate all together: it was “in real conflict with our community,” we have “a very large American contingent in town” who “work with the town on many many issues”.

Organisers of the petition were in the public gallery. “That’s the problem,” one of them called out.

It was “a direct conflict of interest for the council to be involved in any way with this petition,” continued Cr Auricht.

A bit of background: Julian Assange is in Australian citizen, and as such he entitled to consular protection by the Australian Government. His supporters are concerned that the government’s efforts are not great and the government is saying nothing to reassure them.

Mr Assange is the founder of Wikileaks, which shot to international prominence in 2010 when it made public a cache of military documents on the Afghan and Iraq wars, leaked by former US soldier Chelsea Manning. The release included footage of a US helicopter shooting Iraqi civilians – arguably a war crime.

Mr Assange is currently gaoled in Britain, facing extradition proceedings to the United States. There he would be tried for multiple offences under the Espionage Act, and if convicted, could spend decades in gaol – the possible sentence is calculated as up to 175 years.

He has become the focus of an international campaign, concerned to protect his human rights – including his right to humane treatment in prison and fair access to his legal team – as well as the right to free speech and a free press more broadly.

Supporters include the Parliamentary Assembly of the Council of Europe – 324 parliamentarians from its 47 member countries. In January they passed a resolution on media freedom, declaring that the detention and prosecution of the Wikileaks founder “sets a dangerous precedent for journalists” and calling for his prompt release.

What Mr Assange did in Wikileaks, it is argued, is what many a traditional news medium has done and will continue to do – publish, in the public interest, leaked material, even classified material, and protect sources. Examples in the Australian media have been made famous by AFP raids in 2019 on the offices of the ABC and the home of News Corp journalist Annika Smethurst.

In our 26-year history, the Alice Springs News has frequently dealt with leaked material and whistleblowers. Doing so is part of “that check upon government which no constitution has ever been able to provide”, as proclaimed under our masthead in a famous quote from the Chicago Tribune.

Back to the council chamber: Cr Cocking coolly explained that the organisers had brought the petition to him to submit to council as the level of government closest to community. If there was support in the room, council could write a letter to the federal government.

Cr Marli Banks thanked the members of the public attending, acknowledging that they “feel passionately” about this issue.

She said she understood that other Elected Members may feel it is not council business, but she was happy to give the motion to write a letter her support.

Deputy Mayor Matt Paterson said he would not support it, as it is “well outside our obligations”.

“Others councils have done it,” interjected a supporter in the public gallery.

Cr Banks said she was happy to second the motion, “as a matter of natural justice”.

The motion will now carry through to be voted on at the Ordinary Meeting at the end of the month.