Home Issue 20 Between the sun and the moon, the spirit of David Nixon
Issue 20Volume 25

Between the sun and the moon, the spirit of David Nixon 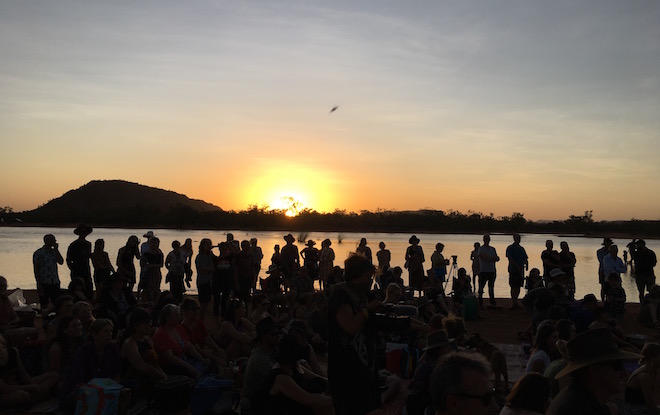 David Nixon, much loved family man, friend of many and Central Australian film-maker of great gifts, died on 17 January. He was 53 years old and had been diagnosed with pancreatic cancer just three months earlier.

He was remembered and farewelled at the Ilparpa clay pans on Saturday, as he had asked. He couldn’t have known that rain would have filled them and they would be at their most beautiful, reflecting the symmetry of beginnings and endings as the sun sank and the moon rose.

We walked in bare feet in his memory, through the life-giving waters, to scatter his ashes there and send some skywards too, in a burst of fireworks.

He faced his death with exceptional openness, generosity, courage and acceptance, carrying towards it a lesson he had drawn from life much earlier, as his sister Kerry told us, that “no matter where you go, there you are”.

It was a terribly hard dying, for him and and those closest to him as they cared for him, but, said his second-born son Tom, there is “a certain beauty to a death” – the way his father met it, no doubt, and in the way we come together around it.

The Alice Springs News thanks our dear friend Dave for his stimulating conversation and generous collegial support over many years, we salute the outstanding cultural legacy of his film-making, and extend our deepest condolences to all who love him. 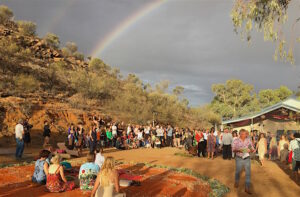 Country, people, cultures come together to heal a sick man