Assange must not be abandoned 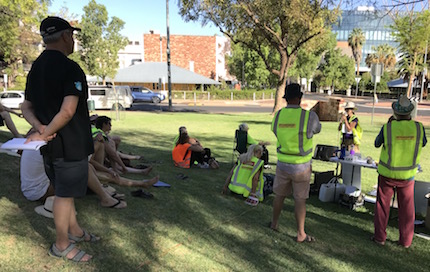 
We should be ashamed of our government for what they are not doing for Julian Assange.

That was the message conveyed at the rally held in Alice Springs on Saturday, January 25.

A group of supporters protested the inaction of the Morrison Government. Part of the message we need to send to our government is “Stand up for Assange”.

People need to mobilise in order to free this man and not expect they/we will get support from the government. There has been a groundswell of support for him internationally and it is coming from many quarters – doctors, teachers and other ordinary everyday working people including the Yellow Vests Movement from France who are protesting at Belmarsh Prison, UK where he is being detained.

Notably, it was reported in The Canberra Times that Assange had  recently been moved out of solitary confinement in Belmarsh Prison, UK after protests from the inmates who also viewed his treatment as inhumane and political grandstanding in support of the US.

WikiLeaks ambassador Joseph Farrell concluded that while “the move is a huge victory for Assange’s legal team and for campaigners who have been insisting for weeks that the prison authorities end the punitive treatment of Assange” there is much more yet to be done with only weeks left to call out this violation of his human and legal rights.

His legal representatives have expressed fears for his current mental and physical health deterioration, a symptom of his isolation and persecution. He is still being denied adequate access to his lawyers while facing extradition to the United States of America. The UN Special Rapporteur on torture, Nils Melzer, fears that Assange could die in prison.

As Assange awaits the hearing set down for February 24 – an application to extradite him to the US where he will face charges of spying and a likely sentence of 175 years – he must not be abandoned.
He is an Australian citizen who is being wrongfully held in prison.

The Secretary General of the International Federation of Journalists (IFJ) spoke to the Council of Europe on January 27 in Strasbourg, stating that Julian Assange has become the number 1 public enemy of the United States, of President Donald Trump in particular.

He reiterated that the founder and former editor-in-chief of WikiLeaks is a member of MEAA, the Media Entertainment and Arts Alliance, the IFJ affiliate in Australia. Assange also holds an IFJ press card.

The voice and publications of the Socialist Equality Party, who have been running a very public campaign to free him, have condemned the detention of Assange while supporting the international calls to have him released unconditionally and returned to Australia.

In recognition of his multi award winning journalistic work IFJ continues to denounce the “arbitrary and scandalous conditions of detention” stressing, “Journalism is not a crime. Julian Assange must be released”.