Councillor Eli Melky can’t be faulted on persistence: he gave notice at last night’s council meeting that he would bring to a future meeting another youth curfew motion, or rather a CURFEW motion. 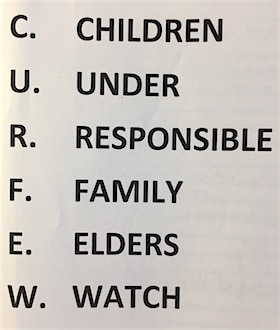 The acronym stands for “Children Under Responsible Family Elders Watch”.

Right: From a leaflet distributed by Cr Melky last night.

“It was staring us in face all this time,” said Cr Melky,.

He said he had consulted with Elders about the high levels of juvenile crime at night, a worry for them too, and it was they who had kick-started the ideas for acronym and its meaning.

The path forward would be by way of a public places by-law, which council itself could pass and enforce. It, like all by-laws, could also be enforced by police.

He said his proposal will take into account the concerns of those who have not previously supported a curfew.

The last time a curfew was rejected was at the December 2019 meeting. That was Cr Melky’s fifth attempt.

CEO Robert Jennings last night suggested the issue could be discussed at the February forum (closed to the general public). He would provide research and advice.

Cr Melky also raised the letter to the Mayor from Minister Dale Wakefield in response to council’s decision to support the Anzac Precinct as the preferred location for the proposed national Aboriginal art gallery.

This was also a decision of the December 2019 meeting, but had the important proviso that the government provide “evidence of custodian support of the location”.

In her letter of December 24 Minister Wakefield does not mention any such evidence, saying only that she will ensure that council’s support for the location will be “incorporated” into the ongoing “Aboriginal consultation”.

That is “a concern” for Cr Melky. Evidence of support from Aboriginal stakeholders is a “strict condition” of council support, he said.

Mr Jennings acknowledged that condition as a “key item” in the discussions he will have on the matter with the Department of the Chief Minister.

It was not mentioned in council, but neither did Minister Wakefield’s letter mention Anzac Oval as a sticking point, in contrast to the comments made to Alice Springs News in December, when she reiterated the government’s vision for the gallery at Anzac precinct: it “takes in both the old school site and Anzac Oval and factors in substantial green space out the front available to the community for all kinds of events and activities”, she said.

Council will work to develop an MOU with the Redtails Football Club (and the Pinktails and Right Tracks program) “to address their short term needs and set a long term strategy”.

Cr Marli Banks proposed this motion last night, after hearing its founder, Rob Clarke, speak at the Australia Day ceremony of the club’s need for a home.

The club  is a positive story coming out of Alice Springs when there are so many negative stories, she said, pointing in particular to the rising star, Nigel Lockyer Jnr, who trains with Mr Clarke and has apparently been drafted by Essendon FC.

The council has already been working with Mr Clarke, particularly around scheduling access to ovals, but Cr Banks’s motion, seconded by Cr Jacinta Price, will be a “trigger” to do more, said CEO Robert Jennings.

Cr Jimmy Cocking noted that the issues had been before council since 2012, and stressed the need for a long term sustainable solution.